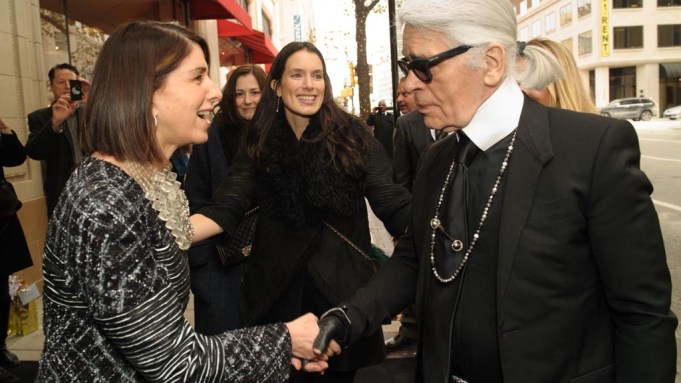 DALLAS — Is there anyone besides Karl Lagerfeld for whom Neiman Marcus would close its flagship for four hours during the rush of the holiday season?

The retailer rolled out the red carpet for Lagerfeld Wednesday with an awards presentation and luncheon attended by about 100 people, including about 80 devout, Chanel-clad customers from five states and as far away as New York and California. The ceremony capped the designer’s Métiers d’Art collection that made its debut the previous evening.

“They say that things are bigger and better in Texas and last night proved the point,” said Karen Katz, Neiman Marcus Group chief executive officer. “It was extraordinary.”

Katz noted that it was logical that Chanel staged the show here because the city and state are booming.

“We Texans do have a style of our own,” she said. “Some of our reputation of our Texas style is fact, and some is fiction. When it comes to big hair, that is all an urban myth. However, when it comes to makeup and clothes, there is a lot of truth that we love both. We are very proud that there are more hair and nail salons per capita in the state of Texas than anyplace else in the U.S.”

After presenting the award, Katz engaged Lagerfeld in an impromptu Q&A.

Vogue editor in chief Anna Wintour cohosted the event and gave heartfelt remarks in which she chronicled Lagerfeld’s many talents. “After having seen the spectacular Chanel extravaganza we were treated to last night, I understand why everything is bigger in Texas, and Karl has finally found a place that thinks and acts on the epic scale that he does,” she said.

Sitting front row for the ceremony was Lynn Wyatt, who was “blown away” when the designer told her the Texas collection was dedicated to her. “I mean, I can’t think of a compliment more special and more unique than that,” she said. “But aside from that, I loved the collection. It was refined but it had sex appeal. It was Texan with a refinement to it.”

The luncheon was held in the shoe salon that had been utterly transformed into a creamy room with crown moldings, a crystal chandelier and a host of white roses and tulips on the tables.

Geraldine Chaplin, whose star turn as Mademoiselle Chanel in the film “The Return,” shown before the show, had many amazed at its accuracy, said working with Lagerfeld was a pleasure. “Karl would give us pages and pages to learn, and he was very lenient if you didn’t get the words quite right,” she said.