Neiman Marcus is examining what stores to close as part of its bankruptcy process.

Neiman Marcus is considering pulling out of Hudson Yards or downsizing the site, among other potential closings by the luxury retailer around the country.

The Dallas-based Neiman Marcus Group filed for bankruptcy reorganization on May 7 and is formulating a plan of restructuring involving streamlining the business.

Sources said the list of locations being eyed for possible closures includes downtown Dallas; St. Louis; Ft. Lauderdale, Fla.; Natick, Mass., and Westchester, N.Y. Bankruptcy law enables retailers to get out of leases without penalty. No decisions on Neiman Marcus store closings or downsizings have been revealed and would depend on Neiman’s outlook on the stores, bankruptcy proceedings and negotiations with landlords.

However, The Related Companies, owner of the massive Hudson Yards mixed-used development on the west side of Manhattan, has begun marketing Neiman’s three-level, 188,000-square-foot space, two sources said. Related has been conducting “initial studies of alternatives” should Neiman Marcus vacate some or all of its premises at Hudson Yards.

“Our restructuring plan is focused on alleviating our debt load, not mass store closures,” said Amber Seikaly, vice president of corporate communications for the Neiman Marcus Group, when asked about plans for Hudson Yards. “We are confident in the performance of our overall store footprint. In fact, stores that have been open for more than a year prior to COVID-19 are four-wall EBITDA positive. That said, we always assess our stores based on our footprint to ensure it is optimal to enhance revenues and overall profitability, as well as how each store can best support our omnichannel strategy. Any related discussions with landlords are confidential. Currently, we have 13 stores open and intend to open seven more this week, and more in the coming weeks as local and state mandates allow and as we feel it is safe to do so.”

Since Neiman’s opened as the anchor retailer of The Shops & Restaurants at Hudson Yards in March 2019, there have been mixed reviews over the performance of the store. Prior to the bankruptcy and the onset of the coronavirus pandemic, Neiman’s executives indicated that the store was on or above plan. Some market sources have said it’s mostly the Chanel and Louis Vuitton shops, the Zodiac Room restaurant, the Mr. Stanley bar, and epicure area that are carrying the business.

Neiman’s decision to open a big store in Hudson Yards was controversial, raising questions about whether a city already filled with luxury stores needed another one, and whether tourists and people living and working in the city would shop at the new Neiman’s and other stores in the mall, considering it’s situated on the far west side of Manhattan, in an area that was devoid of retailing. Neiman’s executives, long before opening in Manhattan, knew Hudson Yards would be a gamble. Before Neiman’s agreed to open at Hudson Yards, Bloomingdale’s and Saks Fifth Avenue rejected overtures from Related, and Nordstrom came close to taking the site but backed out in favor of opening separate women’s and men’s stores on 57th Street near Columbus Circle.

To convince Neiman’s to open at Hudson Yards, on the fifth, sixth and seventh floors, Related is said to have provided very attractive lease terms, including low rent, as well as unobstructed floor plates, high ceilings, and windows, a concierge and express elevators on the Tenth Avenue side of the mall.

Neiman’s was originally planned at 220,000 square feet but eventually downsized to 188,000, sparking speculation that sales projections for the store had been revised. However, Neiman’s told WWD that there was no reduction in the selling space and that 30,000 square feet of space was taken out of back office operations and storage that was made more efficient, thereby saving some operating costs.

Prior to the opening, Neiman’s billed the store as a testing ground for services and experiences the retailer hadn’t provided before, and creating “a next-generation” store for the future. While elegantly designed with Italian stone columns and works of art from such artists as Frank Stella and Roy Lichtenstein, much of the innovation centered on food, with the epicure concept called Cooks & Merchants, Bar Stanley, and the Zodiac Room. There are also high-tech fitting rooms, a styling lounge,  many special services and a more open, fluid floor plan with fewer hard shops than other Neiman’s stores.

It’s not clear whether a Neiman’s departure from Hudson Yards would trigger co-tenancy lease clauses enabling other retailers to depart. 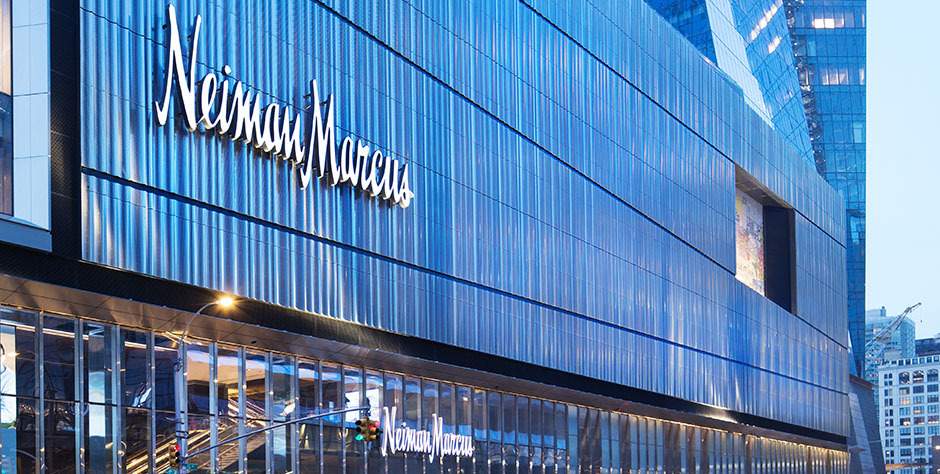