The rollout across the entire Neiman Marcus Group is a rare endorsement of a fledgling brand. 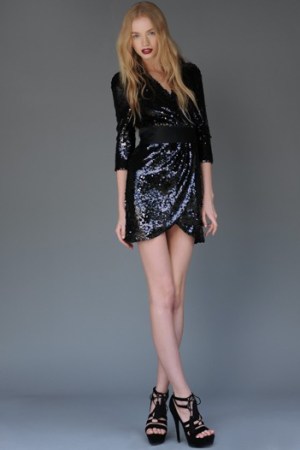 DALLAS — When Rachel Zoe heard the long list of retailers that ordered her first collection for fall, she went numb.

“It was this dream that I never thought would be reality because I was petrified — I was,” she recalled. “I feel so complete now becoming a designer and having my son. I’m that happiest that I’ve ever been in my life.”

No wonder. Nordstrom, Saks Fifth Avenue, Bloomingdale’s, Intermix, Selfridges, Kirna Zabête and Shopbop.com have purchased her label, Zoe said, though she has “no clue” what annual sales might be for the Li & Fung licensed brand.

Neiman Marcus is launching the celebrity stylist’s sportswear, handbags and shoes in July at all 41 doors plus online and at Bergdorf Goodman. The rollout across the entire Neiman Marcus Group is a rare endorsement of a fledgling brand.

Neiman’s backing is what brought her to a board room of the Ritz-Carlton hotel in Dallas with Mandana Dayani, her vice president, general counsel and chief wrangler, and Ken Downing, senior vice president and fashion director of Neiman Marcus.

“She is a real talent,” Downing said. “She understands the customer and she’s brought an effortless chic to the collection. The clothes are going to appeal to women of many ages. And, she’s got an amazing name.”

Downing gave her considerable guidance, convincing her “not to be afraid of color and prints” and to evaluate fabric weight and bulk, Zoe noted.

“I really put myself into what he was saying, and I really listened, and I don’t listen to anyone,” she explained. “He said, ‘I get these really heavy coats, and they’re fabulous and luxurious for people that live in, like, Iceland or, like, Antarctica, but the reality is you really can only wear them for four weeks because the climates are so messed up.’ It’s hot everywhere.…We made some changes.”

Dressed in a Rachel Zoe cream wool crepe tank dress with black velvet stripes, the celebrity stylist was calm, poised and free of both a camera crew and the frenetic quality that defines her on “The Rachel Zoe Project,” which begins broadcasting its fourth season on Bravo in July. Maybe that’s because she gave birth March 24 to a son, Skyler Morrison Berman. Now, she’s juggling motherhood with her demanding schedule by “really focusing” and not wasting time.

Next up: fashion jewelry for fall 2012. “I wish it were for spring,” she said wistfully. “I am dying to do jewelry. I’m gagging.”