Retailing is big business in Dallas and it's getting bigger, with an estimated 4 million square feet of retail space to be added this year. 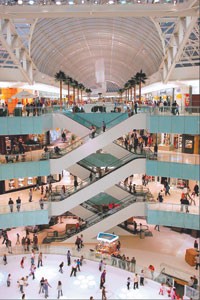 DALLAS — Wal-Mart has more stores in the Dallas metropolitan region than in any major market, the Galleria Dallas mall is the top local tourist attraction and there are said to be more shopping centers per capita here than in any other U.S. city.

Retailing is big business in and around Big D — and it’s getting bigger.

Luxury retailers and specialty stores, including Neiman Marcus, Stanley Korshak, Tootsies and Forty Five Ten, are etched into the profile here and others are rushing in.

Barneys New York is to open a flagship in the renovated and expanded NorthPark Center in the fall, where Nordstrom launched a 200,000-square-foot store in November and Michael Kors is to open a boutique in August. In addition, David Yurman jewelers opened at NorthPark Center in February, when Tory Burch unveiled her fourth U.S. boutique in the Highland Park Village shopping center.

These businesses represent a segment of an estimated 4 million square feet of retail space to be launched in the area this year.

The passion for buying has been propelled by a relatively affluent and youthful population that is as diverse as the local economy, which is nurtured by energy, transportation, insurance, sports and manufacturing firms, including Exxon Mobil and American Airlines, as well as technology companies such as Nortel and Texas Instruments.

There also is a rich retail heritage. The city began as a trading post in 1841 and Neiman Marcus was founded here in 1907. Now, the once moribund downtown is awakening with mixed-use development and boutiques, and Ross Perot Jr. is building Victory, a $4 billion complex that includes retail, entertainment, residences, hotels, parks, restaurants and office space.

“Dallas is filled with incredibly creative and visionary people who love fashion and use it as one of the different ways to express themselves,” Karen Katz, ceo of Neiman Marcus, said in an interview.

Experts differ, however, on whether Dallas and its environs might be reaching a retail saturation point.

This story first appeared in the March 15, 2006 issue of WWD. Subscribe Today.

“We may have too many high-end stores because of the perception of mall developers that Dallas is so wealthy and has so many high-income people,” said Bernard Weinstein, director of the Center for Economic Development and Research at the University of North Texas in Denton. “Yes, the metropolitan Dallas area has a relatively high median income, but still, it’s not comparable to suburban Chicago; Fairfax County, Virginia, or Beverly Hills.”

M. Ray Perryman, founder and president of The Perryman Group in Waco, Tex., an economic and financial analysis and forecast firm, disagreed.

“Dallas is a market that will definitely sustain some additional retail growth,” Perryman said. “The city has always been a mecca for retailers, especially higher-end stores, and the market has always sorted itself out.”

Still, not every retail venture here is an immediate hit. The Shops at Willow Bend in suburban Plano, a 1.5 million-square-foot mall with a Frank Lloyd Wright-inspired design featuring etched glass, cantilevered roofs and earth tones, opened in 2001 amid much fanfare as a high-end shopping destination featuring Neiman Marcus and Saks Fifth Avenue. The mall had to adjust its merchandising to reach a broader audience, experts said.

Most of the space built in Dallas last year was leased before completion at average rents of $14.50 a square foot and had an 89 percent occupancy rate. Dallas’ retail sales were up 4.7 percent last year, according to Dallas Federal Reserve Bank statistics.

“Dallas consumers love to spend money, and the city gives retailers a great multitiered insight into the consumers’ mind-set and shopping patterns,” said Alan Shor, co-chairman and president of The Retail Connection.

Per capita income in Dallas is an estimated $35,000 annually, compared with about $30,000 for the U.S. The unemployment rate in January — the latest figure available — was 5.1 percent, versus 5.3 percent in Texas and 5.1 percent nationally, according to the Texas Labor Force Commission. Dallas officials expect almost 60,000 new jobs in the city this year.

The Dallas spending is generated by 26 square feet of retail space for each person in the metropolitan area, compared with the national average of 14 square feet. The city’s position as a fashion destination also has been boosted by the Dallas Market Center, the world’s largest wholesale marketplace with more than $7.5 billion in annual transactions, and Fashion Industry Gallery, the boutique-style mart downtown.

Dallas has a median age of 30.5 years, versus the national average of 36 years, and a demographic that is 44 percent Caucasian, 30 percent Hispanic, 20 percent African-American, 4 percent Asian and 2 percent other, according to the U.S. Census Bureau.

“Retailers love to test new concept stores here because this region has ethnic diversity and a rapidly growing population that’s relatively young,” said Weinstein of the University of North Texas.

Big-box retailers have almost two-thirds of the city’s retail real estate portfolio; the rest is taken by shopping center developers and freestanding stores, including department and specialty chains as well as single-unit contemporary fashion stores that are new to Dallas, according to The Retail Connection.

Among the area malls that opened last year is Firewheel Town Center in suburban Garland, leading the way for retail development in far north Dallas communities such as Fairview, Frisco and McKinney, among others, which are experiencing major population growth.

Wal-Mart Stores Inc. said it takes in $1 out of every $3 spent on food and household goods in the Dallas-Fort Worth area. The world’s biggest retailer in January opened its 102nd Dallas-area store in the suburb of Arlington.

Wal-Mart is among many national companies, including J.C. Penney Co. Inc. and Saks Inc., that test new products and prototype stores in the Dallas area. In 2004 alone, Wal-Mart tested radio frequency identification technology in the region, Penney’s opened an off-the-mall concept store and Saks opened a store emphasizing contemporary and bridge fashion.

In addition to a young, diverse population with spending power, the city’s location — a relatively quick flight from New York, Los Angeles, Chicago and Mexico City — is a draw.

The 35-unit Neiman’s chain has four stores in the Dallas-Fort Worth metroplex, including a location at NorthPark Center that industry experts said generated an estimated $150 million annually and is consistently at or near the top of the chain’s highest-volume stores.

NorthPark Center in the fall completed the first phase of a $200 million renovation that houses almost 30 new stores, including a Nordstrom, the retailer’s fourth unit in Dallas-Fort Worth. NorthPark executives have projected the mall’s revenue at $615 a square foot. The mall expansion is to continue this year and feature H Hilfiger, Abercrombie & Fitch, Miss Sixty, Delia’s and Fossil.

“Our ongoing store development is a reflection of the growth in this market and our customers’ response to the company’s revitalized merchandising,” said Myron Ullman 3rd, chairman and ceo. “J.C. Penney has had an important presence in the Dallas-Forth Worth market for over 65 years….We have a special desire to be well represented in our own backyard.”

A mix of designer and contemporary stores entice Dallas’ wealthiest shoppers, and many are in Highland Park Village, an open-air, Mediterranean-style plaza built in 1931 that bills itself as the oldest U.S. shopping center and is owned by the Henry S. Miller family. Highland Park includes boutiques Polo Ralph Lauren, Chanel, Hermès, Luca Luca, St. John, Jimmy Choo, Escada and Calypso, the 23-unit New York contemporary chain that opened a 1,500-square-foot unit in July. Calypso owner Christiane Celle said women from Dallas frequently shopped at her other stores, especially in New York, and had encouraged her to come here.

“Dallas women are really tuned into fashion and stay well educated on trends and style because they travel the world,” Celle said. “I think they are much like New York women in the way they look to dress with an individual style rather than to copy.”

Jackie Miller Stewart, president of Henry S. Miller Interests, explained the area’s lure this way: “Dallas is temperate enough for its inhabitants to be out and about at all times, and it’s an extremely social and philanthropic city. At the same time, Dallas is lucky enough to experience every season and therefore is a great market for every line in a designer’s repertoire.

“The market also benefits from a strong tourism” and corporate base, she said. It “is not dependent on any one industry to support its shopping habit, so that we are not impacted as much by rising fuel costs or other factors that might affect other cities’ economies.”

Three miles from Highland Park Village, the Miller family opened the West Village shopping, restaurant, office and loft complex in the uptown neighborhood in 2001 at a cost of an estimated $50 million. The center became a draw for the neighborhood’s young and trendy residents. West Village’s vintage design is inspired by storefronts dating from the Twenties to the Forties with Art Nouveau and Art Deco influences. The tenant mix is strictly modern, though — women’s and men’s contemporary fashion stores, home furnishings and an art-film theater called the Magnolia. West Village generates about $475 per square foot in retail sales, excluding the theater.

“Herbert Marcus and then Stanley Marcus made Dallas feel like a fashion capital,” said Henry S. Miller 3rd, chairman of HSM Urban Partners, parent of Highland Park Village and West Village. “In 1931, Highland Park Village became the first shopping center in the country designed to accommodate the car. Combining the automobile and shopping really got things moving. Dallas has a history of being a diversified business center. We didn’t concentrate everything around one business. This created a more sophisticated culture,” where shoppers reflect a combination of East and West Coast tastes.

“The retailers that realize that thrive,” Miller said. “We want the East Coast formality and sophistication with the West Coast comfort and ease.”

Perhaps there is no better example of the preoccupation with shopping here than Galleria Dallas. Spread across 44 acres, the mall said it attracts more than 17 million visitors annually to its 200-plus stores, restaurants and ice-skating rink. Modeled after the open-air Galleria Vittorio Emanuele in Milan, the four-level Galleria Dallas has a domed glass roof, limestone floors, a sculpture by French artist Daniel Graffin and palm trees. The anchor stores are Macy’s, Nordstrom, Saks Fifth Avenue and Gap. The center opened in 1982 and was renovated in 2004.

“Dallas has a unique signature that’s about glamour, fashion and shopping that sets it apart from any other city,” said Peggy Weaver, Galleria Dallas’ general manager. “The women and men here follow fashion and always think about looking good. And they’re willing to spend the money to achieve those goals. It’s part of the city’s tradition, reputation and reality.”