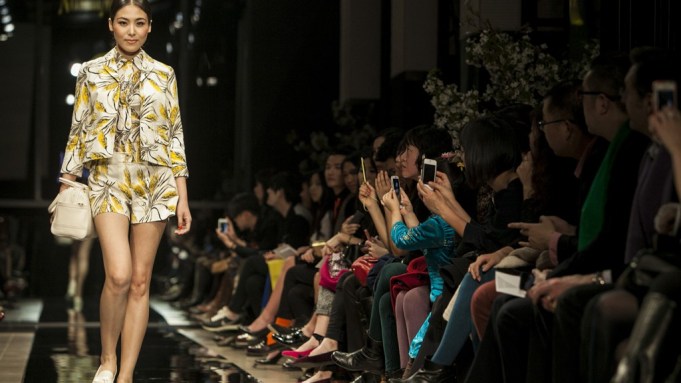 SHANGHAI — Neiman Marcus Group took to this city’s historic Bund waterfront to stage its first fashion show on the mainland in its latest bid to make more consumers aware of its recently launched e-commerce site in China.

The two-hour-long event took place last Thursday in what is now a closed Armani store on the ground floor of Three on the Bund, which is home to several high-end restaurants and an art gallery. It was a low-key affair. Only a few hundred casually dressed guests were invited, who organizers said were mostly customers or potential customers, as well as artists, musicians and socialites. Some had won tickets to attend via a giveaway that Neiman Marcus organized online.

Attendees sat around a catwalk that snaked through the former retail space, which was dimly lit and had little decor except for Neiman Marcus logos and flat-screen TVs showing live feeds of the show and other promotional videos. A short cocktail party preceded the runway show.

“I wanted to showcase the breadth of what we have but also wanted to be really trend-relevant,” said Downing, who was visiting China for the first time. He added that he included designers that he knew were popular in the country, as well as some who were less known here.

That morning, Downing met with local artists. Earlier in the week, he met with bloggers and journalists at another promotional event in Beijing that showcased designers and trends for the season. Thursday’s fashion show was covered by local Chinese video portals such as Youku.com and Tudou.com.

Last March the luxury retailer revealed it had invested $28 million in Glamour Sales Holdings, an Asian-based e-commerce site specializing in flash sales. Neiman has since invested another $10 million in the company and now owns a 44 percent stake in Glamour, which has helped the American retailer build its China business. In December the company launched neimanmarcus.com.cn.

Lindy Rawlinson, vice president and managing director of Neiman’s online operations in China, declined to discuss sales on the Chinese site. She said that the amounts consumers spend in one transaction here have been higher than those for Neiman’s e-commerce business in America and that there has been a notable amount of traffic coming from second- and third-tier cities across the country.

“We know that not everyone knows Neiman Marcus, and that is a challenge for us here,” she said. “Clearly it is something we have to continue to work on to expand the awareness with customers.”

Reaching out to key opinion leaders online, such as fashion bloggers, has been a key component of Neiman’s marketing strategy in China. Moving forward, Rawlinson said, the retailer will continue to ramp up both online and print campaigns to generate more brand awareness.

She said the entrance of other luxury e-commerce players to China, such as Yoox and Net-a-Porter, will help business by migrating consumers accustomed to shopping online for discounts to buying products on the Internet at full price. Competition is definitely heating up in the world of online retailing. China is now the world’s second-largest e-tail market, after the U.S., with estimates as high as $210 billion for revenue last year, according to a recent study by McKinsey & Company.

“The full-price market is growing,” Rawlinson said. “It is relatively newer in China. We all will complement each other and will help the market to grow.”

Neiman Marcus will hold similar events, ranging from showroom presentations to fashion shows, each season in China. Upcoming events will likely take place beyond Beijing and Shanghai, in second- and third-tier cities.