LONDON — Net-a-porter is planting its flag on Tmall’s Luxury Pavilion with a store that marks the start of a new joint venture formed by Richemont and Alibaba, which has been named Feng Mao.

Richemont said Monday that Net will be placed in the “key position” on Luxury Pavilion, and the flagship’s grand launch campaign will begin in the second week of October, after China’s Golden Week.

The online flagship will stock the latest seasonal collections from Net and Mr Porter under one storefront. At launch, the store will offer more than 130 luxury and designer brands. 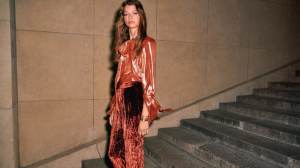 Richemont said the online store will feature curated homepages, customized brand pages, product recommendations, personalized content and exclusive VIP awards. The offer will be expanded in the following months and will include exclusive capsule collections.

Jérôme Lambert, chief executive officer of Richemont, said the unveiling of the flagship is “an important first step in the development of our long-term partnership with Alibaba. Together, we seek to address the sophisticated needs of the Chinese luxury clientele and capture this unique growth opportunity.”

He argued that the partnership will set new standards for the future of luxury online.

Federico Marchetti, chairman and ceo of Yoox Net-a-porter, said the JV is “redefining the way Chinese customers shop for luxury,” and said they will be offered personalized experiences and exclusive products.

Jiang Fan, president of Taobao and Tmall, said the opening “is just the beginning of a long-term partnership that will benefit China’s luxury consumers and the world’s luxury brands who want to reach them.”

Jessica Liu, general manager of Tmall Fashion and Luxury, described the Chinese consumer as “the engine of the global luxury market,” and said the new Net flagship store will help hundreds of brands reach Alibaba’s more than 670 million shoppers in China.

As reported last October, Richemont formed a strategic partnership with Alibaba Group to bring the retail offerings of Yoox Net-a-porter to Chinese consumers at home and those traveling abroad.

At the time, the partners announced the creation of two mobile apps for Net and Mr Porter.

They also said they planned to explore future offerings to enable the JV’s customers to enjoy “unique and seamless online and off-line shopping experiences” through digitizing and fully integrating the retail value chain, from merchandising and marketing to payments and last-mile delivery.