The Aventura Mall in North Miami Beach is betting $125 million on affluence. 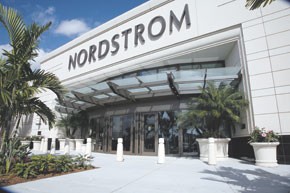 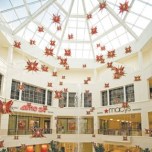 The Aventura Mall in North Miami Beach is betting $125 million on affluence.

That’s the price tag of a 232,000-square-foot wing that opened last month featuring Nordstrom and 22 specialty stores that are intended to attract wealthy international visitors and consumers from the region even as the U.S. economy navigates a turbulent period.

With sales last year averaging $1,200 a square foot, compared with $1,000 in 2006 and $500 10 years ago, the now 2.8 million-square-foot mall, which has 280 specialty units, six department stores and eight restaurants, is among the largest and most productive in the U.S.

“Only three or four malls in the country do that kind of sales,” said Herbert Leeds, president of Miami-based Leeds Business Consulting. “Aventura attracts high-fashion, trendy tourists and residents that remain remarkably self-indulgent.”

The center draws about 24 million shoppers annually who have an average household income of $79,000, mall officials said. In addition to locals, South American, Canadian and European visitors are shopping to take advantage of the weakness of the dollar. Last year, 40 percent of Aventura’s sales were from international customers.

The new wing’s stores and restaurants are a mix of domestic, regional and international players, said Joseph P. Tagliola, president of retail for Turnberry Associates, Aventura’s parent company, which built the mall 20 years ago. Several tenants, such as Boss Hugo Boss and Calvin Klein, are flagships or the brand’s first retail location in South Florida. Half of the wing’s units, which also include M Missoni, Lilly Pulitzer and Gilly Hicks, have opened and the rest are to make their debut by the end of summer.

In addition to the new wing, many stores launched in the core mall last year because 40 percent of Aventura’s retailers did not renew 10-year leases, Tagliola said. The turnover made room for Lacoste, Juicy Couture, Michael Kors, Theory and other contemporary and designer stores.

“We’re still new and growing into our potential in Florida,” said Pete Nordstrom, vice president, merchandising. “Short-term effects of the economy are everywhere, but we see it more in California, because we’ve been there for 30 years.”

Aventura is known as a “designer” store, a designation for about one-third of Nordstrom’s 157 units. Apparel from Burberry Prorsum, Jean Paul Gaultier and Versace is complemented by accessories, handbags and shoes from Dolce & Gabbana, Prada, Manolo Blahnik, Valentino and Marc Jacobs.

Nordstrom’s designer growth is “surprisingly strong,” Pete Nordstrom said. “We just plunk Chanel or Gucci product in a store like [the one in] Minneapolis’ Mall of America. You wouldn’t think of it as a Rodeo Drive, but the business takes off.”

In designated stores, Nordstrom expands designer product across all categories, and focuses on unique items.

“Our designer approach used to be haphazard,” Nordstrom said. “We know we can’t just offer a handbag — we have to drive it across all areas.”

Nordstrom is testing new ideas in Aventura. “Girlfriend” dressing rooms in the point of view department have moveable curtains that allow customers to try on clothes together. An apartment-style setting in juniors encourages teens to spend more time in the store.

Calvin Klein is to open a 10,000-square-foot store in Aventura on April 24, its seventh in a national retail rollout that began last year.

“We do well with Asian and European tourists, because our brand is known worldwide,” said John Walsh, president and chief operating officer of Calvin Klein Inc. “We’ve had one of our best years in Florida, with double-digit comp gains in our outlet business and good growth in our department store sales.”

“Aventura will draw from a wider trading area, and we’ll benefit from being near Nordstrom, where our customer also shops,” he said.

Atlanta-based Intimacy opened its second prototype — the first launched in Boston in February — and its fifth store in Aventura last month. The 3,000-square-foot store adds more designer and bra-size swimwear, from Carmen Marc Valvo, Karla Colletto and Panache, for the tropical demographic.

Owner Susan Nethero said Aventura had the highest potential of all locations. “It’s unique, because of the population diversity, the international tourism and the lack of bra-fitting specialists in the area,” she said.

Aventura’s expansion follows a $22 million renovation last year and the launch of Turnberry for the Arts Collection. Several site-specific permanent and rotating art exhibits by local, national and international artists are put on display. Jorge Pardo’s hanging butterfly lamps are suspended over the mall’s main fountain, and Julian Opie’s LED monolithic sculptures are life-size animated figures that appear to “walk” alongside mall guests.