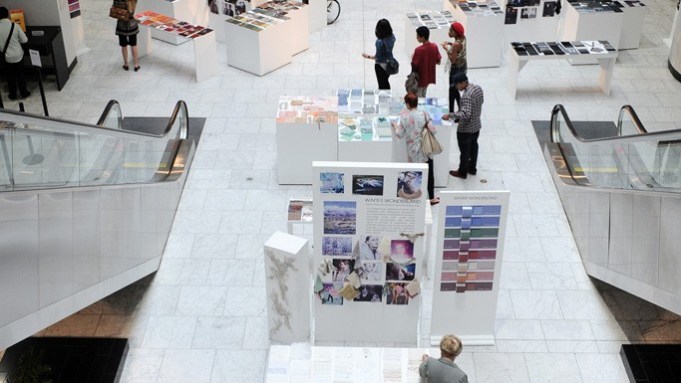 They also focused on renewed interest in U.S. manufacturing and the importance of sustainability.

Buyers and designers seemed ready to spend as they perused 221 mills displaying fabrics and trimmings for the fall 2014 season at the three-day show that ended Oct. 2 at the California Market Center here. Attendees traveled from as far east as Texas and Western cities such as Vancouver, Las Vegas, San Francisco and San Diego. They also included local designers ranging from small shops like Elaris Designs to global brands including Monique Lhuillier.

Texture topped the list of textile trends, followed by metallic lace, sheer materials and mixed media that juxtaposed a variety of fabrics. The prevalence of the color blue was evident in shades of sapphire, navy and aqua. Also answering to the demand for texture, denim incorporated characteristics of a knit. For jeans, the palette swung back to a classic blue after flirting with allover prints in vivid hues.

Zentex and Cinergy Textiles Inc. were some of the exhibitors that advertised a one-roll minimum for fabric that was in stock.

David Bloom, a representative at Los Angeles-based Zentex, which sells flannel, wool and corduroy and other fabrics produced in Japan, said the one-roll minimum helps manufacturers who would sometimes have to wait up to eight weeks for other mills to make the fabric.

Alisa Otten, designer at Original Concepts Inc., a design house that caters to the women’s contemporary market and costume and film businesses, said domestic production has come to the forefront among concerns from her clients.

“There are more things in play other than, ‘Does it look nice and does it have a good hand?’” she said as she inspected mirrored prints by KBC and Bel Maille’s knits that blended sheer and opaque layers.

Touting U.S.-made roots gave a “big-time” boost to Premier Prints of Sherman, Miss., according to Michael Hodges, vice president of merchandising. While its bright chevrons, stripes and other patterns are commonly seen on drapes, upholstery and bags, the company is trying to entice apparel designers with its lightweight, 4-oz. woven cotton cloths.

GPI Factory, a full-package contract factory in Torrance, Calif., participated in the expo for the third time with hopes of adding more U.S. clients. Japanese brands make up 70 percent of its business. Manufacturing everything from casualwear to high-end looks, baby clothes to pet outfits, GPI charges $8.50 to $40 a garment with a minimum order of 300 pieces for each style.

“Pricing is not cheap, but it balances out with quality and the Made-in-USA label,” said Tomoko Kitahara, assistant manager at GPI.

For some textile purveyors, quality came at a price, and designers were willing to pay it.

France’s Solstiss, which works regularly with high-end brands such as Rodarte and Sharon Wauchob, saw brisk demand for its lace, priced between $45 and $200 a yard for sampling. As lace continues to be a common motif in ready-to-wear, as well as eveningwear and bridal, designers sought extremes in the lace.

Designers also showed little resistance to paying for sample orders, in stark contrast to numerous requests for swatches during the Great Recession.

“You can tell the economy is doing better because everybody is looking for chic, fun, exciting and amazing,” she said. “There’s less pressure about the price.”

Spain’s RSP 51 took a wait-and-see attitude to determine if denim designers would balk in the end for its fabrics, which cost between $4 and $7 a yard. Among the popular pieces were denim that’s woven to resemble knits, jacquard denim and two-ply denim with a knitted face.

Textured sweater knits that highlighted nubs and slubs did well for The Knit House, a Lenzing Pavilion exhibitor that makes all of its goods, priced from $5 to $10 a yard, in Los Angeles.

China’s dominance in textiles and low pricing posed obstacles for foreign competitors. Jaipuria Silk Mills, which received good reception for its silk crepe and chiffon costing $14 to $19 a yard, said the biggest challenge is contending with Chinese mills’ prices.

“We can’t go down to that quality at all,” said partner Nita Jaipuria.

Hanna Friedman, who hand-looms knit sweaters that retail for $450 at Elaris Designs in Woodland Hills, Calif., was wary of foreign textile mills that require large quantities for orders.

Even the prospect of working on a small scale with designers such as Elaris appealed to first-time exhibitors such as South Korea’s Phillico. One of 20 booths sponsored by the Korea Trade Investment Promotion Agency and Korea Federation of Textile Industries as part of the 2013 Global Korea Textile Week, Phillico heard some complaints that its prices, set at $10 to $30 a yard, were too high, even with a minimum of 360 yards for a single style.

Hemosu Textile Co., also from South Korea, offered an extra perk to customers who bought its printed fabric costing $2 to $4 a yard: a transfer of the global copyright for the print design. That way, the customer doesn’t have to worry that someone else will use the same print without recourse.

“The copyright is very important for the printing companies and designers,” said Philip Moon, an overseas sales representative for Hemosu.