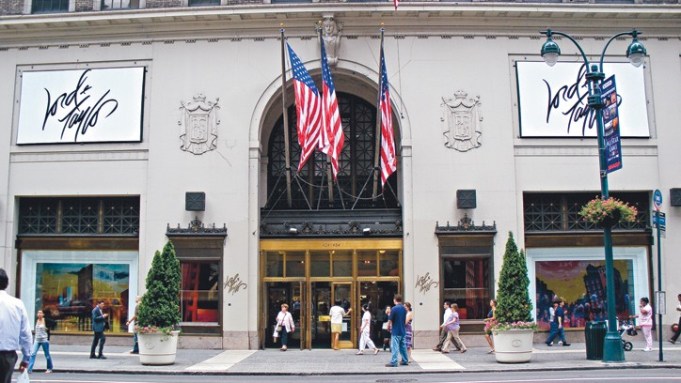 A shake-up at Lord & Taylor has hit the top ranks and could spread further.

On Friday, the company divulged that Jane Elfers, president and chief executive officer, is leaving and will be replaced by Brendan L. Hoffman, president and ceo of Neiman Marcus Direct.

Mark Weikel, Lord & Taylor’s chief operating officer, also will be departing. Weikel has been instrumental in partnering with Elfers in repositioning L&T, as well as improving the level of service and operations in the business. Hoffman takes over at Lord & Taylor on Oct. 6. News of the executive changes at L&T was first reported on WWD.com Friday afternoon.

Jeffrey Sherman, president and ceo of Hudson’s Bay Trading, is assuming a bigger role to expedite cost savings and centralize across divisions, such as back-of-house functions like accounts payable and information technology. In addition to The Bay, Zellers, Home Outfitters and Fields divisions in Canada reporting to Sherman, he now has oversight of the New York-based Lord & Taylor division. Hoffman will report to Sherman. Hudson’s Bay Trading also operates Creative Design Studio and Fortunoff.

“Jane has done a spectacular job,” Richard Baker, governor of Hudson’s Bay and ceo of parent firm NRDC Equity Partners, said Friday. “But her contract was up, and we came to the conclusion it was time for her to explore other options, and for us to move forward in our consolidation of executives. It’s a reorganization of management in order to capitalize on efficiencies.…There is a real opportunity for us to save money on the bottom line while continuing to move Lord & Taylor up market.”

Baker’s decision came suddenly to Elfers. When asked when she was informed about her future employment status, Elfers said Saturday that just a few days before, she still had on her desk a contract extension through 2011 that she was mulling. However, last Wednesday, she was informed the strategy had changed.

A 19-year veteran of Lord & Taylor, Elfers expressed sadness over leaving those she had worked with for so long, including the store’s three general merchandise managers who had all been on board for 15 years or more. “It’s been an honor to work with such a talented group at Lord & Taylor,” she said Saturday. “This team, coupled with the strong partnership of the vendor community, has accomplished a great deal. I am very proud of them.”

Elfers’ departure does seem surprising considering Lord & Taylor under her watch has been gaining traction, and generally retailers would prefer not to disrupt the organization just before the fourth quarter with crucial holiday selling approaching.

Elfers became the retailer’s ceo in May 2000 at age 39 and saw the potential for a revival long before NRDC bought the $1.4 billion chain in 2006 for $1.2 billion from Macy’s Inc., which inherited the business through its May Department Stores Co. acquisition in 2005.

She kept the chain going through years of corporate neglect at May and enough image and fashion issues to put any regional retailer out of business. While Lord & Taylor was still part of May, she triggered a huge downsizing, closing 32 stores over a few years. Lord & Taylor had become very moderate and coupon-oriented under the ownership of May, but Elfers eliminated much of the merchandise clutter, moderate offerings and pricing confusion, and redirected the business to better, bridge and contemporary lines to try to fit into a niche between Macy’s and Bloomingdale’s. She also started a branding campaign for a fresh image. She is free to join another company since she does not have any noncompete restrictions.

Baker and Elfers maintain the company has been profitable even through the current economic turmoil, and that it generally does particularly well in some suburban settings such as Scarsdale, N.Y. But there has been some question as to whether the chemistry was right between Baker and Elfers, particularly as Lord & Taylor evolved into more of a division of Hudson’s Bay Trading, from what had been a completely freestanding operation.

Filling Elfers’ shoes won’t be easy for Hoffman, considering many members of the team have long worked for Elfers. She has also been highly regarded in the marketplace.

Hoffman, however, as ceo of Neiman’s successful Internet and catalogues business, represents a modern and upscale package that will further the store’s image. The new ceo, who is 40, began his retail career in the executive training program at L&T and rose to divisional merchandise manager of men’s furnishings before leaving in 1996. He spent two years at the Bergdorf Goodman division of the Neiman Marcus Group as divisional merchandise manager of men’s before heading up the Last Call clearance division of Neiman’s. In 2002, he became president and ceo of Neiman Marcus Direct, where he established a strong record, growing Internet revenues from less than $100 million to currently just south of $600 million. Direct, including catalogue sales, is about $750 million in volume at Neiman’s. Hoffman also quadrupled profits to earnings before interest, taxes, depreciation and amortization of $130 million, and started doing Web sites for vendors, including David Yurman. Burt Tansky, president and ceo of the Neiman Marcus Group, will serve as interim head of NM Direct.

Though his experience running stores is limited to Last Call, at Lord & Taylor he will be backed up by Sherman, a retail operations veteran, and a former Bloomingdale’s president and former chief operating officer of Polo Ralph Lauren Retail.

“Jeff’s leadership is integral to creating a world class retail organization, and with Brendan heading up Lord & Taylor, Bonnie Brooks heading up The Bay, and Mark Foote heading up Zellers, we now have the team in place to do just that,” said Baker.

Baker added the executive reorganization enables Hudson Bay Trading and its subsidiaries to generate “sizeable economies of scale through improved purchasing, shared services, and more efficient utilization of information technology including Internet retailing. In addition, the subsidiaries will be able to benchmark and share best practices across the various organizations,” he said.

Baker also said Hoffman’s Internet experience will be tapped for the retail group which will become “much more aggressive going forward” seeking business off the Web.

The $8 billion Hudson’s Bay Trading Co. generates 85 percent of its revenues in the Canadian market, which he characterized as “very stable….We have tremendous opportunity at both The Bay and Zellers which are moving along well. In the U.S., Lord & Taylor continues like all of its peers to deal with the current economy and continues to perform better than its peers. We are making lots of money.”

“The real story,” Baker added, is that “we have assembled four of the hottest executives in North America in the last 60 days — Jeff Sherman, Bonnie Brooks, Mark Foote and Brendan Hoffman. We have a lot of talent focused on moving our brands forward.”

Asked if he plans any shifts in Lord & Taylor’s strategy, Hoffman replied: “Richard is quite clear on where he sees Lord & Taylor going. The path that Richard and the team have started seems to be very positive, but I need to get in there myself. Naturally, I am very excited. A piece of me is sad to leave Neiman Marcus where I was treated so well. Each day was like going to school. I am ready for the next challenge and the opportunity to get back into a multichannel environment.”

Hoffman noted he met his wife at Lord & Taylor, who was also a buyer there, so he has a particular fondness for the store. Returning to Lord & Taylor “ties a nice ribbon” around his life and career.

“Lord & Taylor has shown a lot of progress over the last few years. Maybe it’s time for some fresh eyes to come and help speed up the growth,” Hoffman said.

He said he is looking forward to interacting with Lord & Taylor employees. “The best place to find out the real story is in the trenches, walking the stores, speaking to buyers, the sales support staff, just the general population. I want to meet them as quickly as possible.”

Market reaction to the change in command was strong, however.

“I’m shocked, because Jane was a modern fixture,” said Bud Konheim, ceo of Nicole Miller. “It looked to me that Jane and her team were being very aggressive. They were the first to be selling a $95 tie from us when the whole floor was selling $35 ties. It looked like things were happening.” Konheim said there have been no issues getting paid for orders. “They’re as good as gold.”

Gilbert Harrison, chairman of Financo and a strategic adviser to NRDC, said, “I have a tremendous amount of respect for Jane Elfers. But when you have an opportunity to bring into your organization someone of the caliber of Brendan, if you don’t act on that you are derelict. He has a huge amount of e-commerce experience and today NRDC does very little volume” in this area.

One retail source laid out the challenge for Hoffman, stating, “Jane did a great job in a tough turnaround situation. It’s a tough concept. What’s the position in the marketplace? You can’t take Lord & Taylor down [in price] because it can’t compete against Macy’s and can Lord & Taylor bring in the contemporary that Bloomingdale’s has? That’s not easy.”