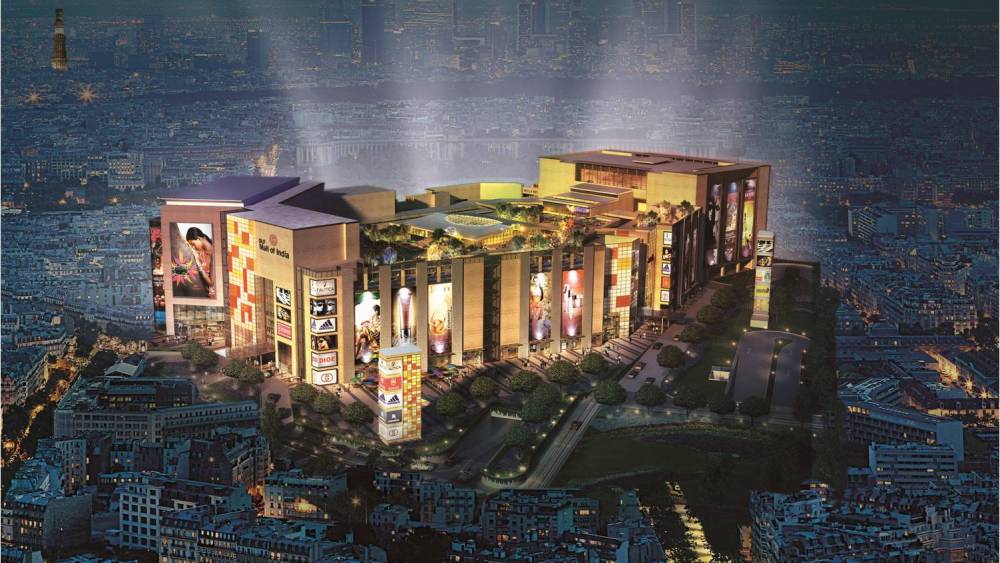 NEW DELHI — Two giant new malls opening in Kolkata, in eastern India, and in Noida in the New Delhi area are expected to reshape the playing field for brands in India.

Acropolis, in Kolkata, opened with 300,000 square feet of retail space available for 90 stores and department store chain Shoppers Stop as the anchor. Although the mall was inaugurated at the end of September, new stores are being unveiled every week, and will continue to do so over coming months. As Sushil Mohta, managing director of the Merlin Group, pointed out, retail in Kolkata caters not only to residents but also tourists — many of whom come from neighboring countries like Bangladesh, and the rest of Asia. “It is also in a great catchment area for retail,” he said.

The mall is a public-private enterprise, owned by the Kolkata Metropolitan Development Authority and real estate company Merlin.

The other mall is expected to be the biggest in India, at 1.8 million square feet, and is expected to open in mid-November in Noida, across the Yamuna river from New Delhi. Operated by property company DLF Ltd., Mall of India is not to be confused with the Great India Mall, which is an older property in the vicinity, and already a mainstay for shoppers in Noida.

Pushpa Bector, senior vice president and head of Mall of India, explained that this will be the first mall in the country with proper zoning for stores; global brands will be on one level, while Indian brands will be on another. H&M is expected to open there with a larger store, she said, and department store chain Lifestyle will be an anchor tenant. The anchor tenants have a nine-year lease, while others have a six-year lease, she said.

“The area in the mall is 93 percent leased and good to go, with food court and cinema and 200 brands,” Bector said. “The retail areas will be open in a phased manner, as can be expected in a mall this size.”

DLF has had a successful run with malls, notably with the DLF Promenade mall in the Vasant Kunj area and in Saket, in South Delhi. The group also operates Emporio, in New Delhi, which is India’s only luxury mall.

Overall, retailers say they are both relieved and pleased that more malls are being built with a little more vision and understanding of some of the lessons of the past decade. Organized retail has exploded in India in the last 10 years, and is now estimated to represent about 8 percent of the $600 billion retail industry.

In the past, retail rents were extremely high in India, along with high taxes and tariffs, making it difficult for retailers to grow, especially global brands that must negotiate customs duties and transport costs as well.

In 2015, a host of new brands have launched in India, including Juicy Couture, The Children’s Place, Gap Inc. and H&M. Aéropostale, Massimo Dutti and Uniqlo are expected to open in India soon. With others such as Zara, Mango, Vero Moda, Only, and Jack & Jones expanding, too, the competition for retail space is expected to increase.

Rents have dropped over the last two years and many brands have been trying to renegotiate their leases. A report by industry body The Associated Chambers of Commerce of India, or ASSOCHAM, last month noted that mall rents were down by 30 percent and vacancies up by 25 percent in India. The report noted that sales in shopping malls have dipped by 25 percent to 30 percent and footfall by 15 percent to 20 percent compared to the same period last year.

It added that over the next 15 years, more than 45 percent of malls in India would be converted into nonretail space, replaced with movie theaters, restaurants and discount retailers as e-commerce continues to grow and the challenges of suburban sprawl, worsening car traffic, rising fuel prices and the increased difficulty of time management in modern families made planned activities harder.

The improvement in infrastructure such as logistics, broadband and Internet-ready devices is likely further fuel e-commerce, the study said. The report estimated that around 65 million consumers in India will buy online in 2015, as against around 40 million in 2014.

Despite the report, retailers remain optimistic and the closing of malls is related more to maturity and the evolving needs of the market than declining demand. Industry analysts and retailers said the reason malls were closing was because of haphazard growth over the years, with a lack of vision and industry knowledge as malls were first opened. There were 50 operational malls in 2005, a number that rose to 610 in 2015 in the top 10 cities.

In the past, many mall owners sold rather than leased their spaces, so that they lost control of the brands in the malls, as well as lost the ability to plan their adjacencies. Many were located in areas that were unable to draw traffic. The long delays in construction also resulted in retailers, especially international ones, losing patience with the market.

Although the Mall of India in Noida opens much later than scheduled, Bector said the Delhi and the National Capital Region, which includes Gurgaon and Noida, has always had strong retail growth. Asked about falling sales in malls in the region, she said there’s “been a dip, but no dent.”

“Going to the malls is an activity that people enjoy. We have to tweak the model and get it right, get fresher brands. There’s been a lot of learning over the last decade,” she said.

Mohta of Merlin agreed. He said although e-commerce might grow in certain sectors, such as electronics, it cannot replace the family outings that are key in India and the clean environment that malls provide, a draw for apparel and fashion. “Brick-and-mortar retail and malls are going to go strong for a long time in India, certainly for the next 10 years I don’t see them being threatened. The Indian psyche hasn’t changed that much,” he said.