The Ritz Paris is surrounded by some of the most exclusive boutiques in the world, but also provides plenty of shopping opportunities should guests choose to remain within its gilded walls. 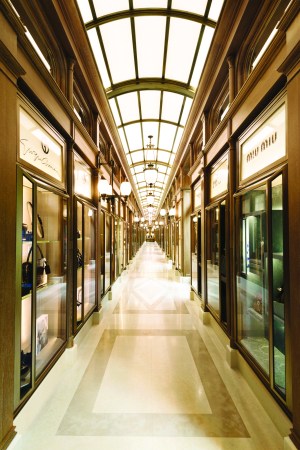 The Ritz Paris is surrounded by some of the most exclusive boutiques in the world, but also provides plenty of shopping opportunities should guests choose to remain within its gilded walls.

It has preserved the 120-yard covered passageway linking Place Vendôme and Rue Cambon formerly known as Galerie des Tentations (said to have been conceived by founder César Ritz as a playground for his wife, Marie-Louise.) There are 95 display cases featuring designer ready-to-wear, haute couture, jewelry and watches, accessories, home goods and Ritz Paris products. The gallery houses five exclusive in-store shops that look onto the hotel’s new jardin à la française, and culminates with the Ritz Paris Concept Store.

Ritz Paris Concept Store
Designed as a cabinet of curiosities devoted to travel, the concept store features an Assouline library, a cigar humidor and a rotating selection of accessories including exclusive tote bags from Maison Sellier, clutches from Alexis Mabille and Lorenz Bäumer rings.

The Ritz will invite a guest editor every six months to curate an ultimate suitcase. The first is Laure Hériard-Dubreuil, founder and chief executive officer of The Webster. She has tapped brands to create exclusive products in the spirit of her boutiques in Miami and Houston. Maison Michel contributed a pink bellboy hat, Mark Cross designed a pink passport cover and Olympia Le Tan came up with a clutch embroidered with the cover of Ernest Hemingway’s “A Moveable Feast” — a nod to the writer who spent so much time at The Ritz that the hotel named a bar after him.

The concept store also offers a selection of Ritz Paris products, including an exclusive Monopoly set and Charles of the Ritz fragrance for men. The branded line will eventually be sold in a dedicated store, set to open on Place Vendôme this fall.

Tasaki
The Japanese pearl specialist has designed an exclusive high-jewelry collection for the hotel under the label Ritz Paris par Tasaki. The inaugural line consists of five sets of one-of-a-kind pieces.

One of them, named simply Ritz Paris, puts the accent on diamonds with designs inspired by antique chandeliers, including a necklace featuring a 5.58-carat D flawless center stone. The Quintessence of Ritz Paris set, meanwhile, combines a yellow gold or white gold twisted strand motif with baroque South Sea pearls.

Alexandre Reza
Place Vendôme jeweler Alexandre Reza has opened its first store since Olivier Reza in 2008 took over the house founded by his father.

While Reza will continue to show one-of-a-kind pieces at its private salon on Place Vendôme, the Ritz shop is designed to introduce the brand to new customers with more accessible lines, including a new bridal collection.

The selection includes seasonal updates on its Farandole hoops in a variety of colored stones.

Maison Ullens
Founded by Belgian businesswoman Myriam Ullens to provide luxurious outfits for women on the go, Maison Ullens offers travel-friendly clothes and accessories, with a focus on cashmere and leather. Its bags are made in France, with ready-to-wear produced in Italy.

The Ritz Paris in-store shop is the third store for the brand, which also has stand-alone boutiques in the French capital’s Golden Triangle and in Aspen, Colo.

Colombo Via Della Spiga
The Italian brand specializes in exotic leather goods, billing itself as an example of “hidden luxury.” The Ritz store, its first in France, offers handbags including its signature Wall Street style, made from crocodile skin polished with agate stone.

Heroes
Having launched for fall 2015, luxury footwear brand Heroes is inaugurating its first store worldwide at the Ritz. Designed and made in Italy, the shoes feature details such as laser cutting on the soles of women’s high heels, and sequins or embroidery on men’s brogues.