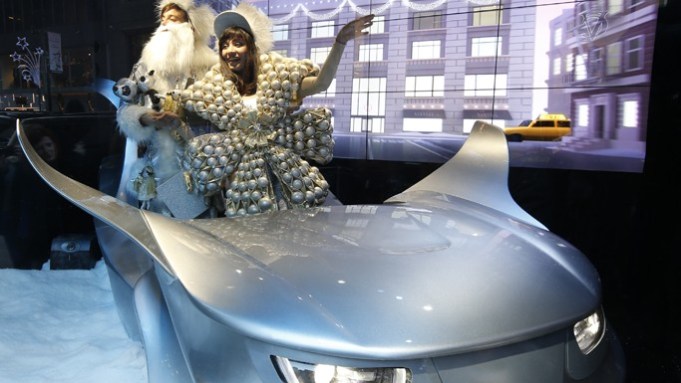 Wishing everyone a very postmodern holiday, Barneys created a futuristic vision of Manhattan. In another window there’s a fantastical ride through New York. Shoppers can take part by entering the actual window and “riding” the BNY NYC Santa’s sleigh, which looks something like a Batmobile or stingray. Barneys collaborated with an international group of artists, but Dennis Freedman, creative director of Barneys, said, “We never considered this art. We’re entertaining the public.”

At Saks Fifth Avenue, whose windows make their debut on Monday, a character called the Yeti is busily engaged in manufacturing snowflakes. Igloos and white fake fur are the hallmarks of the installation, which is based on “The Yeti Story” by Stefan Bucher. The tale is told in six windows that use 3-D video projection to follow the creature’s travels from Siberia to his current home, which is rumored to be the roof of Saks. At one window, people can make snowflakes using their mobile devices. The snowflakes can be digitally “thrown” into the window.

Bloomingdale’s wanted its windows to tie back to its tag line, “Like no other store in the world,” emphasis on the word “world.” Large gift boxes in the Lexington Avenue windows rotate to reveal scenes from different countries, including Great Britain, Italy, France, China — and New York. “We worked with different artists to bejewel and animate [the scenes],” said Jack Hruska, executive vice president of creative services. “Last year, the windows were more interactive — we captured people’s expressions looking at the windows and posted them on Facebook. This year, they’re more whimsical and magical.”

There are still bastions of traditionalism, though. Lord & Taylor’s sophisticated windows have figures dressed in Twenties- to Forties-era styles, white peacocks, white pups and a focus on product like never before. That’s because the windows depict a store of yore with shoppers carrying packages tied with red ribbons.