A listing of highlights at stores around New York City. 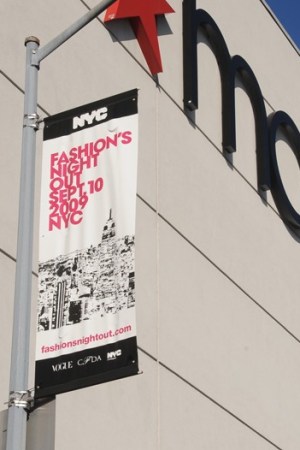 Here, a listing of highlights at stores around New York City.

Macy’s: Eight stores across the five boroughs will participate, with the Queens Center unit at 5 p.m. the official kickoff with a performance by “Hair” cast members. Macy’s chairman, president and chief executive Terry Lundgren, Michael Kors, a few surprise celebrities and Vogue editor in chief Anna Wintour will be at a Vogue pop-up trend shop. Wintour and Kors will sign the official Fashion’s Night Out T-shirt for the first 50 customers.

Macy’s Herald Square will feature Tommy Hilfiger, Rachel Roy debuting her fusion line, jazz by the Michael Fredo Jazz Trio and Kors launching his latest fragrance, Very Hollywood Michael Kors. The 34th Street windows will have a satellite exhibit of the Crossing the Line art festival by the French Institute Alliance Française. Reality TV star Jill Zarin will cap the night off with a shoe shopping party, and cosmetics counters, fragrance bars and other departments will have perks.

“We have some new ideas up our sleeve,” said Lundgren. “We never had Anna Wintour do a personal appearance. She’ll be kicking off the event at our Queens Center store. We want to make sure we’re supporting our other stores in the five boroughs. Queens is a perfect target. It’s a fantastic suburban store. Anna and her assistants will be helping shoppers pull outfits together. It’s all about affordable fashion in our stores and wearing it the way someone of Anna’s taste and style would approve and appreciate. But there’s also plenty happening at Herald Square. I don’t think everyone fully understands it will be very difficult for the U.S. economy to recover until consumers start consuming again. Any ideas that we have to encourage appropriate spending have potential to be very good for the economy. Our mission is to make people feel like it’s OK to buy fashion again and do so appropriately within your budget.”

What’s in store at Bergdorf Goodman>>

With all that’s going on at the store for FNO, “It is an expense, but we believe in it and support it to our fullest ability,” said Jim Gold, president and chief executive officer. “Hopefully there will be a short-term impact but more importantly it has a longer-term impact and brings the fun back to fashion retailing. You can lay down and do nothing or beat the drum and create excitement and come up with fresh new big ideas, and that’s what this is all about.”

What’s in store at Saks>>

“I am curious how will the consumer will respond,” said Stephen I. Sadove, chairman and ceo. “I don’t know that it’s about purchasing. I am not looking at this as generating ‘x’ amount of sales. I don’t see it as a one-night thing. I am much more excited about getting people in the store, about the longer-term effect, and setting a positive buzz about fashion. This is a celebration of fashion, not an off-price shopping event.”

What’s in store at Bloomingdale’s on 59th St.>>

Bloomingdale’s 59th Street: Recording artist Howie Day performs at 6 p.m. on the second floor. Free 40 Carrots yogurt will be served on seven with any purchase between 6 and 10 p.m. There will be informal modeling of Milly fashions and cocktails while designer Michelle Smith autographs a tote designed exclusively for Clinique. On the designer fourth floor, there will be gifts with purchase, informal modeling, sweepstakes and stylists from several designer brands. Designer appearances include Rebecca Minkoff in handbags, Kimberley Newport of Pink Tartan; Elie Tahari; Ronny Kobo, and Adam Derrick from To Boot. Beauty bloggers and treats from Payard will be available, and Darcy Miller, editorial director of Martha Stewart Weddings, will interview designer Monique Lhuillier.

What’s in store at Lord & Taylor>>

Lord & Taylor: There will be a Patrick McMullan photo exhibit, Vogue editor Lauren Santo Domingo hosting “Front Row at the Shows,” where she shares style tips as McMullan shoots the scene; a performance by the cast of “Girls Night: The Musical”; Mandi Norwood signing copies of “Michelle Style,” and hunks from the 2010 NYC Firefighters Calendar signing their calendar. Keys will be distributed for lock boxes that could contain prizes such as VH1 Save the Music Diva concert tickets, New York Fashion Week tickets, shopping sprees and a wardrobe from BCBGeneration. There will also be a Wacoal bra fitting, among other happenings.

Return to beginning of article>>