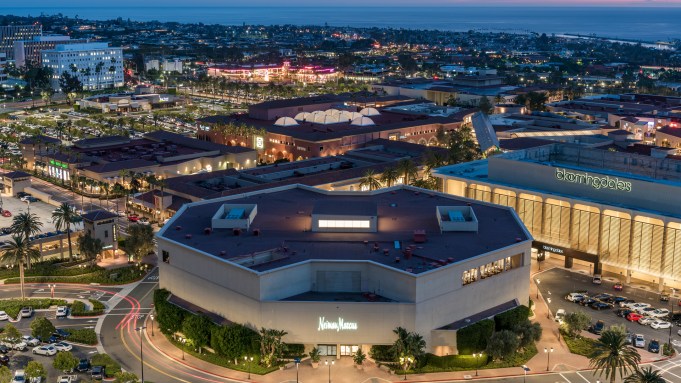 The center, like that of neighboring South Coast Plaza, turns 50 this year with a raft of promotions planned at retail in the lead-up to and even following its birthday on Sept. 9. The first of those events kicks off Saturday with the home- and design-themed Paseo Party, which will include in-store entertainment and parties at The Horchow Shop in Neiman Marcus, Bloomingdale’s Home Store and Anthropologie, among others.

Fashion Island enlisted a number of its retailers and restaurants to participate in a 50 Days of Fashion promotion that includes exclusive deals running from July 29 through Sept. 16. The development also teamed with Trina Turk on an anniversary beach towel, which will be part of a gift with purchase for shoppers spending at least $550 at the center.

The executive said what largely started out as just another mall — with 52 stores and anchors in Buffums, The Broadway, Robinson’s and J.C. Penney — has evolved into a flagship retail property for the county totaling more than 150 stores and restaurants across 1.5 million square feet.

Like other retail center operators looking to remain competitive in the market today, Fashion Island has focused on exclusives or first-to-market retailers, laying claim to plenty of firsts: an Orange County Bonobos; brick-and-mortar store for Urban Decay; a flagship Anthropologie; a West Coast Ray-Ban; a Lincoln Experience Center, and a U.S. Rodd & Gunn.

“We take pride in not just curation but incubation,” Moore said.

The leasing team is in talks with a luxury theater operator and recently launched a delivery service and mobile concierge for customers. The company earlier in the year also tested SoftBank’s robot Pepper, which Westfield tested at a couple Northern California malls late last year.

“Technology for us, as a company, we try to be as forward-thinking as the next shopping center owner and developer,” said Irvine Co. Retail Properties chief marketing officer Easther Liu. “We test a lot….Our big mantra around it is convenience.”

Technology and tenant exclusives have helped the center solidify its position in what is a changing marketplace.

“Clearly, the fundamentals of the A and above properties are not experiencing what the B and C malls are,” Moore said. “That said, we’re clearly caught up in the swirling headwinds of the department store industry. We’re very lucky in that we have not been, in this recent cycle, affected by that.”

Instead, Moore reported steady increases in rental rates, occupancy in the high-90 percentile and healthy interest in leasing at Fashion Island. He also said the center is pivoting to place more successful tenants in larger footprints.

“I don’t want to say that Fashion Island is recession proof or immune to what’s going on, but it sure is resistant,” Moore said.

Snap Links With Caruso to Bring Snapbot Back to the Grove