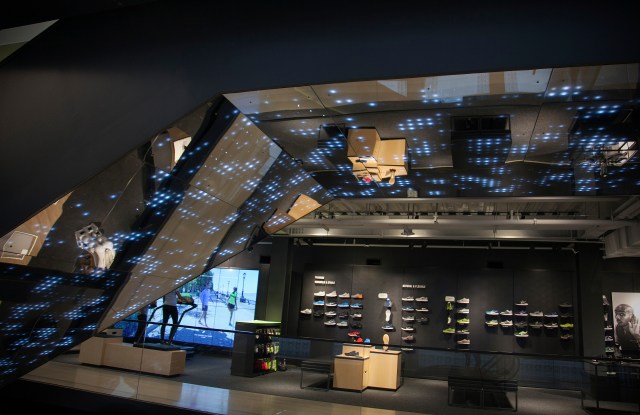 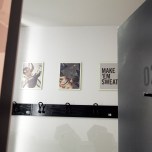 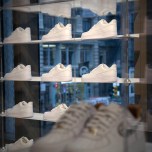 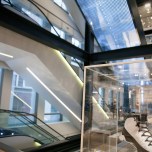 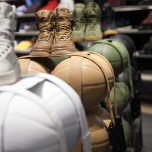 NEW YORK — The new Nike store in SoHo is hard to miss. In retail speak, the company has expanded its footprint in New York, staking a mighty claim in SoHo at 529 Broadway on the corner of Spring Street, where it took over a five-story, 55,000-square-foot space that was originally the Prescott House Hotel, built in 1853. It opens to the public on Friday.

A multisport emporium with spaces devoted to running, basketball and soccer, Nike SoHo represents what the company is calling “the Future of Sport Retail” to which active experience, or the ability to test-drive products in the store, and customer service are the top priorities. To that end, upon entering, the customer’s first interaction is not supposed to be with product, but a personal greeting from an employee who can direct him or her to their desired shopping area and inform them of special events and features available in the store.

For example, the last pair of Nike Mags, the self-lacing sneaker featured in “Back to the Future Part II” is being displayed on the first floor through Saturday, when it will be auctioned off to benefit the Michael J. Fox Foundation. Also on the first floor is the women’s sportswear area, featuring a lounge where customers can have one-on-one personal styling appointments.

The fitting rooms are designed to be big enough to accommodate Nike’s core movements (lunging, squatting) and have different lighting options. Additionally, the first floor is outfitted with Nike+ Service Stations, where members of Nike+ digital services can set up personal appointments, place orders, access their profile, etc.

On the second floor is a Nike by NYC: Personalization Studio, where shoppers can have on-the-spot customization treatments through various Nike ID options. To start, work by three local artists — Grotesk, Phil Annand and Jason Polan — is available to customize Air Force 1s and T-shirts, with artists rotating on a two-week basis.

There’s also the “Trial Zones.” (Nike has its own internal language: sales associates are “athletes,” managers are “coaches,” its network of stores is its “fleet,” kids are “young athletes.”) On the third floor is the Nike+ Running Trial Zone, a treadmill positioned in front of large-scale video screens that project running scenes through Central Park or Battery Park and load a runner’s personal info through the Nike+ member profile.

Nike running athletes — sales clerks who work in the running department — can give customers sneakers to run in on the treadmill where the runner’s gait is filmed, uploaded to an iPad and assessed for fit, comfort, pronation, etc.

On the fourth floor, there’s the Nike+ Soccer Trial Zone, a 400-square-foot turf area enclosed in glass walls where people can test cleats. On the fifth floor, within the store’s world of Jordan, there’s the Nike+ Basketball Trial Zone, featuring a 700-square-foot half-court basketball court with a real hoop and 23-foot ceilings — 23 is a very important number in Nike’s world, being both LeBron James’ and Michael Jordan’s jersey number. The ceiling height was customized with that in mind.

There are versions of these trial zones, particularly Nike Running, now in its third iteration, in other Nike stores but not executed at this level. “We do look at the store as our global debut of the Future of Sport Retail,” said Heidi O’Neill, Nike’s president of global direct to consumer. “But it’s been informed by everything we’ve done in the past.”

As a public company and one with a very brand-specific culture, it’s difficult to get concrete answers out of publicity-approved employees, no matter how high up the food chain. Asked if the positioning of women’s merchandise on the first floor indicated that the women’s business was expected to be the store’s top performer, O’Neill said it is a growth category and, “The women’s consumer is really important to us and we wanted her to feel welcomed into the store from the moment she walks in.”

Asked how long Nike had been scouting locations in SoHo and what the traffic expectations were, O’Neill said the company is always scouting for locations. She didn’t have specific traffic numbers but “is superconfident in the neighborhood and profile of the consumer.”

What about the store’s “athletes?” How big is the staff and how well trained? As for the former, Nike doesn’t disclose numbers, but O’Neill said for the SoHo store, they’ve enlisted a new “expert team” that is “certified” by Nike internal standards. Details were few but some of them had been flown out to Nike’s Beaverton, Ore., headquarters.

Timed to the SoHo store opening is a new campaign titled NY Made, promoting Nike and New York with an outdoor and digital marketing campaign featuring Odell Beckham Jr., Victor Cruz, Serena Williams, Nas and Bella Hadid. There will also be live events throughout New York, including appearances by Serena Williams and designer John Elliott at Nike SoHo and Victor Cruz at the Kith x Nike pop-up store. The NikeLab Gyakusou collection and “What the Kyrie” collections will launch, as well as a collaboration with Elliott.

On the subject of timing — Nike held an event featuring athletes and VIPs at the store on Thursday, the day after the presidential election. O’Neill said, “We believe that sport is an amazing experience and we wanted to bring some of this world the world and be here in time for the holidays. We’re focused on the consumer and not outside activity.”