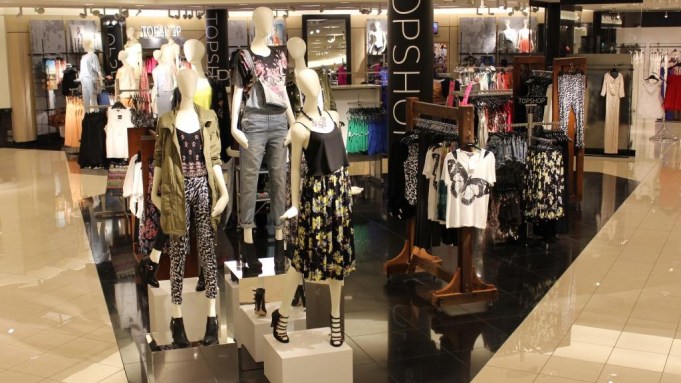 Nordstrom Inc. is ready to blow out its Topshop partnership — and it could prove to be the model for other brand deals.

Originally, Nordstrom was discreet, cautiously taking the trendy Topshop and Topman to smaller markets amid concerns it would be out of sync with the understated Nordstrom ambience. But in an exclusive interview last week, Pete Nordstrom, president of merchandising, discussed the partnership in depth for the first time since the deal was unveiled in July 2012, and disclosed that the Seattle-based upscale department store will be showcasing Topshop and Topman in more of its larger, urban locations.

He said 28 Topshop women’s departments and eight Topman men’s departments will be added across the country starting in late September, bringing the total number of Nordstrom stores with Topshop and Topman to 42 and 18, respectively, and that “a completely refreshed design” for the British brand’s in-store departments, and a national social media campaign, are on the agenda.

“It’s definitely working,” Nordstrom told WWD. “We can literally measure that Topshop is attracting a lot of new customers. The average age is significantly younger — like 10 years younger than the typical Nordstrom’s women’s apparel customer.” He characterized Topshop as “a really big catalyst to Nordstrom’s fashion authority” and a “big part” of the company’s strategic initiative to attract younger fashion customers.

He also said Topshop has had a spillover effect. “It helps the beauty business, the shoe business and the accessory business. It’s also happening online. The traffic we get on Topshop is right up at the very top. We can measure which brands get the most traffic.”

The $12 billion Nordstrom Inc., which operates 117 full-price stores and 127 Nordstrom Rack outlets, wants to be identified with younger, hipper fashion and distance itself from a perception of being too traditional and not trendy enough. Nordstrom long struggled with its women’s business, though the business took a turn for the better in the fourth quarter of 2012, in part due to Topshop. Nordstrom also remerchandised its Savvy areas, which Topshop sits next to, and some brands, such as Joie and Marc by Marc Jacobs, were relocated to other parts of the women’s floor. In addition, Nordstrom enhanced its Fashion Rewards program to simplify and juice up the benefits.

When the partnership with Topshop was revealed a year ago, “in every article that we read, it was always the fashionable trendy Topshop partnering with the conservative Nordstrom,” said Nordstrom, candidly. “That’s our reputation — we have to own that, but we want to be relevant, current and modern. We’ve got to do things to keep us on the forefront.”

Asked if his company has any other similar, exclusive brand deals pending, Nordstrom said, “Not yet,” though that doesn’t mean it couldn’t happen in the future, he added. “The bar is high. It’s got to be something supercompelling, a kind of a unique idea. We have other [brands] that are interested,” and want to be showcased, he added. “We are willing to listen but we will be extremely selective.”

One possibility is with Miss Selfridge, which like Topshop, is part of the portfolio of brands owned by Britain’s Arcadia Group. “There are no current plans to sell Miss Selfridge,” said a Nordstrom spokeswoman.

Arcadia was said to be in talks with Nordstrom, as well as Macy’s Inc., regarding selling Miss Selfridge to those stores. Sources have said either retailer could start selling the label soon, possibly via shops-in-shop. Nordstrom would have an edge over Macy’s in any talks, considering it already sells Topshop. Nordstrom also sells Evans, a plus-size collection owned by Arcadia. The distribution on Evans is widening slightly to nine Nordstrom doors, from six initially.

Arcadia’s interest in broadening its U.S. distribution is no secret. In June, the company staged its first U.S. “group preview” of its Miss Selfridge, Evans, Dorothy Perkins and Wallis brands at the Bryant Park Hotel in Manhattan. Last December, when Sir Philip Green, the owner of Arcadia, sold a 25 percent stake in Topshop and Topman to Leonard Green & Partners, he said he aims to generate $1 billion in revenues from Topshop and Topman in the U.S. in “the medium term” and double the brands’ worldwide sales over the next three to four years. The deal valued Topshop and Topman at more than $3 billion.

Nordstrom continues to be in a learning phase with Topshop. Asked about the lessons learned so far, Nordstrom replied, “A lot of it is just simple logistics of getting the product here. Topshop is not really set up as a wholesaler. We had to do some interesting manual work-arounds. Actually, doing it is complicated. They have got quite a breadth of styles and we’re not giving them 15,000 feet. We’ve got to edit to something that will work best and allow them to show off. We found that when they can really display their newest fashion-forward ideas, that resonates really well, much better than core basics. We had to be super humble, and say to them, ‘What do you think?’ rather than pigeonhole. They are good, talented merchants. We have learned a lot.

“We do edit [the collection] but they are largely involved in the selection and then there are all the issues of allocation and sizes and quantities. It’s a very collaborative buying situation, maybe more so than anything else we do.”

After introducing Topman, Nordstrom quickly discovered suiting was a classification that could sell in a greater number of stores so the distribution is being expanded. Dresses has been strong category, too, and there has been “strong growth” in knitwear. Nordstrom carries Topshop and Topman products in 1,150- to 2,500-square-foot settings. Hudson’s Bay in Canada has the Topshop exclusive in that country, and really blows out the brand in settings that range anywhere from 7,000 to 40,000 square feet per door. Nordstrom said he visited Topshop at Hudson’s Bay stores in Vancouver and Calgary. “They’ve got the ability to give them more space because they have more space,” and he acknowledged HB’s presentation is impressive due to the scale.

Asked if Nordstrom could also sell Topshop at its upcoming stores in Canada, Nordstrom said, “At this point, no. It’s not going to be part of our Canadian offer at this point.” Nordstrom’s first store in Canada will open in fall 2014 in Chinook Centre in Calgary. Eight to 10 are planned including openings in Ottawa’s Rideau Centre and Vancouver’s Pacific Centre in 2015, followed by Toronto launches in 2016 at Sherway Gardens and Yorkdale Shopping Centre.

Asked what the refreshed Topshop format is like, Nordstrom replied, “It is just improving it. They obviously have the desire to have the full-blown brand. We are trying to find the middle ground. We are using a lot of their imagery. They have big photos. We will try some of them. They have really impressive merchandising techniques. They are really good at walls, probably better at walls then we are….We are definitely going for it,” and spending more.

In some stores where Nordstrom does not have a Topshop space, the brand’s suits are sold. Nordstrom also sells Topshop shoes and beauty products separate from its Topshops, in the BP shoe department and the beauty departments. Sometimes, Nordstrom “double exposes” Topshop products, in the shops-in-shop and in other areas.

“The beauty of having 117 stores is that we can test” different products and shop configurations. “The fact that these [shops] are not walled-in means it fits really comfortably against our new Savvy departments,” which Nordstrom said share a similar customer profile and similar style aesthetics. “Just the whole vibe of what’s happening is complementary.”

Nordstrom is the only U.S. retailer to sell the British fashion brands’ merchandise in-store and online, though Topshop and Topman have stores in New York, Chicago, Las Vegas and Los Angeles, and their own U.S.-designated Web sites.

Topshop and Topman merchandise will be available in key markets such as Dallas, Houston, Minneapolis, San Diego, Washington D.C., Southern and Northern California, South Florida, as well as new downtown locations in Chicago and Seattle.

Topman locations at Nordstrom include Ala Moana; The Americana at Brand; Dadeland Mall in Miami; Garden State Plaza and Phipps Plaza, among others.

“The first nine months have been a steep learning curve for us all, and it has been great to work with Pete and his team,” said Green. “I am [pleased] about this next phase of the partnership between Nordstrom and Topshop and Topman. I always believed that Nordstrom’s multichannel presence was the decisive factor in partnering with them in the USA.”