The upcoming Manhattan flagship, a better holiday gift assortment and the Anniversary Sale should help turn the tide on business.

A rendering of Nordstrom's women's flagship on 57th Street.

Nordstrom isn’t making any excuses for its weak first-quarter showing and promises new tactics to “change the fortunes.”

“We’ve gotten off to a difficult start. The big news is there is big, big part of the year left and we have some exciting things ahead,” said Pete Nordstrom, copresident of $16 billion Nordstrom Inc., addressing shareholders at the annual meeting Thursday in Seattle.

“There are events that can change our fortunes,” Nordstrom said, citing the impending opening of the New York City women’s flagship; the Anniversary Sale in the summer which offers new fashion arrivals at discounts for a temporary period, and efforts to sell more gifts in the fourth quarter.

It’s been a particularly tough time for Nordstrom Inc. with the family suffering the sudden passing of Blake Nordstrom in January, and a disappointing first quarter. Net earnings fell to $37 million versus $87 million in the year-ago period and sales fell 3.5 percent. Women’s apparel and beauty were the most challenged areas and the company has lowered guidance for the year, projecting sales down 2 percent to flat compared to previous guidance of up 1 to 2 percent, and earnings per share at $3.25 to $3.65 versus $3.65 to $3.90.

“We’ve got to keep slugging it out,” said Pete. “Our team is battle-tested. We’ve had ups and downs.

“We feel really confident about working through this together. We will stay focused on customers. The answer for us is not to run the same plays we did 20 years ago when we had some tough times…We will not revert back to old tactics.”

With the Anniversary Sale, “There are ways we can execute it better. We’ve gone through a lot of learnings through last year’s results. We have excellent data. It’s become such a digital event. That changes how we execute it.” He sees providing “better depth” on brands, sizes and colors.

For the holiday season, “We have a much more purposeful agenda around gift-giving. A lot has do around price points that make (Nordstrom) a gift-giving destination.”

Nordstrom’s seven-level, 320,000-square-foot women’s flagship in Manhattan is set to open Oct. 24, at the base of the tallest luxury residential building in the world, at 225 West 57th Street. Nordstrom’s men’s store opened in April 2018 across Broadway from the women’s flagship. “One of the hard things we’ve done well there is hiring a bunch of great people to deliver a Nordstrom experience for customers there. It’s set the stage for what’s possible when we open the women’s tower.”

Nordstrom also plans two Nordstrom Local openings in Manhattan this fall, on the Upper East Side and in the West Village. “There could be more,” in the city, Pete Nordstrom disclosed. “New York is a tough place to get around and people are locked into their neighborhoods.” It’s also Nordstrom’s biggest online market. Nordstrom Locals are small sites for alterations, returns, pickups and other services, but don’t sell merchandise. There are four in Los Angeles.

Nordstrom’s annual meeting got off on a solemn note, with chairman Brad Smith, noting the untimely passing of Blake. “He was an industry icon, a consummate gentleman, and a beloved family member and friend, with a passion and deep commitment to employees, customers and communities.”

Copresident Erik Nordstrom spoke next. “It’s been a tough time for the family and the company,” he acknowledged, noting that Blake “in genuine ways brought to life the values and culture” of Nordstrom.

Erik was interrupted by an anti-fur activist who got to the podium and protested that Nordstrom Inc. refuses to go fur-free. The unidentified blonde woman left quickly, and people seemed stunned, but Erik got the meeting back on track with a bit of levity. “I was not prepared for that one. I wish Blake would have taken that one.”

He said Q1 earnings “fell well below our expectations, well below our standards. We are going to own it. We are not going to say it’s external factors like the weather or the economy.” He mentioned problems executing the new Nordy Club loyalty program, a ill-planned reduction in digital marketing, and merchandise issues.

However, Nordstrom still has “great financial strength with a very strong balance sheet,” with $1 billion in annual operating cash flow for 10 consecutive years and having returned $250 million to shareholders in the last year.

During the question-and-answer segment, Pete said the fur issue is “challenging to address. We have a lot of customers who don’t want us to carry fur and a fair amount who do. We try not to get in that ethical debate. We don’t sell very much fur but try to show the best of the brands that we carry. The way customer demand goes is the way we go with the subject.”

The company’s stock price took a dive on Wednesday, and a smaller dip on Thursday to $33.93, to which Erik said, “We embrace being a public company and are looking to perform for our shareholders. But we don’t get wrapped up in the day-to-day reaction. Our focus is not about monitoring the stock price and how it’s being perceived. Our focus is how we get results. Ultimately, our results lead to an enhanced stock price.” 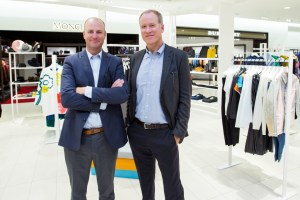