After 15 years of broken promises and thwarted ambitions, Nordstrom earlier this month unveiled a full-line store at the Ala Moana Center in Honolulu. The... 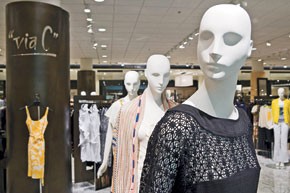 After 15 years of broken promises and thwarted ambitions, Nordstrom earlier this month unveiled a full-line store at the Ala Moana Center in Honolulu. The 210,000-square-foot unit — the retailer’s first full-line store in Hawaii — ranked in the top-five openings in the company’s history, and Nordstrom is savoring the moment.

“We had deals that kept falling apart,” said Blake Nordstrom, president of Nordstrom Inc. “Before General Growth Properties [Ala Moana’s owner] bought the mall, we talked with the previous owner, but Liberty House [a local retailer] blocked us. Then we signed a lease a few blocks away at the Victoria Ward Center. GGP bought that mall and canceled the lease. We have never had a store take this long to open.”

Nordstrom declined to discuss sales projections, but said, “Ala Moana has one of the highest sales per square foot of any mall in the country. It’s a very name-brand driven market. Part of that is Japanese tourism, which has a big impact on the mall.”

Nordstrom is no stranger to Hawaii. The retailer has had a presence on the island for many years, operating leased shoe departments in 10 Liberty House stores from 1966 to 1997. When the agreement with Liberty House ended, Nordstrom opened a freestanding shoe store at Ala Moana. A Nordstrom Rack unit bowed at Ward Center in 2000.

In spite of the state’s low 2.5 percent unemployment rate, Nordstrom said the company received 2,400 job applications for the store.

The Seattle-based Nordstrom took pains to design a store in sync with the surroundings. The contemporary-style building was inspired by Hawaiian architecture, with backlit windows that create an Asian lantern effect. Inside, columns wrapped in white coral with fossilized seashells reference the ocean. Fine art by local artists such as Don Ed Hardy, Scottie Flamm, Bruce Behnke, Curt Ginther, Carl Pao and Franco Salmoiraghi is on display.

“We customized the store, given the importance of the market and the unique location,” Nordstrom said. “It definitely has a unique feel for us.”

The store has a large designer offering, but Nordstrom would like more. “The challenge for us is distribution,” he said. “A lot of brands have their own shops, not only at Ala Moana, but in Waikiki, a mile away. We’d like to have more designer, and we think we could sell more. There’s no doubt there’s customer demand for it.”

A Lanvin shop on the third floor is only the second U.S. shop-in-shop for the French fashion house. There’s also a St. John shop, European and American designer collections, via C with labels such as 3.1 Phillip Lim, M Missoni, Milly, Moschino Cheap & Chic, Tory Burch and Vince. Savvy, t.d.b. and Individualist departments are also found on three, along with Ebar, an espresso bar.

Much of the merchandise is skewed toward locals. The Ala Moana unit has the largest petite department of any store in the chain and the largest selection of sunglasses. There are fewer suits and more trousers and an emphasis on swimwear.

A highlight of the main (second) floor is the women’s shoe area, which has 35 percent more space than Nordstrom’s average shoe departments. “The shoes are pretty spectacular,” Nordstrom said. “We have more of a reputation for shoes in Hawaii. It’s a three-room shoe department.”

Also on the second floor is an open-sell cosmetics department with a new Chanel concept, accessories and handbags. BP, young contemporary fashion, has specially designed lighting, a screen showing the latest music and fashion videos and “the apartment,” a dressing room concept with a flat-screen TV, couches and fashion magazines for teens.

Lingerie, kids’ wear, the Rail department for denim and casual sportswear, men’s and the Marketplace Cafe are on the first level.

“This is the biggest store we’ve opened in several years,” Nordstrom said. “We’ve heard that customers are excited for us to be at Ala Moana because of the niche we have between Macy’s and Neiman Marcus.”