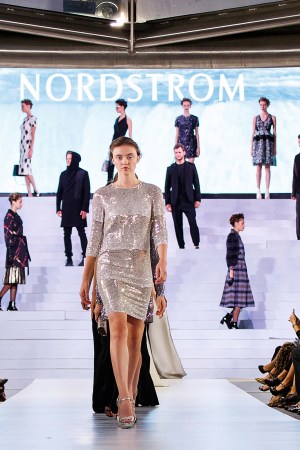 VANCOUVER — “I’d say I’ve been to 100 of these. It never gets tired,” said Bruce Nordstrom, the chairman emeritus of Nordstrom Inc., at Friday’s opening of Nordstrom here, the 119th unit in the full line department store chain.

That was just after more than 2,000 shoppers streamed into the five store entrances at 9:30 a.m., greeted by hundreds of cheering store workers, in a traditional Nordstrom style opening ceremony. Outside, the retailer put up a huge tent for one of its “beauty bashes,” which began two hours earlier and drew hundreds of women for makeovers and to buy beauty products. “It supercharges the opening,” commented Blake Nordstrom, copresident, and Bruce’s son. “We’ve been doing them for about 10 years.”

The downtown Vancouver flagship opening, in the Pacific Centre, is a big step toward Nordstrom’s goal of attaining $20 billion in annual sales by 2020.

It’s expected to be among the $13.1 billion Nordstrom’s top-five volume generators, although the company declined to provide a projection. The three-level, 230,000-square-foot flagship sports the retailer’s new store design, transforming the Nordstrom shopping experience. It also can be considered a warm up act for the upcoming flagships in Toronto’s Eaton Centre in September 2016 and on 57th Street in New York City in fall 2018, which like Vancouver will attract clientele from around the world requiring elevated offerings, services and trappings.

The timing seems right for Nordstrom to open in Vancouver, where there’s increasing wealth, tourism and development, in part spurred by the 2010 Winter Olympics hosted by the city. In addition, the city is nicknamed “Hollywood North” because of its burgeoning film industry, the Vancouver Art Gallery is relocating to much bigger premises just eight blocks away from Nordstrom in five or six years, and there’s a growing sense that upscale brands need to have a presence in the city.

“This is a really a big deal for us,” said Blake Nordstrom. “We have just been so mindful of how many U.S. retailers have had challenges crossing the border. We’ve spent a lot of time talking to lots of retailers — like Whole Foods, Costco, Williams Sonoma — about their structure, their expenses, their strengths and opportunities. You just can’t replicate what you do in the States.”

The Vancouver flagship, Nordstrom added, represents “our single best effort in terms of design and product and we think in creating a terrific team. Canadians don’t want Nordstrom Light.”

“Vancouver represents our absolute newest thinking about design and service and distribution of product,” said Pete Nordstrom, copresident, and another of Bruce’s son, along with Erik Nordstrom, the retailer’s third copresident.

Nordstrom’s handful of flagships in urban centers “are going to get a disproportionate amount of investment,” including the flagship in San Francisco, which next year begins a two-year renewal project, while the Seattle flagship is two-thirds of the way through an $80 million renewal, according to Pete Nordstrom.

The Vancouver flagship is on the site of a former Sears store, though Nordstrom left no vestiges of what was considered the city’s white elephant. The company gutted the site and has incorporated the new store design already introduced to five stores opened within the last year-and-a-half in Jacksonville, Fla.; The Woodlands in suburban Houston; Calgary; Ottawa, and Puerto Rico.

There is an open floor plan with categories and merchandise areas for different lifestyles and activities that flow easily into each other to encourage greater cross shopping, compared to the more traditional shopping experience where departments are rigidly defined. Instead of a big, wide main aisle down the center of the store to the escalators, the new format invites greater navigation through the merchandise. Landing areas just inside the entrances provide a sense of space and help shoppers get their bearings.

There is recessed LED lighting for energy efficiency and to help see the true colors of the garments, and an innovative fixturing system is suspended from the ceiling and runs on tracks so they are movable and merchandise presentations can be readily downsized or increased depending on selling trends. There is single surface floor covering — distressed oak on floor three and Italian tile on one and two — making it easier to reconfigure, while a variety of area rugs delineate brands and shops.

The designer presentation is pumped up, but there’s still a breadth of merchandise in sync with the Nordstrom appeal to a range of customers that’s wider than Saks Fifth Avenue and Neiman Marcus and distinguishes Nordstrom from Canada’s Holt Renfrew and Hudson’s Bay. For example, in shoes there are Prada and Lanvin, as well as Jessica Simpson and Sam Edelman. In sportswear, there’s a range from Stella McCartney, Celine and Saint Laurent to Madewell. Other designer and contemporary labels include Valentino, Simone Rocha, Michael Michael Kors, Ted Baker London, Alice + Olivia, Kate Spade New York, Canada Goose, Marni and Free People.

There is a large activewear area with Proenza Schuler bathing suits, Nordstrom’s private Zella label, The North Face and Nike.

Other features include tailor shops; a shoe shine station; Canada’s first Sugarfina shop; the Habitant bar, which is situated in the middle of the selling floor; the Bistro Verde restaurant and bar; a greater range of sizing because of the large Asian population in Vancouver; 24-hour customer service linked to hotel concierges in case customers lose their luggage and need emergency shopping; two-hour free delivery in the downtown area and $15 same-day delivery within 15 kilometers, and alterations “when you want it,” McKibbin said.