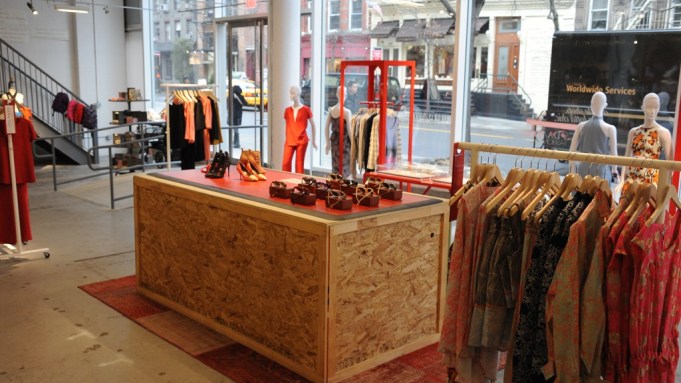 NEW YORK — Nordstrom is supporting the CFDA/Vogue Fashion Fund by opening boutiques for the 10 finalists at five flagships and Treasure & Bond, its concept store in SoHo that donates 100 percent of proceeds to charity.

Jeffrey Kalinsky, executive vice president of designer merchandising at Nordstrom and a member of the selection committee, said, “We currently carry three of the candidates, and we have definite interest in the seven that are not currently represented in stores. Emerging American designers need all the support we can give them as an industry.”

About 200 designers applied to the fashion fund this year. The committee cut the pool of entrants down to 50, then whittled it down to 10.

“Overall, our Nordstrom customer is much younger, very forward and lifestyle-driven,” said Sahar Sokhandan, designer apparel buyer at Nordstrom. “A lot of these designers have loyal followings.” The shops, which launch on Monday, are scheduled to remain in stores through May, however, “We think [the boutiques] are going to sell out rather quickly,” a spokeswoman said.

The six boutiques, including Treasure & Bond’s 400-square-foot shop-in-shop, are being supported by a full-page ad in Nordstrom’s upcoming catalogue, targeted e-mails, an informational page on Nordstrom’s Web site and blog coverage on Nordstrom’s The Thread at blogs.norstrom.com. Nordstrom has been supporting the CFDA for seven years.

Asked whether Nordstrom has plans to roll out Treasure & Bond, the spokeswoman said, “We’re really focused on this store at this time. We’re learning a lot about the New York customer and a lot about doing business in New York,” a reference to one of the reasons Treasure & Bond was launched — to become familiar with the city prior to opening a full-line store. Nordstrom signed a lease last year to open in 2018 a 280,000-square-foot flagship on West 57th Street, between Broadway and Seventh Avenue south of Central Park. Meanwhile, Treasure & Bond is working on launching e-commerce.