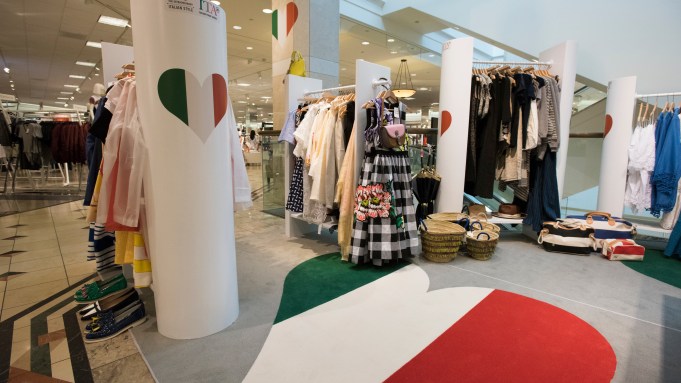 DALLAS — Nordstrom is having a love affair with Italy in Texas, where four stores opened pop-up shops this week to showcase 55 emerging Italian brands.

Edited by Olivia Kim, vice president of special projects, Pop-In@Nordstrom Loves Italy boutiques will run through April 17 inside Nordstrom at Galleria Dallas, The Galleria in Houston, Barton Creek Square in Austin and The Shops at La Cantera in San Antonio.

“The selection is amazing because you have everything from shoes to clothes to bags to things for the hair,” said Bianca Brandolini d’Adda, who served as an ambassador for the Italian Trade Agency on Thursday at a celebratory cocktail party at the Rosewood Mansion on Turtle Creek. “I discovered the [Pasotti] umbrella brand, which is fantastic, incredible, and [Exkite], who is making jackets with skydiving fabric.”

Nordstrom’s “We Love Italy” campaign launched last fall in all eight of the retailer’s Texas stores to promote Italian merchandise in general.

The Italian Trade Agency sparked the promotion, focusing on Texas because it’s a big market that has less representation of Italian merchandise than the East and West Coasts, explained Maurizio Forte, trade commissioner and U.S. executive director. The partnership is supported by Italy’s Ministry of Economic Development.

“We want to introduce new brands,” Forte said. “A couple of years ago the government realized that the place we really have to invest our money to support made in Italy is definitely in the U.S. The U.S. market is growing, especially compared with other markets that are quite flat in the last few years.”

The trade group contacted Nordstrom, which offered an ideal platform via Kim’s pop-in shops, he explained. Kim supplied a product wish list that they distributed to Italy’s manufacturing community, and she whittled 700 applications to 55 resources. The shops offer clothing and accessories for men, women and kids in a broad price range, with most items retailing between $100 and $1,000.

Kim has assembled 23 Pop-In@Nordstrom shops since 2013. She was unable to attend the party for personal reasons.

“We have met so many incredibly talented designers from all over Italy who all have amazing stories to tell about their companies,” she said. “We really just wanted see what was out there and be sure we could offer the range of Italian fashion, and it’s exciting to give these brands a platform to be exposed in the U.S. for the first time.”

Giolielli Dop’s $52 red cord bracelets dangling a sterling and enamel charm of a chili pepper or another food made the cut.

Company co-owner Giorgio Isabella, a fourth-generation jeweler, said the brand only launched last May. “We started selling online and to independent jewelry stores in Italy, and we are opening our first Italian department store this month in Rome — Coin.”

Brandolini d’Adda had a few complaints about her Dallas experience: “I wanted to see a lot of big hair and crazy makeup, and — zero,” she said. “And no cowboys. I wanted to see cowboys.”