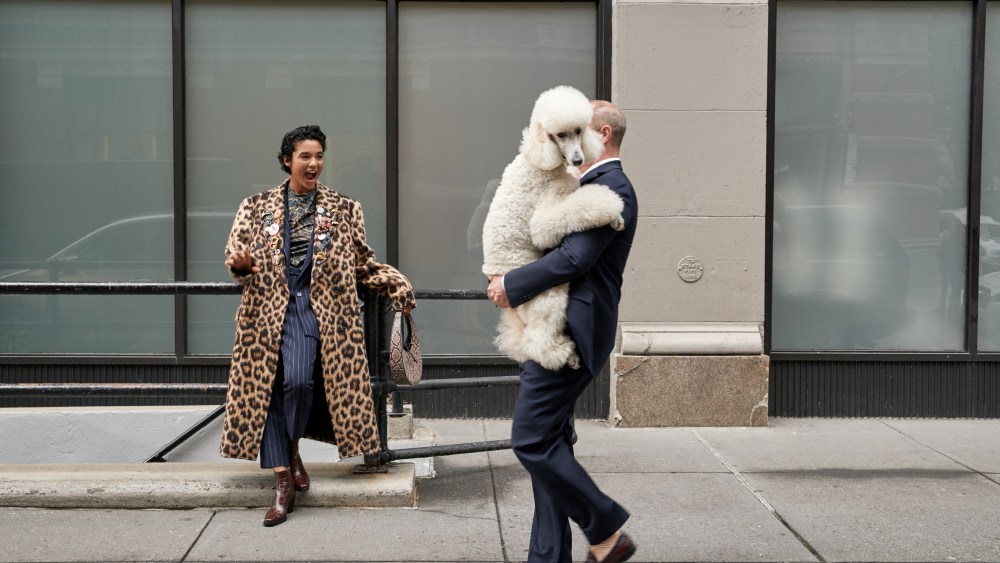 Seattle-based Nordstrom Inc. is getting into a New York state of mind, as the opening of its Manhattan flagship nears.

On Aug. 3, Nordstrom will break a fall ad campaign depicting New York City street scenes and a spectrum of fashion, and calling out its soon-to-open seven-level, 320,000-square-foot women’s flagship. The store is scheduled to open Oct. 24 on the northeast corner of Broadway and 57th Street, at the base of Central Park Tower, which with 95 floors is the tallest luxury residential building in the world.

“I really wanted to capture the feeling of New York, the hustle and bustle, the architecture and fashion, and the unexpected moments that happen in the blink of an eye,” said Olivia Kim, Nordstrom’s vice president of creative projects, who collaborated on the campaign with famed street photographer and octogenarian Joel Meyerowitz, and his protégé Gus Powell, who took the photos.

Much of the photography was taken along Broadway. “It’s one of the longest continuous streets in the world,” said Kim. “I wanted to incorporate the idea that we [Nordstrom] are part of the center of the city.”

Whether it’s a scene of a woman walking her dog, hanging out in the park, or catching a cab, “We’re capturing those moments in a modern way. Those moments can seem mundane but they are actually wonderful,” said Kim.

With the fashion, “We really wanted to emphasize the democratic-ness of the brands we carry and how we define style. There’s everything from Valentino, Prada, and Gucci, to Levi’s, and New Balance and young designers like Bode.” There’s also Celine, Burberry, Hugo Boss, Nordstrom’s Men’s private label, Adidas, Topshop and Vans, to highlight a range.

Many of the outfits shown combine pieces from different designers and brands, reflecting how people are less inclined to wear a particular designer or brand head to toe. One photo taken on Mercer Street between Spring and Broome Streets shows a model in a Simone Rocha outfit, with another photo, taken on Broadway by Prince Street, shows four models hanging on a subway railing, in a range of outfits that mix labels, including The North Face and Levi’s. And photos of a woman on a scooter applying makeup at a stoplight and a man carrying a poodle are references to some of Meyerowitz’s iconic images that Kim and her team re-imagined. Meyerowitz was an early advocate of using color photography for street scenes, challenging other acclaimed photographers who believed color wouldn’t work for this type of photography. Meyerowitz also famously photographed Ground Zero after the Sept. 11 attacks on the World Trade Center, gaining access to the area when other photographers were not permitted on the scene, documenting all those involved in the clean-up.

To coincide with the upcoming campaign, Nordstrom will introduce a new company logo, designed by the internal creative team. It’s the first new logo for the retailer in 27 years. “It has been redesigned by our in-house team and is a direct reference from the Nordstrom logo in the 1930s,” a spokeswoman said. “This new logo is a representation of our brand’s history and future and its debut is timed to the milestone opening of our New York City flagship this fall.”

The campaign covers national print and digital, as well as local print and out-of-home placements in New York City including taxi toppers, subway stations, newsstands/shelters, buses and digital and print billboards. The language that will show up in the campaign is: “A Portfolio by Gus Powell in Collaboration with Joel Meyerowitz Celebrating the Opening of Our Newest Nordstrom Flagship at 57th Street & Broadway, NYC.”

“The New York store certainly will have special elements with quite a few surprises and delights in the space,” Kim said, without being more specific. “It will be our biggest and best statement of our brand. It’s our largest single project and investment.”