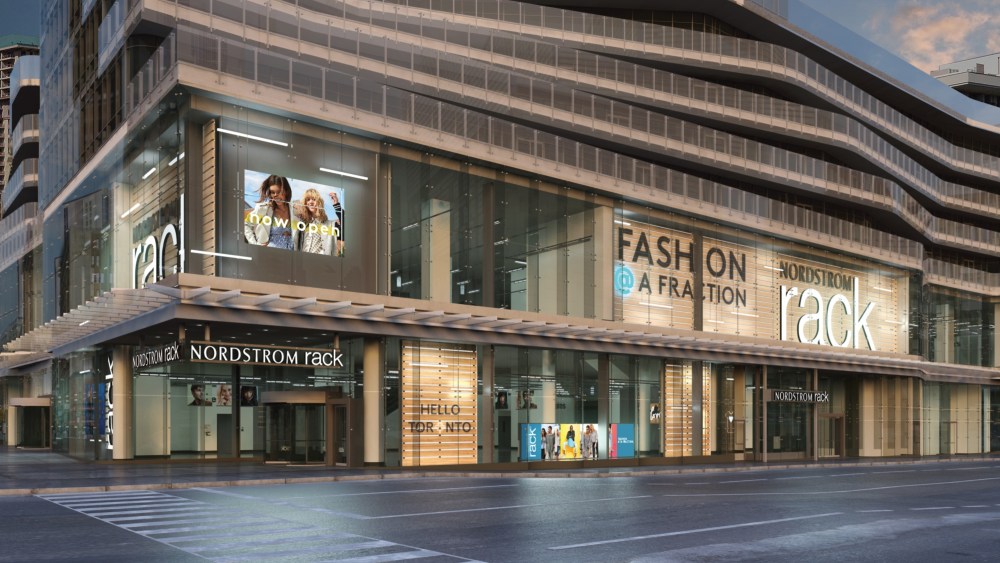 Nordstrom Rack muscles into Canada on Thursday, with an opening in Toronto’s Vaughan Mills big outlet center to be followed by five additional Racks later this year.

“We think the Rack presence in Canada could be 10 to 15 stores,” Geevy Thomas, president of Nordstrom Rack, told WWD. “I am continuing to look at sites.”

Compared to the U.S, “in Canada, off-price is a much, much less mature business, but it’s growing like crazy and still ripe for opportunity,” Thomas said. “Our offer distinguishes us from the competitors.”

During an interview, Geevy spoke about the expansion expectations for the Rack off-price chain in Canada; how Rack differs from its competition there, namely Marshalls, Winners, Homesense and Saks Off 5th, which have all already established footholds in Canada, and the synergies between Rack and Nordstrom’s regular-priced department stores. Nordstrom sees Canada as yielding $1 billion in revenues, Rack and Nordstrom department stores combined.

The entry of the $5 billion, 230-plus-unit Rack into Canada is highly anticipated, considering its success in the U.S. and because it delayed the Canada launch by two years. “Our intention was to open in 2016, but we had to get all our systems up to speed to allow us to write purchase orders in Canada,” Thomas explained. “It was completely the technology. We put in a whole new system to support the Canadian operation.”

Securing real estate was never the issue. “We had the locations,” Thomas said. “Our partners on the real estate side have been unbelievably supportive and patient.” In addition to Vaughan Mills on Thursday, Rack in Canada will open in Deerfoot Meadows in Calgary on April 26, at One Bloor in Toronto on May 3, and in the fall in The Ottawa Train Yards, South Edmonton Common, and Heartland Town Centre in Mississauga. On average, Rack Canada stores range in size from 25,000 to 30,000 square feet.

The Seattle-based, $15.1 billion Nordstrom Inc. has apparently changed its expansion plan for Rack in Canada, since it at one time contemplated up to 25 units. One reason was the company became more conservative over the number of Nordstrom department stores seen operating in Canada; there are currently six with no plans for more, though as many as nine have been envisioned in the past.

Rack in Canada isn’t a complete clone of Rack in the U.S. Rack Canada is getting a higher percent of offerings from Nordstrom department stores, as well as a greater emphasis on coats, premium denim, active, boots, handbags, luggage and swimwear categories.

The real estate scenario is playing out differently, too. With at least the initial openings, Rack units won’t be situated close to any of the six Nordstrom department stores up and running. The closest will be the Rack in Toronto on Bloor Street, which is roughly a mile from the Nordstrom flagship in the CF Eaton Centre. In the U.S., Rack frequently locates across the street from a Nordstrom regular-priced department store, and officials have said that they don’t cannibalize business from each other.

“We know a lot of our first-time customers at Nordstrom are buying their first designer item at Rack and then they walk across the street and want to see more,” observed Thomas. They might find some great Sam Edelman shoes at Rack, though as Thomas said, it’s likely a limited selection there compared to the regular-priced Nordstrom, where there would be a couple of tables entirely devoted to Sam Edelman styles.

“Rack stores are our single biggest source of new customers for Nordstrom,” Thomas said. “It’s the most effective and cheapest way of acquiring customers” for Nordstrom department stores.

But the bulk of merchandise at the Rack, in the U.S. or Canada, is excess merchandise and overstocks from suppliers. Rack sells that merchandise approximately three months after the same products are sold at the Nordstrom department stores.

There is also some merchandise at Rack expressly made for the off-price chain.

Like some of its competitors, Rack offers discounts up to 70 percent off and provides a “treasure hunt” shopping experience, motivating customers to rummage through the racks for great deals. Rack’s average ticket is higher than moderate-range off-pricers, at $32 to $34, versus around $15 at Marshalls.

Thomas said Rack stores receive new merchandise five times a week, with new merchandise introduced to the selling floor daily. “We are trying to create an environment where virtually every time customers come into the Rack, we show them new things.”

Further setting Rack apart are recently introduced services and technologies to make shopping easier and faster. They’re visible at the five-month-old Rack flagship on 31st Street in Manhattan and to varying degrees at other Rack locations. “There’s a lot that’s relevant for Canada — mobile checkouts, wider aisles, super-sized graphics, a flexible floor plan to grow and shrink and categories based on demand and supply,” Thomas said. “We are not stuck in a department store framework where we have a fixed base for each category.”

Other innovations at Rack are the “drop and shop” stations for fast returns; gender-neutral fitting rooms with lit mirrors, and “grab and go” fixtures within the beauty department for travel-size items like body cream and shampoo. Rack is also testing displaying assortments by category and size, rather than by label, to catch up to how off-pricers like T.J. Maxx are merchandised.

“Customers should be able to quickly find the things they are interested in and as efficiently as possible,” Thomas said. “We absolutely believe customers come to Rack to discover new things, but they’re not spending half a day in the store. It’s one of their stops on a multiple-stop shopping trip. They’ll go to the gym, the grocery store, and then pop into the Rack.”

In the U.S., Rack continues to see room for growth, having set seven openings and one relocation for 2018. “We are still opportunistically looking for locations in both Canada and the U.S.,” he said.

Addressing expansion, Thomas said the Toys ‘R’ Us bankruptcy and closings by other retailers present opportunities. “Those kind of announcements make us scour the lists” of retail sites coming available.

“We don’t have a number of new stores that we are pursuing. We are not pursuing a specific target,” Thomas said. “We look at multiple factors in determining whether or not it makes sense to add another store. We look at what the impact would be on our online businesses and how would it serve our full-price locations.”

Thomas has a long history with Rack. He became president of Rack in 2010, when the off-pricer had just 69 stores generating $1.2 billion in sales, and stayed until 2017, when the business surpassed $5 billion in sales and operated 232 stores. He was Nordstrom’s chief innovation officer for a short period until the beginning of  March, when he became Rack’s president again, succeeding Karen McKibbin, who retired.

Asked if his return to Rack signals new directions for the chain, Thomas replied: “It’s really a continuation of where the business has been evolving.”