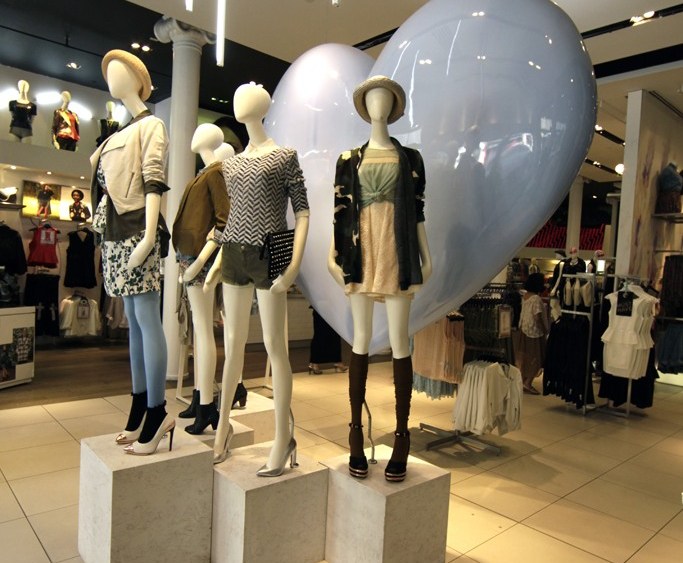 Through its deal with Topshop, Nordstrom will take a trendy turn this fall — and hopefully turn its women’s fashions faster.

On Thursday, the two retailers announced that Topshop will open Sept. 10 inside 14 Nordstrom locations spread across the U.S.

“We think our customers are going to love their take on trend-led fashion at great prices,” said Pete Nordstrom, Nordstrom Inc.’s president of merchandising. “But this is not a price play. It’s really a trend and fashion play.”

In an interview at the Topshop flagship in New York’s SoHo, Nordstrom and Green said they formed “a partnership” that transcends typical wholesale-retail relationships. Nordstrom will select and edit from Topshop’s extensive and quick-changing assortment, but will also be receiving some specially designed products, such as “premium” dresses for a dressed-up look. There will also be a catalogue just for Nordstrom to distribute to shoppers determined by the department store’s database who would be prone to buying the Topshop look, and live within striking distance of Nordstrom’s Topshops.

While Nordstrom said he’s not creating “hard shops,” the Topshops will still stand out from the rest of Nordstrom’s selling floors, which tend to be open in character, divided by departments rather than in-store shops. The $11.2 billion Nordstrom, which operates 117 full-line stores, the Rack outlet division and e-commerce, will also sell Topshop merchandise on its Web site, which currently does over $1.5 billion in annual sales, and hopes to bring Topshop to many more of its stores.

For the Seattle-based Nordstrom, Topshop represents a bid to perk up its women’s business which has been soft for several seasons. Nordstrom, in a few locations, has a new women’s format offering different adjacencies and a reimagined format. It remains to be seen whether it will be rolled out to more locations.

Topshop also represents a dramatic merchandising shift toward younger, edgier product, and will require some editing on Nordstrom’s selling floors to make room. Nordstrom does have a trendy side, selling juniors and contemporary merchandise in departments called Savvy, TBD and BP, but the retailer has a stronger reputation selling upscale traditional and classic styles.

Nordstrom said he expects that Topshop will generate higher productivity than the stores overall, which last year posted $431 in sales per foot on average. He declined to specify Topshop’s projected sales.

Asked what motivated Nordstrom to link up with Topshop — two brands with different images — Nordstrom said he believed there’s a growing awareness of Topshop in the U.S. He also said he’s impressed by Topshop’s “speed to market and great inventory control. Newness and full price drives it for us.” New styles will be flowing in weekly to Nordstrom.

At Topshop, products do get marked down to make way for the frequent distribution of fresh styles weekly. However Green stated, “We are not promoters. We are a full-price fashion business.”

The British brand is also known for nurturing young design talent such as Christopher Kane and Mary Katrantzou, and has an average price point of $75, though dresses can be a few hundred dollars.

For Topshop, Nordstrom represents a leap forward in advancing its North American expansion. This year, Topshop began building large shops inside The Bay department stores in Canada. Most are planned at 7,000 to 10,000 square feet, though at a few flagships, Topshop will occupy as much as 30,000 or 40,000 square feet.

Nordstrom has no thoughts of going anywhere near that big with its Topshops, and for good reason. “We don’t have all kinds of extra space. For us, it’s an editing question,” said Nordstrom. His department stores average 160,000 square feet, whereas The Bay has seven flagships that are four to six times as large.

Another distinction between the two Topshop deals in North America is that The Bay has a franchising arrangement, unlike the partnership with Nordstrom. Asked if Topshop was selling exclusively in the U.S. to Nordstrom, Green said, “It’s exclusive until we agree it isn’t exclusive.”

“This is a test for us,” Nordstrom added. “We want to really do good so we do have a chance to be exclusive. We want to earn that.” Topshop’s expansion in the U.S. via freestanding stores has not been rapid. Since opening the SoHo flagship in 2009, only two others — in Las Vegas and Chicago — have opened, though a fourth store is scheduled for Los Angeles in spring 2013. “Many good retailers get killed going into new markets,” Green said. “We continue to be very careful. It’s taken us a couple of years to understand the markets properly.” He said the SoHo flagship, located at 780 Broadway, is tracking over 20 percent ahead this year. “That shows we understand the market.”

Green assured that the Nordstrom deal does not in any way derail expansion via freestanding stores and said that 15 to 20 flagships are seen over the next five years. Nordstrom would represent different geographies from his own stores.

Green also said that there are no plans to sell Lord & Taylor in the U.S., which like The Bay is part of the Hudson’s Bay Co. A few years ago, Green was in contact with Bloomingdale’s about a possible partnership but nothing materialized.