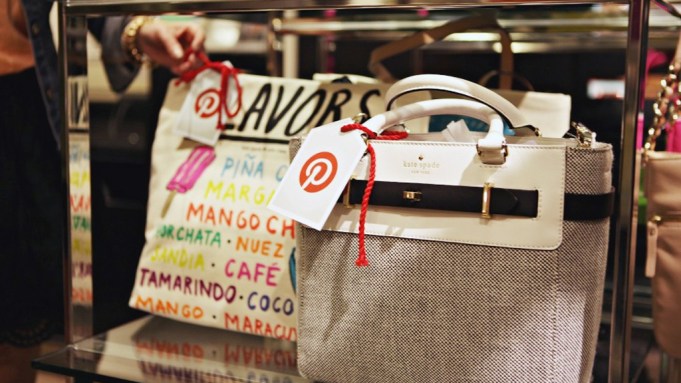 The convergence of off-line and online has gotten social at Nordstrom Inc., which has begun to identify in its stores items that are popular on Pinterest.

The retailer started leveraging Pinterest data in March with a pilot program at two stores — the Bellevue and Lynnwood locations near its Seattle headquarters — before rolling it out last month to a total of 13 with sites on the West Coast, Midwest and East Coast covering suburban and urban markets. At the stores, hangtags, cards and clips with the Pinterest logo are affixed to women’s dresses, handbags and shoes that are heavily pinned on Pinterest.

“There is a great opportunity for our salespeople and customers to have a dialogue. Customers are asking what the Pinterest logo is doing here. It is a good way to show what is trending out there in social,” said Bryan Galipeau, social media group manager at Nordstrom. “We were inspired by the initial feedback from the first test, and this is about proof of concept [to determine] could we take this to scale.”

Items demarcated at stores with Pinterest logos are mixed into their category or brand assortments or on their own dedicated tables. There aren’t specific numbers of items with the logos in each store. Instead, staff members at the stores decide how many products they’d like to highlight with the Pinterest symbols.

“We don’t want this to be overly forced. We want this to be an extension of what our salespeople already know,” said Galipeau, adding, “Our salespeople are really excited about this. They love the fact that social is coming to their stores in a physical way, so they are compelled [by their interest in the Pinterest initiative] to have a good selection of items.”

The trick to the in-store Pinterest program was aligning merchandise available at store locations with the merchandise cresting on the social network. Galipeau and Nordstrom spokesman Colin Johnson explained that alignment was accomplished with an internal app informing staff members at the stores of the items within their stores’ inventories that are favorites on Pinterest. Digital displays within stores use iPads to show customers the full array of items that are Pinterest hits.

“We have a completely integrated inventory platform between online and in the stores,” said Johnson. “This is another extension of how we can utilize that platform. On a store-by-store basis, we can figure out what product is most relevant for a store within the most pinned product.”

The current iteration of the Pinterest program at stores will run for a few more weeks and, after that, Nordstrom will evaluate whether it should spread to more locations, according to Galipeau. He called the early results “encouraging” and predicted that, in the future, stores would further reflect data collected from social networks.

“We definitely feel that this is a trend we are going to continue to see. Online is so powerful because it is so in-the-moment,” said Galipeau. “We get information about what people are interested in in real time and being able to bring that into the physical store is valuable.”

Nordstrom has 4.5 million followers on Pinterest, which Galipeau described as “the world’s biggest wish list,” and it is the retailer’s fastest-growing social network.