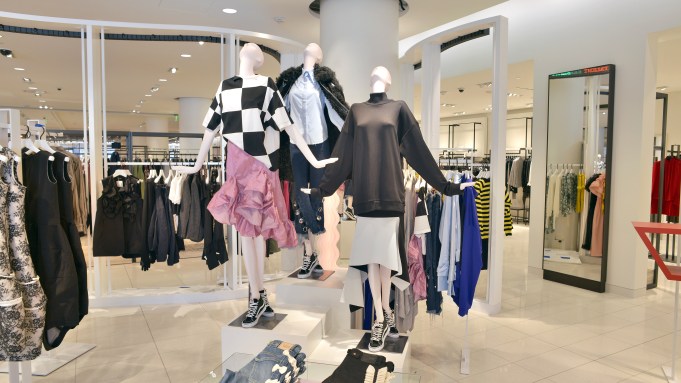 It’s a fresh start for Nordstrom Century City — and a big one at that.

The much buzzed-about move, part of a $1 billion redo of the Century City mall that also includes a refreshed Bloomingdale’s and Macy’s and first Eataly on the West Coast, reflects a fresh design for Nordstrom.

Nordstrom copresident Erik Nordstrom, who spoke with WWD last week ahead of the store’s opening, called it a fresh start following a few other store relocations in the Los Angeles area. That includes the 2013 move from the Glendale Galleria to Americana at Brand and late 2015 relocation from the South Bay Galleria to the Del Amo Fashion Center in Torrance, California.

“It allows us to build our very latest store design concept and then you add to it,” Nordstrom said. “In this case, this is a massive investment that Westfield’s done with Century City and it was already a really compelling center. We just really got excited about their commitment and what they’re doing to elevate what was already a great center and a great location.”

The executive went on to say the mall operator is investing in a big way into where retail is headed, raising the bar for the sake of offering not just convenience but also pumping up the experiential factor worthy of sharing with friends.

“We’re several years into a pretty big shift in our store design,” Nordstrom said. “Each store builds upon the one before it. In general, our [new] stores are more natural, a lot more modern, open. Part of that is not to view the store as an inward facing, closed off environment from what’s outside. It’s really connecting the inside of the store with the environment. Take a place like Century City — it’s in an urban environment that has a lot of energy around it. We think it makes a lot of sense to have a lot of windows.”

Flexibility reigns supreme under the Century City Nordstrom’s roof so that the retailer may react as retail shifts.

“Given the very fast pace of change that is part of the fashion retail world these days, flexibility needs to be part of the physical environment,” Nordstrom said. “We need a platform in our stores that allows us to bring in new concepts and pop-up shops.”

To that end, the retailer has upped the experiential quotient with a number of exclusives, including a Style Bar being piloted at Century City where a fleet of 10 personal stylists will be on hand to offer a complementary service that helps customers shop the store for gifts, a new wardrobe or single items. The store will also equip sales associates with Nordstrom’s digital style boards, helping them put together personalized recommendations for customers to look through and then shop. Nordstrom to You, another Century City exclusive, offers a door-to-door styling, tailoring or delivery service. There’s also YSL lipstick engraving and MAC Makeup Studio that provides lessons and consultations.

The Nordstrom x Nike sneaker boutique makes its debut in the Los Angeles market at Century City. Handbags will be presented across three different boutiques within the store and the designer boutique Space, by the retailer’s vice president of creative projects Olivia Kim, will feature lines such as J.W. Anderson, Noir Kei Ninomiya, Junya Watanabe, Simone Rocha, Comme des Garcons and Tom Wood among others.

The store’s features in aggregate speak to the changing retail environment that values cross-channel merchandising and shopping.

“I think it’s a mistake for any of us to think of our business in terms of channels,” Nordstrom said. “Customers don’t shop in channels. Customers just shop.”

The new lineup at Westfield Century City in many ways reflects that sentiment with a mix of the traditional in retailers such as Nordstrom, Bloomingdale’s and Macy’s along with a new crop of fresh concepts in Bonobos, Amazon Books or Disney’s new store format.

“I can’t think of a born-on-the-web brand that doesn’t have a physical store or doesn’t have that as part of their growth strategy now,” Nordstrom said. “Good shopping centers are embracing that and looking to answer a question of what does the customer today look for out of the physical store and, again, it’s not a physical store versus e-commerce [mind-set]. It really is embracing how customers actually live their lives and shop, which is combining the digital elements they love with the physical elements they love.”

Nordstrom plans to bow a new concept on Melrose Avenue the same day as the Century City store reveal that will test a more service-oriented format less focused on transacting and more on the experience under the Nordstrom Local banner in a bid to keep up with the continued fusion of the physical and digital.

“While it’s a lot of change for those of us that have a lot of history in physical stores — there’s obviously change we have to embrace with that — but it’s very exciting and there’s a tremendous amount of opportunity that comes with that,” Nordstrom said. “For us, this direction of digital shopping and digital influences being more and more a part of customers’ lives, it’s a direction we’ve been heavily investing against for quite some time.”