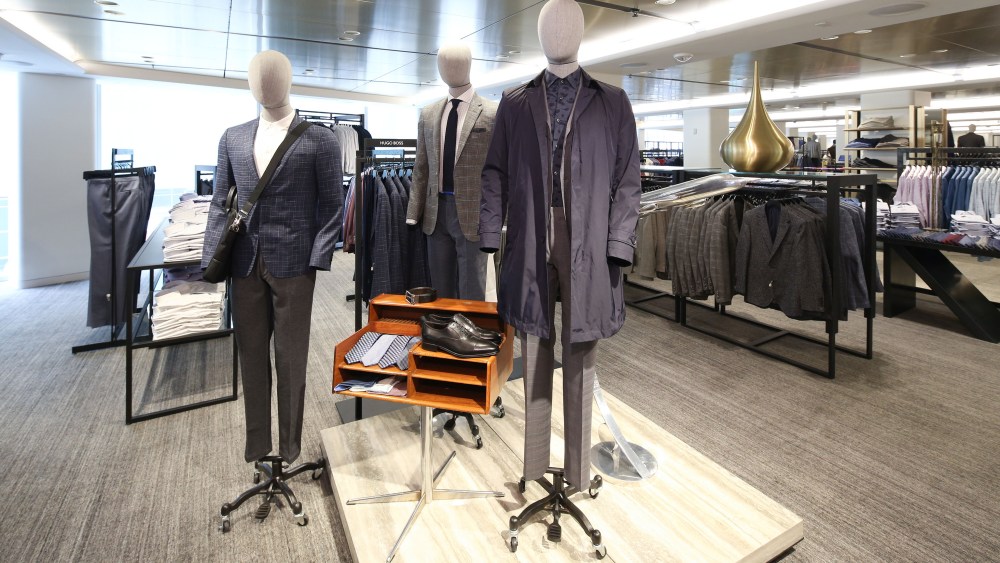 NEW YORK — Nordstrom is making a big statement to the men of New York.

On Thursday, the Seattle-based retailer will open the doors to its first full-price store in Manhattan — a 47,000-square-foot, three-level, stand-alone men’s store in the heart of Columbus Circle that is more heavily skewed to designer and contemporary merchandise and expected to be the highest-volume men’s producer in the fleet.

The store will offer up a number of exclusives, both in terms of new brands to the market — Jack Erwin, Cole Haan NYCH, Strong Suit by Ilaria Urbinati — as well as proprietary styles from some more widely distributed brands.

For example, the store boasts a Comme des Garçons shop on the main floor curated by Olivia Kim, vice president of creative projects for the company, that brings together six of the brand’s labels; a Christian Louboutin men’s shoe shop; customization areas for both Levi’s and Shinola; a Samuelsohn by Design suit visualizer for made-to-measure tailored clothing, and Eton’s Endless Aisle kiosk for ordering dress shirts.

In terms of amenities, the store has a coffee shop and a “clubhouse” bar/restaurant overlooking Columbus Circle. It also offers Express Return kiosks, Shop Online Pick up in Store and Reserve in Store services, as well as personal stylists and a team of tailors.

Even so, the company will be facing some stiff competition in the city. Bergdorf Goodman, Barneys New York and Saks Fifth Avenue are all within walking distance and the Time Warner Center offers stores from high-end men’s labels including Hugo Boss, Ted Baker, Robert Graham, Thomas Pink and Cole Haan.

But Nordstrom is confident it can find a niche here. The retailer has been seeking a space in the city for decades and finally decided to take the plunge when it secured the space uptown.

All told, this project is the company’s most complicated and costly, with a price tag estimated to be in excess of $500 million.

The official address is 3 Columbus Circle, and the store, which is being leased from SL Green and the Moinian Group, runs along the west side of Broadway from 57th to 58th Streets.

But because the store was built into an existing building, the space has its challenges. The biggest one is the fact that the main floor is split in two by an elevator bank for the building in which it’s located. That means that customers who are browsing through the Comme des Garçons shop on the south side of the building are forced to either go up or down a flight and then up or down again to get to the grooming department and Levi’s customization shop on the other side of the main floor.

Pete Nordstrom, copresident and chief merchant officer, said the configuration of the store — as well as the separation of the men’s and women’s stores — “wasn’t a strategic decision but a tactical issue” on the part of the company. So the company worked with what it had to “deliver the best possible Nordstrom store.”

“In a perfect world, we would be all in one building,” he said, “but in a practical world, we said ‘Let’s do this.’”

And creating a seamless main floor was not an option. “We couldn’t do any structural changes,” he said, acknowledging that the configuration is a bit funky and the building has lower ceilings than most of the company’s other stores. “But that makes it more intimate and interesting,” he said. “It will feel refreshing.”

Overall, Nordstrom said the size of the stand-alone store is similar to the space devoted to men’s in full-line stores, but in other units, men’s is all on one floor, which sometimes makes it difficult to shop because it’s so big. And so the segmentation will be more pronounced within the three-floor layout.

The store offers “more of an effort around the designer and fashion business,” he said, but also seeks to provide a “finesse and balance” that hits all categories and price points.

Paige Thomas, executive vice president and general merchandise manager of men’s apparel, believes the store offers a unique mix with a breadth of product not found anywhere else in town.

“This is not just our flagship store times two,” she said. “When we approached the merchandising, we thought of the customer we’d be serving. We know that we’re going up against the best of the best and we won’t out-Barneys Barneys or out-Bergdorf Bergdorf’s because they have their flagships here, too, but we believe we have the best brands in one store.”

Among the key brands include Balenciaga, Calvin Klein, Dior, Valentino, Louboutin and Comme des Garçons, all of whom have distinct shops, along with a large assortment of denim, activewear, tailored clothing and furnishings. There’s also a tech area with headphones, turntables and other items.

Instead, the company blended what it learned in Chicago with what it gleaned from its store in Vancouver, which attracts a lot of international shoppers, and created a mix that offers a “distortion of the designer business” and a larger assortment of accessories.

“It’s a purposefully curated assortment,” she said, “offering Nike to Balenciaga and Vans to Valentino, which is how the customer shops today.”

Pete Nordstrom added: “We want to serve the guy we’ve always had and attract a new customer.” He pointed to the growth of the women’s designer category as a case in point. “We see a similar opportunity in men’s. We hope people walk in and discover new things.”

Thomas said the New York store will actually carry 30 percent fewer brands than Michigan Avenue, but the labels that did make the cut combined to create what she believes is a distinct point of view.

Overall, men’s apparel, shoes and grooming accounts for around 20 percent of the company’s overall $14.5 billion in sales, Nordstrom said, and is a consistently solid business for the company.

“We think we have a good legacy in men’s,” he said. “And it’s been a big, strong, high-performing business for us. If you look at its profitability over time, it’s been really solid. And given everything that’s happened in men’s fashion, it creates a lot of opportunity for us — more than any other business.”

He said the increased “casualization of America” in general and men’s wear in particular, offers room for growth. “Before, he had two or three distinct wardrobes, now everything has collapsed and the lines are blurred. So we have an opportunity to have an assortment that is much more relevant to men and how they dress today.”

With guys wearing sneakers with their suit pants and hoodies under their blazers, it’s a “really exciting time for us to have a new spin on it.”

At the new store, he expects shoes — the company’s historical strength — to be particularly strong. “They probably represent more of a percent of total for us than the people we compete with,” he said. “That goes back to our roots — we sold only shoes for 60 years.”

The shoe department is located on the lower level and offers a wide assortment of brands, ranging from Adidas and Alden to Prada and Asics. The department features a shoe shine and sneaker cleaning station as well as a Nike Men’s Project boutique, which merchandises shoes and apparel from the brand in one location, co-mingled with other complementary labels.

Private brands such as The Rail, Treasure & Bond and 1901 are also part of the mix, but they’re seen as more of an opening price-point option for customers. “They help us deliver fashion at a price,” Thomas said.

She also called out some of the special features of the store including personal styling, mobile checkout and employees who are on call for customers 24 hours a day as other differentiators for the company.

New York is a key online market for the company and Pete Nordstrom believes it will draw a “loyal, repeat customer who appreciates service and value.” In addition to locals and workers, he expects the store will also appeal to the hoards of tourists who visit the neighborhood on a daily basis.

“We did a lot of thinking about this, because it cost so much darn money,” Nordstrom said. “But we believe the business opportunity is worth it. We took a more scientific view than we do with a typical store. When we open in a mall, we have so much context to draw from, and the stores are mostly similar. But doing business in an urban setting is more complex. Everyone we’re competing against has their most profitable stores here and it should be ours as well.”

While he’s optimistic, Nordstrom said he’s realistic, too. “It won’t be perfect on Day One,” he said, “it will evolve based on customer demand.”

Nordstrom said the company “had a good year in the Northeast” in 2017 “compared to the rest of the portfolio” and he expects the new stores will “increase awareness and our footprint in that part of the world. We believe our opening in New York will benefit the entire business.”

He said on a personal note that he is “super enthused” to finally bring the Nordstrom brand to New York. “After all these years of thinking about it, it’s hard to believe it’s finally happening,” he said. And being able to walk through the actual store, after seeing blueprints and plans on bulletin boards, is especially exciting. He revealed that the company actually rented a warehouse space in Seattle and set up a mock store to test out the design. “It was like a Hollywood set,” he said.

The last men’s-only store to open in Manhattan was Saks Fifth Avenue’s at Brookfield Place downtown. The 16,750-square-foot store in the former World Financial Center opened in February of 2017.

Bergdorf Goodman has long operated a men’s store in the city. Its 41,500-square-foot store on 58th Street and Fifth Avenue opened in 1990.

The Nordstrom family, whose retail roots date to 1901, has been juggling the New York project as they sought to take the company private over the past year. Last month, a special committee of Nordstrom Inc.’s board shot down the family’s offer of $50 a share, or $8.4 billion. And although the family was believed to have raised its offer, the effort still fell short.

Pete Nordstrom said that while the family was disappointed, it still holds out hope that one day, it will be persevere.

“If the opportunity presents itself, we would still be interested,” he said. “But until then, we’re committed to being the best public company we can be.”