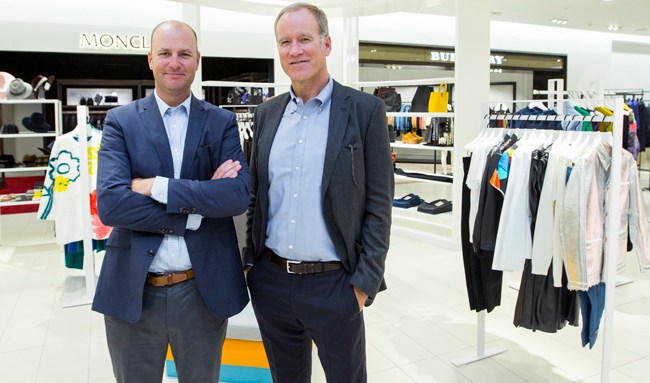 TORONTO — How far will Nordstrom Inc. take its Canadian expansion?

For sure, there have been hiccups as well as upside surprises — some seasonal misses and shipping challenges, along with better-than-expected designer sales and tourist turnouts.

The Nordstroms also say their two-year-old Canada business is operating above plan and that they have an “opportunistic” approach to real estate that could take the store count beyond the six full-line stores and five Rack off-price units already set.

“You’ve got to get scale so you can leverage that and create opportunities for things like the Rack, establishing an online business and establishing a credit card. Could we have a few more full-line stores? That remains to be seen,” Pete Nordstrom, copresident of Nordstrom Inc., told WWD during an interview at the company’s new store in the CF Toronto Eaton Centre. “It’s an opportunistic situation. With six, we start to have some scale. If a great opportunity comes up where we think we could do well, we will look at it.

“To be clear, we are not looking for any more today. We have the six. Let’s see how all that goes. And if opportunities present themselves, we should evaluate them, one at a time. We are doing well. Our sales exceed our plan.”

The Vancouver flagship, which opened in September  2015 after earlier openings in Calgary and Ottawa, “was such a great positive experience for us and has done so well. That’s been gratifying,” Nordstrom added.

The company doesn’t break out its Canada results from the rest of the Seattle-based chain, but did report that for the six months ended July 30, the Canada full-line stores, combined with Trunk Club and Jeffrey boutiques, generated $249 million in sales.

“We don’t have the ‘mission accomplished’ banner hung up there,” added Jamie Nordstrom, executive vice president and president of stores. “We’ve got several years more of hard work in front of us to feel like we are firing on all cylinders. We can’t issue credit cards in Canada yet. We don’t have a Canadian e-commerce site and because of that we can’t do things like buy online, pick up in store. While we are off to a really good start and the reception from customers has been terrific, we are not yet offering the full deal. We are not all we can be yet and it’s going to be a few years until we get there.”

In Toronto, “We are going to do a lot of business here,” he predicted. “Stores that we have opened in towns on the rise have been terrific. That’s what you are seeing here. This is boom town. I lost count of the amount of cranes I’ve seen.”

On Friday, the $14.5 billion Nordstrom Inc. opens its fifth full-line store in Canada, a 199,000-square-foot unit in Toronto’s upscale and highly productive Yorkdale Shopping Centre. The sixth full-line store will open in Sherway Gardens on Sept. 15, 2017, giving the retailer a third full-line location in metropolitan Toronto.

“Yorkdale represents our most directional store to date as we look towards our Manhattan store opening in 2019,” said Dawn Clark, Nordstrom’s vice president of store design. “We were able to start with a clean slate and build it from the ground up,” unlike Nordstrom’s four other stores in Canada, which are renovated former Sears properties with “design limitations in their transformations.”

Yorkdale “incorporates advanced levels of openness and light in its design,” Clark explained. “We’ve turned the store inside out, peeled back the exterior walls and replaced them with glass to bring in more natural light. The whole store becomes a window and it features more windows than any Nordstrom store. As day shifts to night, the whole store will start to glow like a lantern, revealing what is happening inside and deepening the connection between the store and the community.

“We’ve also opened up our shoe stockrooms by using veils of transparency that allow light to come through while maintaining the function of the space. There are very few solid department walls. Elevators and dressing rooms float within the store environment rather than being buried in a back wall.”

The store will have 12 designer boutiques including Burberry, Valentino, Céline and Chloé, each selling handbags and apparel; Delvaux, Loewe and Valentino have handbag shops, and Akris and Dries Van Noten each have apparel shops. There is also the JWN Room for personal styling appointments.

“After the Sherway Gardens full-line store opens, Rack growth really kicks in,” Pete Nordstrom said, noting that the first Rack store in Canada will open at One Bloor Street in Toronto in spring 2018.

“We have announced five Racks,” added Jamie Nordstrom. “We think the market supports 15 comfortably. Beyond that, as great locations become available we are able to be nimble and opportunistic.”

Opening six full-line stores in three years is aggressive for a department store, considering how online and mobile shopping are stealing business from bricks-and-mortar retailing. Yet Canada gives Nordstrom an opportunity.

“Nordstrom fills a lot of the white space between two sectors — Harry Rosen, Holt Renfrew at the highest luxury end — and Hudson’s Bay and Simons at the department store level,” observed Antony Karabus, chief executive officer of HRC Advisory and a native of Canada. “There’s been nothing in between, so Nordstrom’s merchandising crosses into the Bay, Holt’s and Harry Rosen.

“The stores are right on the money,” added Karabus, who attended the openings of the first four Nordstrom Canada stores. “They were incredibly well-done, very well-attended with significant amounts of shopping.”

Nordstrom’s traffic in Eaton Centre will be fueled by the concentration of law firms, private equity companies and banking headquarters in the area, considered the financial center of the city. It’s also a subway hub.

Mark A. Cohen, director of retail studies and adjunct professor at the Columbia University Graduate School of Business, had a different point of view on Eaton Centre. “There’s lots of transit traffic, but not lots of better business,” he said. “Sherway Gardens is a somewhat upscale mall but the community it serves is not heavily populated by truly upscale customers.”

And Calgary’s Chinook Centre, where Nordstrom already has a store, “is the right place to be but the timing isn’t great. Calgary business is just OK. The Province of Alberta is no longer booming, with the collapse of oil pricing,” Cohen said.

Regarding other Nordstrom locations, he was more positive. “I don’t think affluent customers in Vancouver flock to downtown, although Nordstrom’s proximity in Seattle and Vancouver’s heavy Asian population work in their favor…Ottawa, which is the country’s capital, is like Washington D.C. — recession proof — and Rideau Center [where Nordstrom has a full-line store] is the right place to be in Ottawa. And Yorkdale Center will be a bull’s eye. Bloor Street and Yorkdale are where all the better business in Toronto is done.”

With each opening in Canada, “We know a little bit more and hopefully we get a little bit better and then with some scale, it gets better too,” said Pete Nordstrom. “We should anticipate [business] being better today than a year ago.”

“Remember — a big part of this is our team,” said Jamie Nordstrom. “How much can it take on? We are building a really talented team in Canada. We are going to need store managers for all of the Rack stores. They’re going to be Canadians. A lot of them are sales people we just hired for our stores. We need to do it organically and make sure we are not going faster than our talent infrastructure can handle. That’s a long-term view, as opposed to a short-term view.”

Nordstrom is trying to hire as many Canadians as possible rather than transplanting U.S. workers, and has flown Canadians to the company’s store in Bellevue, Wash., for training. For the Toronto opening, new-to-Nordstrom department managers were partnered with the most experienced managers from the Vancouver, Seattle, Bellevue, Fashion Valley, Michigan Avenue and Oakbrook, Ill., stores for a five-week “immersive” training program.

With the rush of international retail into Canada, including Saks Fifth Avenue, Wal-Mart, Uniqlo, H&M, Costco and Apple, as well as the Toronto-based Holt Renfrew expanding its footprint, the Nordstroms believe Canada, where people historically complained about the lack of choice, is in danger of getting overstored. “That’s why we are proceeding cautiously and purposely,” Jamie Nordstrom said.

Initially, Nordstrom made some merchandise misses. “When we opened our store in Ottawa it was March and zero degrees out, and we had sundresses and sandals. People were skating to work,” Jamie Nordstrom said. “Seasonality is a little different here. We’ve become more thoughtful about that.”

“We knew it would be different in Canada,” said Pete Nordstrom. “It was even more different than we thought.”

On the other hand, he said, “The reception to our designer offer has exceeded our expectations. It’s done well across the borders but in Canada even better. I think it’s fair to say that there has not been as much choice in Canada as there is in the U.S. Essentially what we offer is an alternative and more choice. It’s worked out well for us.”

Executives cited Balenciaga, Céline, Delvaux, Saint Laurent, Loewe and Valentino as among the best-selling designer labels at Nordstrom in Canada so far, though the labels are not necessarily carried in all locations.

Canada, said Jamie Nordstrom, “has helped our partnerships with some designers. We are showing what we can do and that opens doors for us. It’s hard to look at the designer business on its own.” He sees a halo effect. “A healthy designer business does so much for everything else that we do.”

According to Pete Nordstrom, the tourist factor has “probably been the biggest unknown we have dealt with.” Interior care tags on products are in multiple languages per Canadian regulations; Vancouver and Toronto stores have “language ambassadors” who speak different languages to assist customers and in Toronto, the ambassadors speak 40 languages, including sign language. The languages are indicated on their name tags.

In the Canada expansion, Nordstrom has also grappled with issues shipping merchandise across the border, systems and exchange rates. “We are learning a lot,” Jamie Nordstrom acknowledged. “What we are happy about is that overall, the team has been able to roll with the punches on all these things and the customer doesn’t suffer. We are operating really productive stores.”