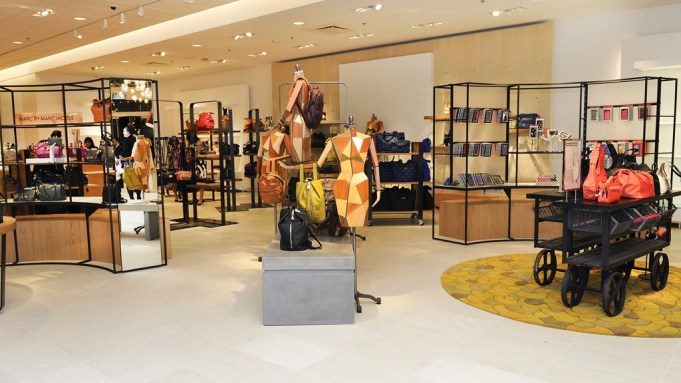 Nordstrom held a gala Tuesday night to unveil what is increasingly a rarity in its portfolio: a new full-line store in the U.S.

Officially opening Friday, the 135,000-square-foot store at Caruso Affiliated’s shopping center The Americana at Brand in Glendale, Calf., is the first and only full-line Nordstrom completed this year as the retailer has focused expansion elsewhere. The store was relocated from the neighboring Glendale Galleria, where it had been since 1983. While nearly 70 percent of Nordstrom’s revenues last year were from its full-line stores, it has estimated roughly half its sales over the next five years will be derived from a combination of the Rack, its online business and units in Canada.

Still, Blake Nordstrom, president and principal executive officer at Nordstrom, emphasized full-line stores are at the heart of the retailer’s operations. “They really establish our brand and the relationship with the customer. E-commerce and the Rack, these are other channels that allow the customer to shop on their terms, but they all are very synergistic and complement one another. It’s important that our full-line stores — our core — are really current and up to date. So, to be able to take an older store across the street at the Glendale Galleria and literally overnight move everything over here is great,” he said.

Another full-line U.S. store won’t open until September a year from now at The Woodlands Mall in The Woodlands, Tex., followed by an October opening at St. Johns Town Center in Jacksonville, Fla., before three full-line stores bow in 2015 at Ridgedale Center in Minnetonka, Minn., Mayfair Mall in Wauwatosa, Wis., and Del Amo Fashion Center in Torrance, Calif., a relocation destination. Comparatively, Nordstrom has opened 13 Rack locations so far this year, bringing the total number of Racks to 132, exceeding the full-line store total of 117, with 11 more Rack openings slated for the remainder of the year. The Rack division is expected to have some 230 doors by 2016.

When it comes to opening full-line Nordstrom stores in 2014 and 2015, a lot of the attention will shift north of the border prior to turning on Manhattan. Nordstrom has revealed that it will premiere full-line retail in Canada in September 2014 at Calgary’s Chinook Centre and subsequently add four full-line stores in Canada. Nordstrom envisions Canada eventually boasting eight to 10 full-line stores and 15 to 20 Rack locations, and sales of $1 billion.

In Manhattan, Nordstrom will build a seven-floor, 185,000-square-foot full-line store, and Blake Nordstrom recently visited its location. “For us as a family and as a company, we’ve been talking about and looking at Manhattan for a long time. We’ve had a couple of nonstarters, so to be able to have this opportunity by Columbus Circle on the West Side and to be there last week and to see the buildings coming down the hole there and to try to envision what’s going to take place, I think the thing that’s a challenge is that there’s a lot of work to do,” he said. “It doesn’t open until 2018 and it’s a big, complicated project, but we are excited about that location and now the ball is in our court for the next couple of years to execute something that hopefully the people in Manhattan are excited about.”

Back at the Americana, almost 1,000 people — including honorary chair Nicole Richie and host committee members Cher Coulter, April Danz, Silva Hameline, Emily Henderson, Melissa Magsaysay, Anita Patrickson and Estee Stanley — attended the gala benefitting the nonprofit organizations Hillsides and Ascencia. Caruso Affiliated founder and chief executive officer Rick Caruso lauded Nordstrom’s work on the store. “The designers of this store did a phenomenal job. It’s light, it’s bright and the merchandise is fantastic. Between here and The Grove, you have got the two best Nordstroms,” he said. “It just elevates everything we have done on this property and anchors it. It is a huge regional draw.”

Although Nordstrom has acknowledged softness in full-line retail sales and has reduced its annual same-store sales outlook to 2 to 3 percent from 3 to 5 percent, Caruso was optimistic about its prospects at the Americana, where he noted yearly sales are hovering around $1,100 a square foot. “I think brick-and-mortar is alive and well as long as you build the right brick-and-mortar and you wrap it with a great experience and great service. That’s what we do on our properties,” he said. “We have not seen a dip. We have only seen growth, and we are going to continue as we get into the holidays.”