Women's apparel and beauty were the most challenged areas last quarter.

Nordstrom Inc. shares fell sharply in after-hours trading Tuesday after the retailer saw a sharp decline in earnings and sales in the first quarter but said “executional misses are well within our control.”

First-quarter net earnings were $37 million, compared with $87 million during the same period in fiscal 2018. Earnings before interest and taxes were $77 million, compared with $153 million in the year-ago period, with the decrease driven primarily by lower sales volume, which fell 3.5 percent. Women’s apparel and beauty were the most challenged areas.

The results were released after the stock market closed, and Nordstrom’s shares promptly dived by more than 9 percent in after-hours trading to $34.40. At the market’s official close, the shares had been up 1.04 percent to $37.85.

“While we expected softer trends from the fourth quarter to continue into the first quarter, we experienced a further deceleration,” said Erik Nordstrom, co-president.

“We had executional misses with our customers, and we’re committed to better serving them. This is well within our control to turn around,” he said.

Nordstrom said inventory strength and expense execution “helped mitigate a meaningful portion of our sales miss. We ended the quarter with inventories in solid shape, and our financial position remains strong. We’re actively taking steps to drive our top line, and we’re focused on delivering on our financial goals.”

Nordstrom’s disappointing results follow the pattern evidenced through much of retailing this spring. Retailers have been citing excessive markdowns stemming from slow-moving spring merchandise, partly related to unusually cold and rainy weather this season up until the past week.

Retailers also believe consumers could be distracted by the divisive political climate as presidential campaigning picks up and tensions grow overseas with Russia, Iran, Venezuela and China. Still, for many retailers, current consumer spending patterns are bewildering, considering consumer confidence remains high and unemployment is at record-low levels.

Earlier on Tuesday, Kohl’s Corp. said its first-quarter net income dropped to $62 million from $75 million a year ago, and that comparable sales dropped 3.4 percent.

J.C. Penney reported a net loss of $154 million for the first quarter, almost double the year-ago loss of $78 million, and said comparable sales decreased 5.5 percent, and Macy’s last week reported mixed results with comparable sales up 0.7 percent while earnings were down.

Offpricers and mass merchants with low-priced merchandise, such as Walmart and TJX Cos., reported better results.

Erik Nordstrom explained that top-line results across all channels were impacted by issues in the loyalty program, digital marketing and merchandise. Reduced digital marketing led to traffic declines. There were issues in executing the launch of the Nordy Club loyalty program last year, and with merchandise. Nordstrom said the company has to rebalance assortments to better resonate with customers, in full and off-price stores.

During a conference call, Nordstrom said women’s was particularly tough in full-price stores and he acknowledged the company needs to find ways to appeal more to young customers and offer a better balance of price points.

Beauty suffered from some out-of-stocks and price promotion issues, Nordstrom added. But beauty historically has been a consistent performer for the retailer and is expected to rebound quickly.

“There’s a high degree of urgency to improve top line and profitability,” Nordstrom said during the call Tuesday.

While the full-line stores have been flat for around four years, Nordstrom portrayed the company’s emerging local market strategy as key to lifting that side of the business.

The strategy is geared to facilitate increased customer engagement across services and channels, faster deliveries and lower costs, and involves opening Nordstrom Local hubs which provide a wide range of services from alterations and tailoring to pickups and returns, but don’t sell merchandise.

“We know the more we engage, the more they spend,” Nordstrom said.

There are four Nordstrom Locals in the Los Angeles area. Two more will open later this year in Manhattan, which will support Nordstrom’s New York City women’s flagship that is on track to open October 24.

Nordstrom said the company is prepared to take its local market strategy “to our biggest markets across our portfolio.”

A lift to the full-line stores could also come from the Anniversary Sale this summer, which offers brand-new fashion arrivals at reduced prices for a limited time.

And Nordstrom said that for holiday, the company is aiming to make the full-line stores greater gift-giving destinations with more accessible price points.

“We own our results and we are focused on getting our sales back on track,” Nordstrom said. 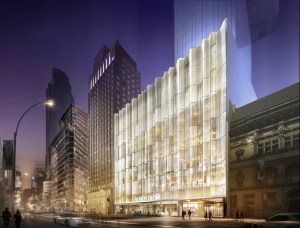 A rendering of Nordstrom’s Manhattan flagship.

Some gradual improvement in the top line is expected toward the back half of the year, with the New York City flagship contributing a big piece of it.

The much-anticipated, 320,000-square-foot, seven-level Manhattan flagship, the retailer’s first department store in New York City, is situated at 225 West 57th Street at the base of Central Park Tower, which with 95 floors is the tallest luxury residential building in the world. It’s considered the most expensive condo project in New York, listed at $4 billion by The Real Deal. Nordstrom’s project is also very expensive and is said to be running way above initial estimates. A couple of years ago, it was pegged at north of $500 million, but the price tag would have gone up since. Nordstrom does not disclose the cost of its stores.

Nordstrom will be confronting intensified competition from Bloomingdale’s and Saks Fifth Avenue, which have both undergone extensive renovations of their flagship sites, as well as from Bergdorf Goodman, its closest rival being situated just two blocks from Nordstrom, and Neiman Marcus, which opened in March in Hudson Yards on Tenth Avenue. All of the stores are expected to beef up service in advance of the Nordstrom opening.