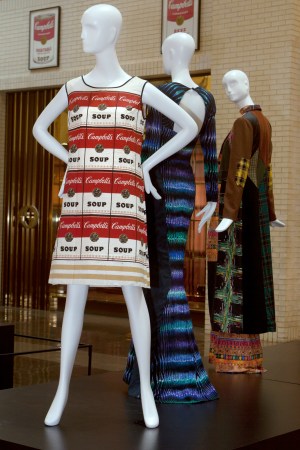 Is there anywhere else on earth where a flowing Halston pantsuit stands by the Andy Warhol “Flowers” artwork replicated in its print? Or where Warhol’s paper Campbell’s Soup dress has been displayed with 10 of the artist’s famous Campbell’s Soup paintings?

This is the work of Nancy Nasher, co-owner and creative impresario of NorthPark Center. Learning that the Warhol garb was to be featured in the “Art Meets Fashion” exhibition she had commissioned for the mall’s 50th anniversary, Nasher arranged to hang both series of artworks flanking the show.

“They have never left our house before,” Nasher said at the Art Meets Fashion opening party. “I grew up with the Campbell’s Soup [paintings] in our kitchen. ‘Flowers’ has been in my daughter’s bedroom since she was born.”

It also features striking looks by Rudi Gernreich, Halston, Michael Vollbracht, Oscar de la Renta, Todd Oldham, Pucci, Missoni, John Galliano for Givenchy and others. Most of the 29 ensembles came from the extensive Texas Fashion Collection at the University of North Texas.

“I wanted to do something really fun but also make a statement,” Walker explained. “Fashion is definitely an art form, and I feel like maybe museum directors and other curators sometimes just don’t get that all the time. This exhibition has given me the opportunity to show to a huge audience.”

Viewers of “Art Meets Fashion” will number in the hundreds of thousands before it closes Nov. 1, she noted.

At the exhibition opening, Nasher presented a $50,000 check to the Texas Fashion Collection and UNT’s College of Visual Arts and Design.

The donation was part of the mall’s 50 Days of Giving anniversary program, a $1 million-plus fund being distributed among 50 nonprofit groups through Oct. 28 via individual announcements. Emblematic of Nasher’s lifelong philanthropy, the gifts are earmarked for North Texas organizations in the arts, health care, education, nutrition, children’s services and animal welfare.

The largesse is one indicator of NorthPark’s unusual role as a community center. Most of the organizations have long relationships with the mall, having held major fund-raisers there or participated in NorthPark’s annual ArtsPark day with exhibits or performances of music and dance.

The Susan G. Komen Race for the Cure has started at the mall every year since 1995, swamping the parking lots as it raised a total of $31.4 million. An annual exhibition of sculptures made from cans of food has yielded 909,890 cans for the North Texas Food Bank since 1996. There are numerous other examples, including the 10,000-plus dogs and cats adopted at the mall through  the SPCA of Texas.

NorthPark’s function in Dallas’ psyche, however, is wider and deeper than philanthropy. Adults have fond memories of sliding down the sloping tile planters near Neiman Marcus as their children, grandchildren, or great-grandchildren do today. Likewise, children playing on the lawn in nine-year-old CenterPark will carry that with them.