The center boasts an art collection that rivals many museums, and serves to expose its visitors to a cultural as well as commercial experience. 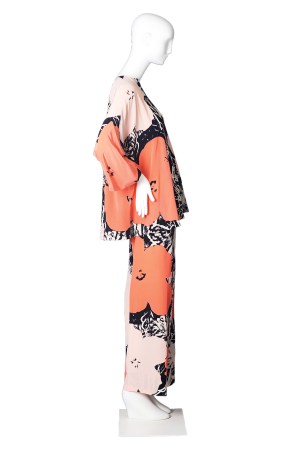 Ford Collins is only three years old and hardly a shopper, but he enjoys walking around NorthPark Center.

“He loves to look at the art,” explained his mother, Lindsey.

Ford has good taste, and he’s not alone. From Henry Moore to Andy Warhol and beyond, NorthPark displays significant, often monumental works by top 20th and 21st century artists. It’s easy to spy little kids — and adults — transfixed by the artwork.

That’s what mall founders and collectors Patsy and Raymond Nasher had envisioned, and what their daughter and successor, Nancy, upholds.

With 40 works on display by Frank Stella, Roy Lichtenstein and many others, fine art is visible from anywhere in NorthPark’s common areas. Several feature multiple elements, such as Warhol’s “Campbell’s Soup Cans” and “Flowers,” which each feature 10 paintings.

“NorthPark has better art than a lot of museums,” asserted Nancy Nasher, co-owner. “It is a huge part of our mission. I think we are the only shopping center in the U.S., if not the world, that is like that.”

Building on what her parents began, Nasher has installed about a dozen pieces in the last couple of years alone, including Anthony Caro’s rusted steel “River Song,” an abstract tableau of nautical and musical motifs, and Thomas Houseago’s “Yet to Be Titled (Peeking Figure),” a humanoid-robot looking creature that stands 9 feet tall.

She has introduced whimsical pieces from her own and her late parents’ collections, such as Borofsky’s white “Chattering Man,” whose jaw moves as a looped recording plays “chatter, chatter, chatter” or sings. Still to come are two Leo Villareal pieces to be unveiled Oct. 10: a commissioned sculpture inspired by his illuminated “Buckyball” series and a loan of the flickering “Diamond Sea.”

“We are making art part of your everyday experience,” Nasher affirmed. “It’s inspiring and educational and uplifting, and it makes people feel comfortable with art and more apt to venture to a museum or a cultural experience.”

As part of the center’s 50th anniversary festivities, Nancy Nasher commissioned an “Art Meets Fashion” exhibition of 29 fashion looks related to artistic styles of the past half-century, like a flowing Halston pantsuit juxtaposed next to the Andy Warhol “Flowers” artwork replicated in its print, or Warhol’s paper Campbell’s Soup dress displayed with 10 of the artist’s famous Campbell’s Soup paintings. The exhibition also features Pierre Cardin’s famous red bull’s-eye chemise and a pointillist-print long jersey sheath by artist Thilo Westermann and Escada creative director Daniel Wingate. Also on display are striking looks by Rudi Gernreich, Halston, Michael Vollbracht, Oscar de la Renta, Todd Oldham, Pucci, Missoni and John Galliano for Givenchy, among others. The show will be at NorthPark through Nov. 1. (For more on the exhibition, see WWD.com.)

The mall serves as a free gallery, but that wasn’t part of the original plan, observed E.G. Hamilton, NorthPark’s principal architect.

“When we designed the center, there was no mention of art,” he noted. “It was about two years after NorthPark [opened] that Patsy decided to focus on large sculpture because it was readily available and not many people had places to show it — and she had the perfect place.”

A prodigy who was high school valedictorian at 15, Patsy Nasher was the primary collector.

“She analyzed everything, and it had to be the very best,” noted Nancy.

Only two artworks have ever been damaged, and that was by unruly 21st-century children.

Nasher had purchased Joel Shapiro’s “20 Elements,” to serve as a colorful focal point in the new wing. Three days after the delicate, brightly painted wooden sculpture was installed, a little girl traversed its barricade of planters, grabbed on it and pulled.

“It shattered into hundreds of pieces, literally,” Nasher recalled. “We were devastated.”

Shapiro graciously rebuilt it, and Nasher had “20 Elements” anchored to an elevated platform rimmed with spiky cactus plants.

But nothing has dissuaded Nasher from sharing her family’s rich collection with NorthPark’s 26 million annual guests, which, she pointed out, is far more than visit the world’s most popular museum, the Louvre. Last year, she hired a manager to develop programming around the art.

“Many people have said to me, ‘I remember when my mother took me there and I saw the “Hammering Men” and it inspired me to learn more about art,’” Nasher said. “I think NorthPark has been very impactful in that way….It’s a privilege, and we are very honored to do it.”