From the Ground Up: Architecture & Landscaping at NorthPark Center

The architecture and landscaping is as much a driving factor at the center as the shopping. 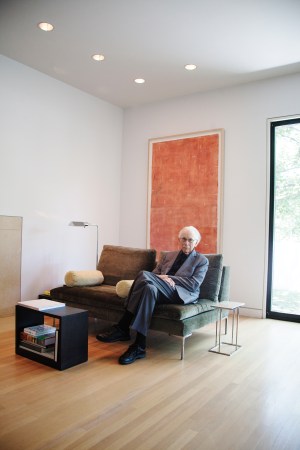 Now 95, Hamilton, a founding partner of Harrell & Hamilton, was the principal architect of every building at the center through the 20th century except Neiman Marcus, which was designed by Kevin Roche and John Dinkeloo and Associates LLC — successors to Neiman’s original architect on the project, Eero Saarinen.

The project benefited from Hamilton’s close friendship with Roche and Dinkeloo, who were fellow minimalists, and clients Patsy and Raymond Nasher. Hamilton had designed an apartment building in Tulsa, Okla., for Ray Nasher, which is how they met.

Hamilton proposed unifying the complex via a single palette of materials inside and out, a radical departure from other malls of the era.

“We were able to get everyone to agree that Neiman Marcus would be made out of the same thing as the Texaco station,” he noted in an interview at his Dallas home, which he designed — white and starkly minimalist with lots of tall windows affording bucolic views, despite an urban location on a relatively small lot a couple of miles from downtown.

In Dallas, Hamilton designed the Republic Bank Tower in 1965 and early phases of the University of Texas Southwestern Medical Center, among other projects. His best-known home is the award-winning Hexter House in Dallas, and he also designed the School of Law at Texas Tech University.

In the early Sixties, malls were springing up at a fast pace since the first one opened in 1956, but they were “visual chaos,” Hamilton grumbled, the result of several architects designing various structures independently. He also defied convention by recessing all storefronts into the walls.
“The real estate agents just hated that,” the architect recalled, because they wanted total control of the storefronts — and they were accustomed to getting it.

Each architect proposed a different color for the brick — traditional red, pale pink and yellow — but Ray Nasher felt white was emblematic of important buildings. Fired in east Texas, the creamy blocks were evenly finished with sand and stacked flush with the mortar to reinforce a sleek appearance.

Other key elements, Hamilton noted, were skylights and high windows ushering in sunlight, and the partitioning of each concourse with courts, creating a series of spaces that he felt were more comfortable than a “big, long, endless corridor.”

“A myth is that people always think of [NorthPark] as an expensive project, but it was a budget project,” Hamilton pointed out. “We were under strict restraints.”

Under Hamilton’s direction, his architecture firm became Omniplan Inc., still known as a retail and commercial specialist. One of his protégés, Mark Dilworth, became a partner in Omniplan. When the Nashers’ daughter, Nancy, and her husband, David Haemisegger, elected to expand the mall significantly in 2006, they turned to Dilworth.

“For both Nancy and myself, it was a bit of a daunting opportunity,” Dilworth recalled. “We wanted to make sure that what we did in no way upstaged the original, but had its own unique presence and scale.”

“Nancy and David wanted to be involved in every detail and were concerned about the quality,” Dilworth noted. “What more can an architect ask for?”

Dilworth liked the NorthPark experience so much that he left Omniplan and started another firm, Morrison Dilworth + Walls, so he could spend more time designing.

Creative landscaping has always been key to NorthPark’s refined look. It was one of Patsy Nasher’s passions, and has been embraced by Nancy.

Directed by Richard Vignolo for Lawrence Halprin & Associates from its opening through 1978, NorthPark’s landscaping has been designed ever since by Judy Cunningham. She searches for new, unusual and sometimes test tube-germinated cacti, orchids and other flora for four annual displays, ordering plants by the thousand a year in advance and arranging them in precise, painterly displays.

“Nobody else does that,” said Cunningham, who has landscaped 250 malls worldwide and credits NorthPark with launching her career. “So many people come through NorthPark and say, ‘We want that landscape,’ but it’s never going to happen because they don’t have the time, energy or money to do it.”

Case in point: four tree-sized aloe vera plants that she discovered in a remote California nursery were packed into pricey, custom-made crates and loaded onto a climate-controlled tractor trailer for their trip to NorthPark, where they now reside near Dillard’s. In another corner near Macy’s, a display of flashy orange leaves represents one of the first times this particular bromeliad has been used in public landscaping.

“Our goal is always to beat what we did last year and come up with something new,” Cunningham said. She and NorthPark landscape director Alice Goss present their seasonal horticultural picks in a pictorial layout for Nancy Nasher’s approval.