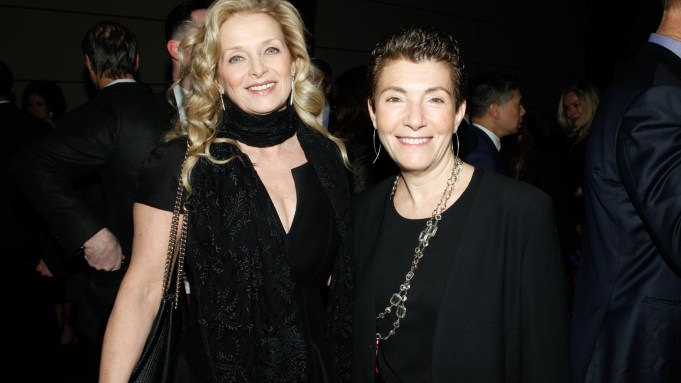 With a mix of levity — courtesy of former NBA champion Shaquille O’Neal — and determination to support the next generation of retailers, the National Retail Federation held its annual Foundation Gala at Pier Sixty in Manhattan on Sunday, drawing 850 supporters and raising more than $2.8 million for the foundation’s scholarships, educational and mentoring programs as well as NRF’s “Rise Up” agenda promoting the industry.

“If you ever need a 7 foot greeter at one of your Wal-Marts, I’m available,” said O’Neal, in presenting NRF’s “Visionary” award to Doug McMillon, president and chief executive officer of Wal-Mart.

O’Neal said when he was traded to the Phoenix Suns and set up with an apartment, he walked in at night and saw there was no furniture. “There was only one place opened at 11 p.m. That was Wal-Mart,” said O’Neal, who selected $37,000 worth of home furnishings at a Wal-Mart, but at the checkout was declined by American Express. “I got a call from American Express that someone was trying to buy $37,000 at Wal-Mart. I said, no that’s me….Doug, you’ve got to do something about that self-checkout line.”

McMillon, who started at Wal-Mart as a teenager unloading trucks at a distribution center, said when he was a buyer trainee in sporting goods, “I wanted basketball, but they gave me fishing tackle.” He met Wal-Mart’s late founder Sam Walton during an assignment where he had to come up with a rollback item. He presented the “bait mate” spray for fishing lures to attract fish. Walton, who happened to be there for the presentation, told McMillon, “That’s well and good but what makes you think fish can smell?”

“Sam was really a special person,” McMillon said. “He had this charm about him. He embraced change.” While Wal-Mart continues to change, “We’re just trying to sell stuff,” McMillon said. “So let’s get on with it and have a good time.”

Another speaker was David Townes, a former drug addict who through NRF’s Rise Up training program, got a job at Macy’s. “When I received the call from Macy’s that they were interested in hiring me I almost fainted. Rise Up not only changes lives, it helps to save lives.”

“Retail today and tomorrow demands an entirely different set of skills and talents, but the fact remains that retailing holds limitless opportunities for success,” said Karen Katz, chairman of the foundation and the outgoing ceo of the Neiman Marcus Group.

Among the highlights of the auction, Terry J. Lundgren won a dinner and selfie with O’Neal for $6,000, and James Rhee of Ashley Stewart and newswoman Soledad O’Brien together won a trip to Haiti to support relief efforts, but they weren’t precisely sure how many thousands of dollars they bid.

Among the 35 scholarships distributed this year, Courtney Nash, a senior at the University of Arizona, was the top recipient with a $25,000 scholarship, while Ashley Cairns, Blake Fortin and Kendall McDermott from Columbia College Chicago, were the top team in NRF’s Student Challenge competition, with each awarded a $5,000 scholarship.

“We are so grateful for the retailers and partners who made 2018 another record-breaking year for the gala,” said NRF Foundation executive director Ellen Davis. “Our work is made possible through generous contributions from companies and individuals who believe in the future of retail and see it as the industry that powers America’s workforce.”

The gala capped off the first day of NRF’s three-day “Big Show” convention at the Jacob K. Javits Convention Center, which drew a crowd of 37,000, including retailers, suppliers, fashion executives and others in one way or another tied to the industry.