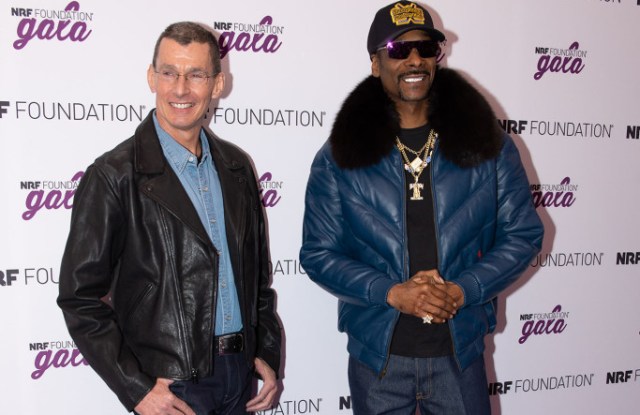 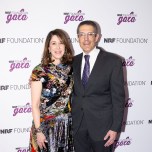 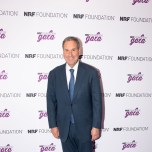 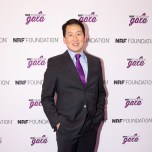 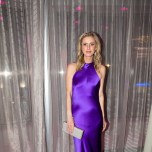 “I like to say everybody has a Levi’s story,” said Chip Bergh, Levi Strauss & Co. president and chief executive officer.

So he told his, at the annual NRF Foundation Gala at the Sheraton New York Times Square Hotel Sunday night where Bergh was honored with NRF’s Visionary Award.

It was long before he joined Levi’s and he was staying at a hostel in Europe, backpacking through the Nordics. He left his wallet on the window sill of a shower, and his Levi’s pants as well, which he washed and left to dry. Forgetting his wallet there, Bergh rushed back to the shower and was relieved to see his wallet still there. “But they stole my Levi’s.”

That made an impression about the power of the Levi’s brand.

Seven years ago, Bergh became ceo of Levi’s. He’s emerged as an “activist” ceo who runs a business that supports social purposes. But the most important factor behind Levi’s turnround story is “the fans, the customers,” he said.

Calvin “Snoop Dogg” Broadus Jr. presented Bergh with his award — Snoop Dog and Levi’s have worked together on projects — and during the auction, someone bid $8,000 for a selfie with Snoop. In total, the event raised more than $3.2 million to support the foundation’s educational initiatives, student scholarships and Rise Up retail credentialing program.

The gala drew more than 1,000 ceo’s, senior executives, industry insiders and students and celebrated NRF’s List of People Shaping Retail’s Future, which included Albirds cofounders Tim Brown and Joey Zwillinger, and
Shea Jensen, Nordstrom’s senior vice president of customer experience, who were honored as “disruptors.” Jo Malone, founder of Jo Loves, was among the “dreamers” honored, and Oliver Chen, managing director, retail and luxury head, Cowen, was among those honored as “influencers.”

“We are so fortunate to have retailers and partners who are willing to step up and support our industry and initiatives,” said NRF Foundation president Ellen Davis. “Retail is the industry that powers America’s workforce.”

Davis recalled working the sales floor at Bath & Body Works store, and helping kids pick out products for Mother’s Day. “They would feel great about what they were giving to their moms. Retail isn’t just about products. It’s about the impact it has on people.”

Karen Katz, former chairman of the NRF Foundation and former ceo of the Neiman Marcus Group, said, “Young people today seem more clever. They’re thinking about careers in much more defined ways.” And the mission of the foundation, she added, is to help encourage different people, particularly those with STEM educations, enter the industry.

“As the retail business is getting more complicated and sophisticated, it gets more and more challenging to find qualified people,” said Claudio Del Vecchio, ceo of Brooks Brothers. “The work of the foundation is fantastic in exposing the great opportunities in retail.”

John Furner, head of Sam’s Club, said when many people think of retail, they think of stocking or running checkouts, but there are jobs involving web sites, new technologies in data and logistics, even behavior psychology. “The key is to keep updating the work experience,” to make jobs more attractive and retain workers.

“There’s a scarcity of talent and retailing is competing against a lot of other industries for talent,” said Stephen Sadove. Asked if retailing is doing a good job of marketing itself as a career alternative, Sadove replied, “It’s starting to, but there’s a long way to go.”