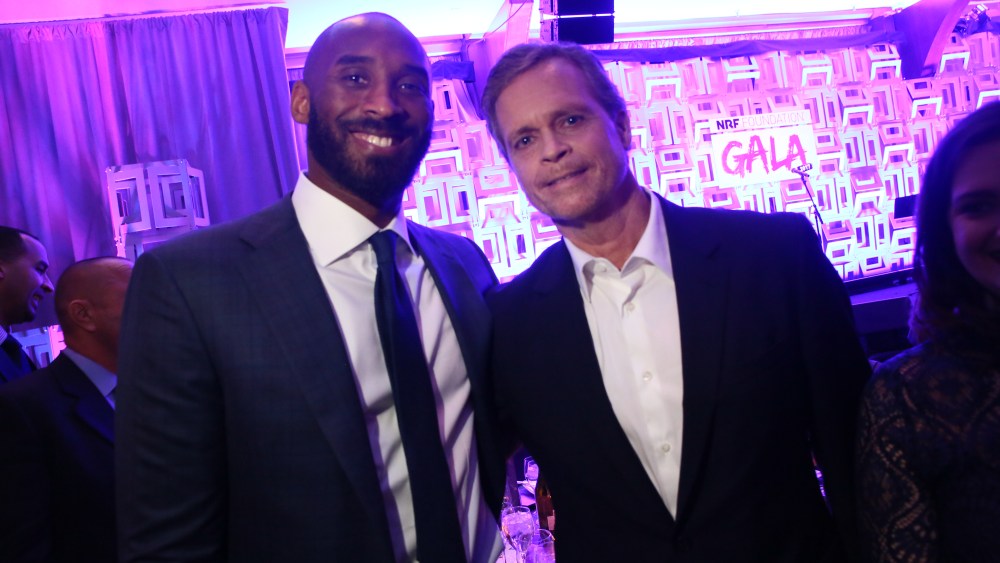 As challenged as many of them are, retailers can still party for a cause.

On Sunday night, a crowd of 735 converged on Pier 60 of Chelsea Piers, for a gala raising $2.1 million for the NRF Foundation, which supports scholarships and advancement programs for young retail professionals and shines a light on job opportunities in the industry.

There was dancing, silent and live auctions, performances by The Voice finalist We McDonald and stars of Broadway shows. Guests met Miss America 2017 Savvy Shields and Daymond John of Fubu and “Shark Tank” fame, who came with 12-year-old Mikaila Ulmer. John invested $60,000 in Mikaila’s company, Me + The Bees Lemonade, on “Shark Tank.”

“Mark and I collaborated for more than 13 years,” Bryant said. “I’d throw some weird and crazy things at him, but our meetings always ended up in a place of infinite creativity.”

“That’s what I love — working with athletes that set a high bar,” Parker said. “Kobe is proof that athletes are an endless source of inspiration for Nike. Nike’s mission is to bring innovation and inspiration to every athlete in the world. Innovation in retail is everybody’s opportunity.” He feels a personal challenge to listen to consumers, every day. “Let them be the North Star.”

The festivity put a positive glow on an industry enduring massive consolidation, with retail leaders affiliated with the National Retail Federation emphasizing that there is plenty of retail career opportunity. Just the day before, the NRF Foundation announced the launch of “Rise Up,” a training and credentialing initiative to help people acquire the skills to find jobs in retail leading to promising careers. So far, 21 companies have pledged support for the program, including Ashley Stewart, Brooks Brothers, HSNi, The Kroger Co., L.L. Bean, Macy’s, Neiman Marcus Group, Target Corp., Under Armour, Vera Bradley and Wal-Mart.

“You can really feel the energy and the commitment here. It’s at a level I’ve never seen before,” said a pumped up Mindy Grossman, ceo of HSNi.

This week, Grossman becomes the first woman to chair the board of the 106-year-old National Retail Federation. She succeeds The Container Store’s chairman Kip Tindell. “We are trying to support people at every level of their career, and  to basically insure talent coming into the retail industry,” Grossman said. “Retail accounts for one out of every four jobs in America.”

“Our mission and purpose — to inspire the next generation of leaders in the retail industry — is so important,” said Karen Katz, president and ceo of the Neiman Marcus Group. She too, adds another professional hat this week, becoming the new chairman of the NRF Foundation. “Part of our goal at the NRF and the NRF Foundation is to reframe how we convey just how many amazing opportunities there in the retail industry,” Katz said. “Students today are so much more sophisticated about making career choices. We have to be more strategic in attracting the best and the brightest. There are incredible jobs” Katz said, citing technology, mobile, data analytics, marketing, creative, among other areas.

“There are 700,000 jobs unfilled, from sales clerks to engineers to ceo’s,” observed Stephen Sadove, former Saks Fifth Avenue chairman and ceo, and a member of the NRF board. “People have the perception that retail is about clerking jobs. So does Capitol Hill. Retail is so much more.”

At the gala, which is held in conjunction with NRF’s annual “Big Show” convention and expo at the Jacob K. Javits Convention Center, conversations focused on the impact of Amazon, store closings on the horizon, artificial intelligence, potential Trump Administration policies affecting jobs, infrastructure, health care, trade and taxes.

“It was a tough year,” Mitchell Modell of Modell’s Sporting Goods, said of the industry. “Retailing is changing at such a fast pace, but the mood is very positive. The start of the new year and the NRF convention [the “Big Show” which concludes Tuesday] is about breaking out fresh new products and ideas.”

“Everybody is walking around a little tentative, at least in apparel,” said David Jaffe, ceo of Ascena Retail Group. “Old Navy and Children’s Place, with their low prices and deep value are performing, but the mid market had more challenges.” This year, “retailers really have to be on their game,” Jaffe added. “We all have to transform our model. Consumers do love the convenience of Amazon but they still want fashion and value.”