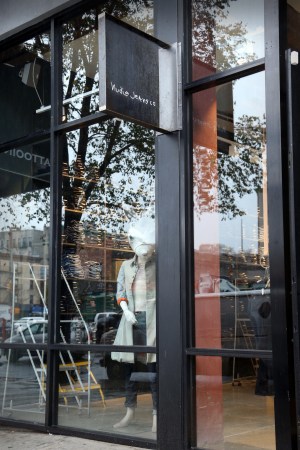 As part of a methodical and disciplined approach to growing its brand worldwide while also walking the talk about its sustainable practices, Nudie Jeans has opened its 20th Repair Shop, which is the second in the U.S.

The 1,400-square-foot shop, which is down the block from the company’s North American headquarters, is located at 188 Bowery — on the corner of Spring Street — in New York City’s NoLIta. Nudie Jeans Repair Shops are in Gothenburg, Sweden, (where the company was founded); Stockholm; Berlin; Sydney; Zurich; Osaka, Japan; Los Angeles, and in London’s Soho, among others cities. The Repair Shops offer free repairs on all denims.

Palle Stenberg, chief executive officer and cofounder, said the Repair Shop augments the company’s “strong and robust wholesale business in North America.” This is the first year the company is operating directly in North America. Previously, it partnered with Want Agency for sales and marketing distribution.

Founded in 2001, Stenberg describes the company as a “young brand,” and said, “so, for us, New York is an exciting launch as it is giving us the opportunity to run and control our own business with a window to the public in one of the best cities and countries in the world.”

The company described the New York shop’s design concept as “raw and dressed down, with the material palette consistent with other Repair Shops — hot rolled steel, Valchromat, and natural saddle leather, which will age just like the Nudie Jeans dry denim.” The company also noted that the shop’s “original concrete floor has been maintained — it is a raw material and fits into the concept and palette, and with the muted, the emphasis is on the product.”

And keying into Nudie Jeans’ “reusing philosophy,” the store will feature vintage furniture and fittings. The company also noted that the near-14-foot-high ceilings will be utilized similarly to what the company did with its Shoreditch London store “by building a tall denim wall.”

“Long natural saddle leather straps are suspended from the ceiling with the denim fit guide to educate customers,” the company added. “The cash wrap has been designed and integrated in the middle and heart of the store between the original columns, both connecting the space and utilizing the space efficiently and ergonomically.”

Stenberg explained that Nudie Jeans’ long-term goal “and vision is working toward preserving the environment.” Last year, the company repaired 30,000 jeans in its Repair Shops. For 2015, the company expects to repair more than 40,000 pairs.

“As part of that, we want to give a lifetime guarantee on our jeans through our Repair Shop service — a practical message of sustainable practices,” Stenberg said. “Current state though, we cannot really shout this out so much as we do not have Repair Shops in all locations.”

The ceo went on to say that retail expansion is necessary “to really promote our message and offer our free repair service on our denims in a more widely accessible way.” Other retail launches on deck include Copenhagen and Munich. From a marketing perspective, the shops also drive sales to its wholesale customers, which includes many specialty stores and independents as well as department stores such as Barney’s and Nordstrom. But location is key.

“The Bowery and Spring location is not an ‘A’ location, and feels more neighborhood than commercial,” Stenberg said. “None of our stores though are located in ‘A’ locations. Because of our strong in-store service offered, it is both purposeful and nice at the same time to locate ourselves in areas less commercialized, with personality and identity, while staying accessible.”

Stenberg said the company was drawn to the site and neighborhood, “and this specific corner gave us a gut feeling.”

The ceo said the New York opening “will support our existing wholesale business as well as e-commerce and strengthening brand’s full picture. Our recipe for retail expansion does not look at a cookie cutter approach of opening on every corner, rather we are opening stores with the mind-set to strengthen all channels in sync not just locally but on a global scale.”