New looks and new customers are propelling a resurgence in the business. 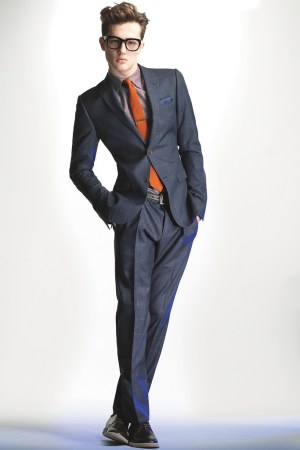 Men’s wear is on a roll.

Driven in large part by slim silhouettes in tailored clothing and furnishings — and a fashion-conscious young guy — the once-plodding men’s sector is running at a sprinter’s clip.

Vivid colors in classifications such as jeans and khakis, military themes, heritage brands and updated patterns have also boosted the sportswear sector. Even categories such as hosiery and swimwear have found fans, as bold patterns in socks and shorter lengths in swimsuits have taken hold. New brands and updated fabrics have given life to the men’s underwear category.

The results are being felt across retail, with stores from luxury retailers to the more moderate chains experiencing an uptick. And while the third quarter was a bit of an anomaly, with major men’s chains stumbling a bit, most retailers believe the momentum will continue into 2013. In the period ended Oct. 27, The Men’s Wearhouse Inc. missed analysts’ expectations and reduced its guidance for the fourth quarter despite a 22.5 percent rise in net income and a 7.9 percent increase in sales. The week before, Jos. A. Bank Clothiers Inc. said net income fell 11.2 percent on an 11.1 percent gain in sales. The business, notably, was highly promotional.

Even so, the retailers said contemporary tailored clothing and dress shirts continued to drive sales. Doug Ewert, chief executive officer of Men’s Wearhouse, said the “growth drivers include modern and slim-fit suits and sport coats.” Neal Black, ceo of Jos. A. Bank, also pointed to suits as a top performer.

During the year, retailers invested in upgrading their stores and tweaking their merchandising strategies to appeal to a younger guy who is seeking an updated shopping experience. He’s comfortable mixing brands and classifications, seamlessly merging suits and suit separates to create his own individual style. He’s even having an indelible impact on the more traditional shopper whose wardrobe now seems obsolete.

The new men’s wear customer thinks nothing of wearing a suit jacket with a denim shirt, bow tie and dress shoes. And he’s embracing brands with a rich American heritage, giving a boost to labels such as Brooks Brothers, Hickey Freeman, Woolrich, Pendleton, Macintosh and others.

This has opened up a window of opportunity for stores.

In the spring, Barneys New York tweaked its tailored-clothing floor, mixing sportswear and clothing from classic vendors such as Brioni and Kiton for the first time. But it was certainly not alone. Saks Fifth Avenue this fall completed a renovation of its flagship, merging all classifications from its core vendors into lifestyle shops. “We don’t have a suit department and we don’t have a sportswear department anymore,” said Eric Jennings, men’s fashion director. “Men have so many more options in the way they dress today. It’s much more fluid.”

Earlier, Saks had renovated its accessories area to capitalize on the trend in this popular category. “Men are now asking what the right bags and shoes are,” said Tom Ott, Saks’ senior vice president and general merchandise manager of men’s.

Not to be outdone, Bloomingdale’s this fall overhauled the furnishings and accessories area at its 59th Street flagship, installing main-floor shops for Gucci, Prada and Louis Vuitton and refreshing the assortment for standbys such as Thomas Pink, Turnbull & Asser and others. David Fisher, executive vice president of men’s wear, said the rejiggering is a reflection of the continued strength in the men’s business, which has had “incredible growth” over the past few years. “We’ve got some grease on the wheel,” he said.

Bergdorf Goodman completed a yearlong project that resulted in a completely new third-floor contemporary designer department and the creation of a shoe library on the first floor that tripled the space devoted to that category. As ceo Joshua Schulman summed, “[With men’s among the] fastest-growing categories of business industrywide, it was the appropriate time to make the investment and statement.”