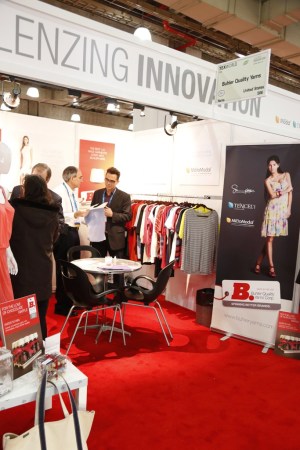 From issues of sustainability and performance in fibers and fabrics to shifting trade patterns and economic uncertainties, sourcing executives at last week’s Texworld USA and Première Vision Preview exhibitions were devising strategies on where to purchase materials and produce merchandise in the year ahead and through the spring 2014 season. There was much talk of how real the Made in America revival is and what direction it might take. Companies such as Buhler Quality Yarns, Laguna Fabrics and Tuscarora Yarns at Texworld, held at the Jacob K. Javits Convention Center, said their business had increased and they see continued interest in U.S. manufacturing for its quick-turn capability, better quality control, customization and smaller production runs. They also see Made in America’s viability being strengthened by rising labor costs in Asia, especially China.

The conversation was spiked by Wal-Mart’s statement that it would commit to sourcing $50 billion worth of goods in the U.S. over the next 10 years, including in apparel. Kevin Burke, president and chief executive officer of the American Apparel & Footwear Association, said if real, it was a significant development.

“What will be interesting to see is how much apparel and footwear is involved, and if there are the capabilities to produce” what Wal-Mart will seek to buy, Burke said. Speaking on a panel at Texworld dubbed “Politics of Fashion: Impact of the Election on the Textile Industry,” which also touched on U.S.-China relations and the Trans-Pacific Partnership talks, Burke asked the audience how many people would be willing to pay more, as much as 25 percent higher, for apparel or footwear if it was made in America. A show of hands had a clear majority of the 50-plus people in attendance answering in the affirmative.

Burke said if U.S.-made goods can become competitive again — either due to rising costs in Asia, better automation or lower overall cost of making goods, such as energy savings in the U.S. compared with foreign countries — then a revival of Made in America could take hold. “Nobody would be against or argue about the job creation potential it would have,” Burke said.

Jeffrey Silberman, chair of the Textile Development and Marketing Department at the Fashion Institute of Technology, said he sees development in specialty products for U.S. manufacturing. He also challenged the argument that there aren’t enough people wanting to work in the industry and said FIT and many other schools, including a contingent of students in the audience from the Savannah College of Art and Design, graduate qualified students every year who are trained in areas such as production, design and technology but who wind up taking good positions abroad because their aren’t enough jobs in the U.S.

Burke agreed, “With the unemployment situation…the way it is, I wouldn’t think filling positions would be a problem.”

Jim Lovejoy, marketing manager for Seams, the National Association of the Sewn Products Industry, said one proof that interest in Made in America is real is that membership in the group has grown to 180 members from 150 a year ago. He said he had many inquiries at his booth at Texworld from companies looking to source more in the U.S. or that needed help growing their operations. Lovejoy said Seams helps companies through networking and educational tools, as well as assistance in such areas as benefits packages. Its Web site, seams.org, offers a free B2B database.

David Rashan, president of Laguna Fabrics, a Los Angeles knitter, said he was having conversations at the show with firms wanting to produce in the U.S. Of Wal-Mart’s pledge, Rashan said, “Hopefully it will lead to more interest in American-made goods.”

David Sasso, vice president of sales at Buhler, said, “We’re excited about what’s happening with manufacturing in the United States, but there are some [questions] in trying to find the players.”

Many fiber and fabric firms at Texworld and PV Preview at the Metropolitan Pavilion featured sustainable textiles — including Lenzing’s new Modal color that allows for coloring its cellulosic fiber made from beachwood in its closed-loop processing system; recycled polyester yarns and fabrics from Italy’s New Life or Taiwan’s Hyperbola; Unique Way International of Taiwan’s “Coffee Yarn” made from coffee grounds that trap odor, wick moisture and offer UV protection, and China’s Hemp Fortex Industries’ fabrics made from hemp, and organic and recycled cotton. Many companies stressed their certifications in organic, processing or social standard organizations such as Global Organic Textile Standard, OEKO-Tex Standard 100, Flo-Fair Trade and Worldwide Responsible Apparel Production.

Ria Stern, global marketing and brand director for Hyosung Holdings USA, said, “One of the megatrends we’re seeing is for products that offer added value: quick-dry, shaping, UV protection, warming, cooling, easy care.” Stern said Hyosung, which derives 17 percent of its $10 billion in annual sales from textiles, makes a wide range of products, from its category-leading Creora spandex to developments in recycled polyester made from plastic water bottles and recycled nylon made from fishing nets.

Sasso said Buhler, which primarily spins fine gauge Supima cotton and Modal and Tencel yarns in its Georgia facility, said sustainability comes into play not just in the way his company operates, but “when we are deciding who to work with along the supply chain, so that we can tell the right story to the retailer.”

At PV Preview, traffic was brisk as fabric firms were focused on innovation and maintaining or expanding their export businesses to the U.S. given the difficult European economy.

“It’s confirmation that the market is picking up and experiencing continued recovery since the financial crisis of 2008-09,” Pasquet said. “Unfortunately, the situation is not the same everywhere, especially in Europe. Our exhibitors here export from 50 to 100 percent of their product. At the moment, the market is very tough, especially in the southern part of Europe — Italy, Spain, Portugal — because of weak consumption, high taxes, debt problems. France is very weak, as well. There is no huge growth anywhere in Europe,” although he noted that Germany and Poland are doing better, and China is becoming an export market as it seeks out more value-added merchandise. “It’s important that the American market is good, not just because the economic situation is better, but the market is evolving. Brands are taking into account not just price, but are considering other criteria in their sourcing strategy. That’s something that European companies need to do, as well.”

Sandrine Benard, executive vice president at Solstiss USA, said she was getting strong reaction to “experimental lace,” such as color contrasting, layered transparency, shiny finishes and floral and geometric patterns. Benard said, “The energy in the U.S. is very good. In France, the atmosphere is not very positive.”

At Liberty Art Fabrics, key account executive Michelle Lora said buyers were attracted to new looks such as printed denim and sequined silks. Lora said Liberty will be launching women’s scarves and men’s and children’s apparel for spring 2014 in the U.S.