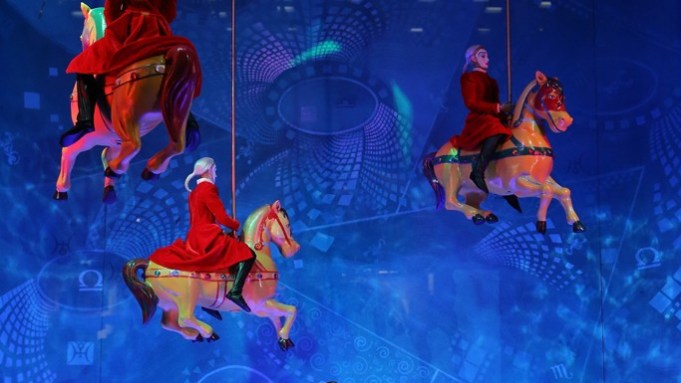 NEW YORK — Windows from the traditional to the avant-garde will be evident in stores this season.

Lord & Taylor celebrated its 75th anniversary of showcasing mechanical holiday windows on Tuesday with a performance by Megan Hilty, star of NBC’s “Smash,” and the Young People’s Chorus of New York City performing on Fifth Avenue in front of the flagship. Hilty, who said “Smash” will return with a two-hour episode on Feb. 5, performed two traditional Christmas songs. She said she’s also been putting the finishing touches on a new album due out in March that will include half cover tunes and half original material, doing cartoon voice-overs and prepping for a holiday concert with the National Symphony Orchestra over Thanksgiving weekend. “I don’t do well with down time,” she said.

Liz Rodbell, L&T’s chief merchant, said the windows this year “celebrate tradition around the world, from New York to Asia to the Alps.” They tell a story of what Santa does on his day off, traveling around the world to discover holiday traditions around the globe.

The avant-garde was represented on Tuesday when Bloomingdale’s 59th Street flagship unveiled its holiday windows with a little help from Cirque du Soleil, whose upcoming 3-D film spectacular, “Cirque du Soleil: Worlds Away,” from Paramount, provided the inspiration. In one window, men with jellyfishlike tentacles bounce up and down, while in another, a man and woman dance through the air supported by long white ribbons. “Bloomingdale’s is about what’s new, what’s of the moment, what’s very special and what’s theater. Nothing is more theater than Cirque du Soleil,” said Bloomingdale’s chairman and chief executive officer Michael Gould.

On Thursday evening, Macy’s revealed its holiday windows, but not before a performance by Taylor Richardson, who played Annie in “Yes, Virginia: The Musical.” Essential Voices USA, under the direction of Judith Clurman, provide an extra dose of holiday cheer. “Elf” star Wayne Knight, along with eight-year old Aaron Juarez, a Make-a-Wish kid from Arizona, who was a special decorating assistant for this year’s windows, flipped the switch. One of the windows is themed “Make-a-Wish,” with videos of children whose wishes were granted.

Saks Fifth Avenue and Bergdorf Goodman are raising the curtains on their windows on Monday, but gave WWD a preview.

Saks will unveil its windows with a performance by the American Ballet Theatre dancers. A show on Monday will use a six-projector system to bring to life the story of “The Snowflake & The Yeti,” with the technology accurately mapping the landmark building’s details and creating a 3-D projection that appears to change its features. The windows revolve around children making it snow using 14 snow globes and a kaleidoscope window with an interactive elements that will turn the videos into snowflakes.

Bergorf’s holiday windows, dubbed “BG Follies of 2012,” were inspired by the Jazz Age. The retailer created sumptuous Art Deco theaters where Ziegfeld Follies dancers could parade up and down the staircases.