NYC Stores Board Up and Take Precautions Before Election

The Macy's and Bloomingdale's flagships are among the stores that have been boarded up in New York City.

By Lisa Lockwood
with contributions from Rosemary Feitelberg
on November 1, 2020

Pedestrians walk past the boarded-up windows of Saks' Fifth Avenue flagship in New York on Saturday.

Stores in New York City have been boarded up and are taking extra precautions in preparation for potential unrest in the days surrounding Tuesday’s presidential election.

Macy’s boarded up its Herald Square flagship windows on Friday, and the Bloomingdale’s flagship on Lexington Avenue and 59th Street was boarded up on Saturday. Saks Fifth Avenue, as well, has boarded up its windows. All are still operating regular business hours.

Tiffany, Louis Vuitton, Dior, and Moncler have been boarded up in SoHo, and one source said many stores in the neighborhood are in the process of doing so. Aerie and American Eagle on Lexington Avenue and 56th Street also had plywood facades on Saturday. Both were temporarily closed on Sunday. Guess, at 575 Fifth Avenue, is also boarded up, but open for business, as was its SoHo store at 537 Broadway, which has gates.

A spot-check on Columbus Avenue showed most of the stores are not covered in plywood, but J. Jill and West Elm on the Upper West Side have boards.

Nordstrom’s main store has frosted panes hiding the merchandise. The Plaza Hotel has partial boarding, as does Bergdorf Goodman. On Fifth Avenue, the NBA store, Vans, Best Buy, BCBG, Five Below, Sunglass Hut are all boarded up. The Timberland stores are boarded up in Herald Square and on Fifth Avenue, as is the Empire State Building. 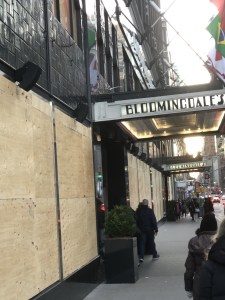 Bloomingdale’s boarded up its New York City flagship on Saturday.

“Out of an abundance of caution, like many businesses, we are implementing additional security measures at certain locations in the event of civil unrest due to the current election. This could include boarding or additional security personnel. As always, the safety of our customers, associates and communities, as well as the protection of our physical assets, is of utmost important,” said a spokesperson for Saks.

Certain locations, including the New York flagship, will have shortened hours, closing at 5 p.m. on Election Day.

A Macy’s spokeswoman said, “Our windows at Macy’s Herald Square were previously scheduled to be dark this week in set-up for our annual holiday displays. Out of an abundance of caution, we are implementing additional security measures at several of our stores.” 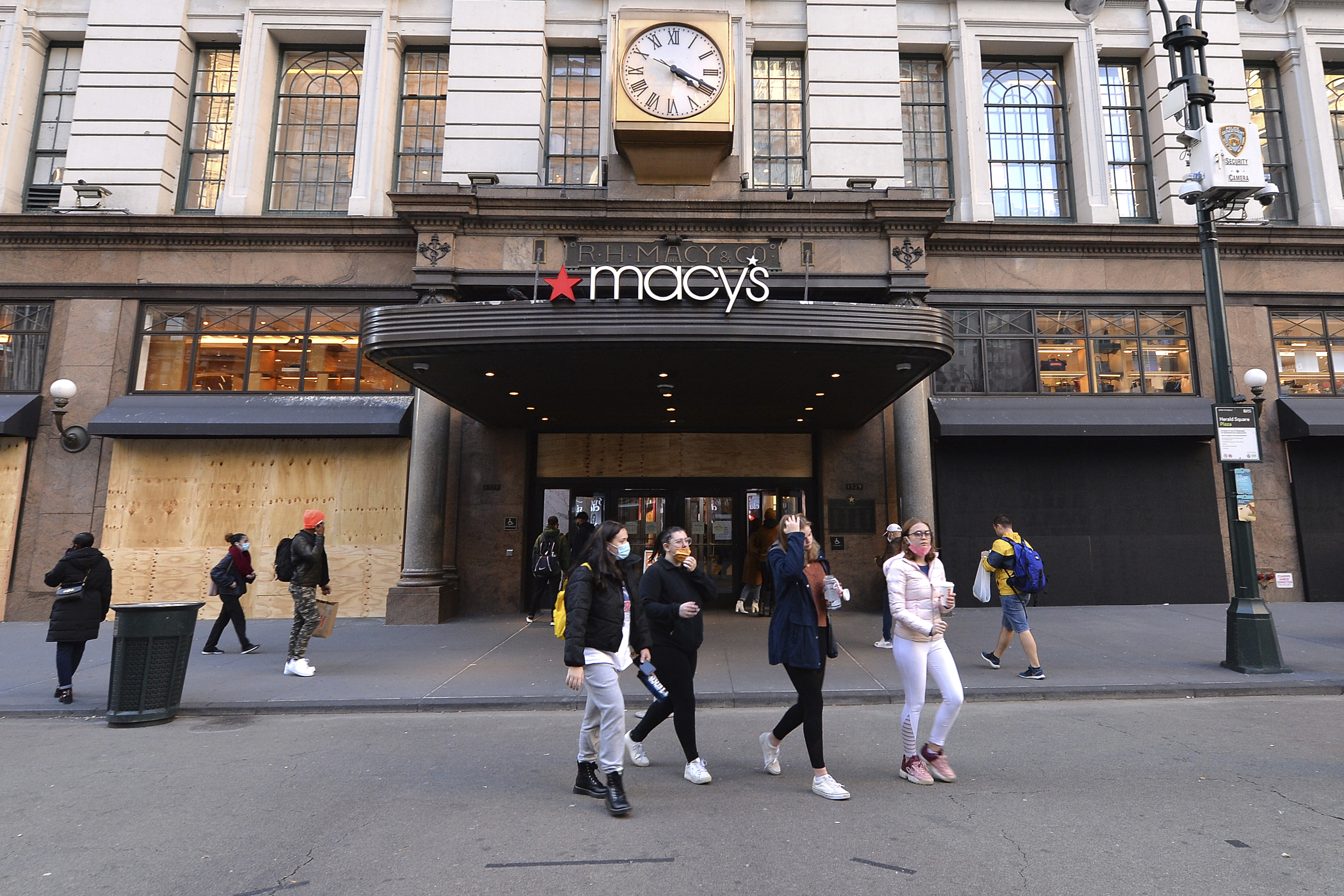 Macy’s flagship in New York boarded up its windows on Friday.  Sipa USA via AP

A spokesman for Tiffany said Sunday, “While we intend to remain open where possible, out of an abundance of caution the windows of select stores in key cities will be boarded in anticipation of potential election-related activity.”

Published reports have said Nordstrom plans to board up some of its 350 stores.

A Nordstrom spokeswoman said Sunday, “Our teams are monitoring the situation in order to be prepared for any activities that might take place across the U.S. on Nov. 3 and potentially in the days following. We’re taking steps to help keep our customers safe and our stores secure. We’ll also be closing each of our U.S stores early, at 5 p.m. local time, to help ensure our customers and store employees can get home easily and make it to the polls if they need to. We plan to reopen our doors as normal on Nov. 4.“

As the presidential election approaches, the NYPD presence is also expected to be stepped up with stores warned to take precautions despite the absence of any real threats.

On his weekly WNYC broadcast, Mayor Bill de Blasio said the city is going to be prepared for “prolonged protests” and has been discussing safety protocols.

“None of us has a crystal ball to know what the result will be, but we’ve sure been given enough reason to be concerned by the president of the United States suggesting he will not abide by the election results and that’s absolutely sickening and unprecedented,” the mayor said.

“It’s too early to tell what [the week] is going to look like,” added de Blasio. He said that if anything turns violent, the city will move to stop it immediately. He said peaceful protests will be respected and facilitated, regardless of ideology.

Last week, protests took place after Walter Wallace Jr., a Black man with mental health issues who was carrying a knife, was killed by police in West Philadelphia. That resulted in looting and clashes with the police in the city. As a result, Walmart said last week it was removing all its firearms and ammunition from its sales floors across the U.S., but then on Friday reversed its decision and returned the guns to the sales floor, deciding the incidents of unrest were “geographically isolated.”

The killing of George Floyd last May sparked generally peaceful protests across the country, although in isolated instances these evolved into clashes with police. Even as the protests were peaceful, there also were a few instances of shattered storefront windows and thefts in some of the nation’s best-known shopping districts from Rodeo Drive in Los Angeles to SoHo in New York.

As reported, in New York City, some retailers are being reminded by their local Business Improvement Districts to remove all merchandise from street view, leave the lights on at night, lock all doors and repair any faulty video cameras. As basic as this may seem, some stores in NoHo had merchandise stolen and/or property damaged due to some of these oversights in late May and early June, said NoHo BID’s leader Cordelia Persen last month.

“It had nothing to do with protesters. The stuff that happened in May and June was robbery, high-stakes robbery, taking advantage of a bad situation. That’s what people are worried about in the future,” said Persen last month. “Everybody has the fear that there’s not going to be a result [from the election] for a very long time. That could easily lead to a lot of unrest, so we’re just playing it safe. It’s only so stores do what they have to do so that they’re prepared,” she added.