For the first time in a while, there was color, tailoring and strong accessories at NYFW for spring 2019, sparking retailers' optimism for the season. 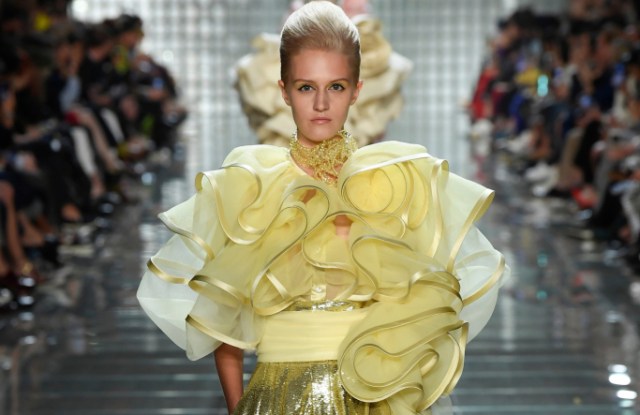 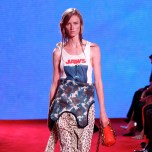 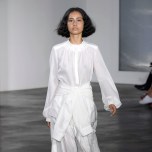 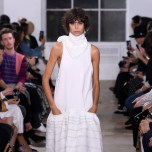 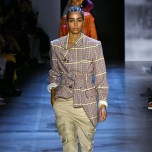 Spring 2019 could be the season that stores have been hoping for as a strong economy, record low unemployment and the kind of fashion retailers dream about could further spur consumers to shop for clothes.

The collections seen at New York Fashion Week were full of color, tailoring, embellishment and newness, which may at last enable fashion to shake off what has been seen as a case of the “blahs,” and continue to fuel retailers’ optimism after a strong first half and early fall. Spring 2019 also might mark a shift in style, as retailers said they are beginning to see designers move away from the never-ending streetwear toward more romantic and feminine looks.

They’re also hopeful that women will make room in their closets for heels, which reasserted themselves after years of a sneaker hegemony.

“With the amount of beautiful color and femininity and romanticism, customers are going to be enthusiastic about these clothes when they arrive in stores,” said Ken Downing, fashion director and senior vice president of Neiman Marcus. “There was a lot of white and a lot of black on the runways, but even when we saw black, it wasn’t dour, there was a lot of detail and it felt fresh, not dismal and sad. It was like a great ensemble you’d want to wear because it was so chic and had interesting hand-crafted details and embellishment.

“The continuation of tailoring and pantsuits look really good,” Downing continued. “We’re already seeing customers respond to tailoring this fall. The jacket has returned as the beginning of the wardrobe building block. She’s buying blazers and embracing pantsuits. It wasn’t just a moment [last season] that designers are walking away from. It’s a real tailoring moment.

“There were a lot of messages,” Downing said. “In addition to romanticism and a real sweetness, nomadic, artisanal, crafted and the American West, Peru or South America or Eastern countries, which brought a travel viewpoint. Also, a late Eighties spirit with hip-hop and rap surfaced.”

Another boon for retailers is the fact that there were a lot of accessories on runways, from big, oversize totes and the return of the baguette bag to straw or felt hats and shoes with acrylic wedges. “There was a real spirit of joy to the collections,” Downing said. “Fringe returned. It continued to permeate in many collections and swayed from handbags and dresses and skirts.”

Not everyone was so sanguine. “Yes, Proenza Schouler and Rodarte came back to New York City, but brands such as The Row, Rosie Assoulin and others showed both their resort and spring collections in June, so there was definitely the feeling that some great brands were missing,” said Kelly Golden, owner of Neapolitan. “I hope more brands will get on board and show twice a year only. It would make it easier for the designers and the buyers. Overall, there’s too much stuff out there that all looks the same. I don’t think the needle was moved by New York.”

“Moving the needle seems like a heroic feat. The way fashion is today, I don’t think the needle gets moved that dramatically. The most important thing is that it’s great for American designers such as Rodarte and Proenza Schouler to show in New York during fashion week and on the [official] calendar. The more designers that do that, the more important New York Fashion Week can be, and will be,” said Jeffrey Kalinsky, designer fashion director of Nordstrom, adding, “I wish Joseph Altuzarra would come back, and it would be nice if Alexander Wang was back on the official calendar. But it’s important that they do what they think is best for their businesses.”

Kalinsky, whose favorite collections included Brandon Maxwell, Calvin Klein and Marc Jacobs, said “there was so much color on all the runways. I always think that’s good. Our customer really responds to color, particularly in the spring and summer. I’m in love with Christian Cowan; he’s definitely a star on the rise.”

“I was so happy to see a ton of bold colors on the runway, particularly yellow in all its various hues,” said Intermix chief merchant Silvia Merati. “Cargo pants are also having a major moment, and Phillip Lim’s felt chic and modern. Jonathan Simkhai showed them in a more romantic and tailored way.”

Merati, whose favorite collections included Simkhai, Tibi and Zimmerman, praised Simkhai for perfecting “the ethereal silhouette of his dresses this season,” the pastel color palette at Tibi and patchwork pieces from Zimmermann that “felt like a cool, novel continuation of the Western trend we saw from fall.”

“I am loving the asymmetric styles — in anything — a dress, skirt, or top,” Merati added. “Brandon Maxwell and Monse both did asymmetric dresses in really beautiful and different ways. There were also a ton of long dresses on the runway, especially in flowy silhouettes. I would add that to my must-have list for spring.”

Retailers seemed eager to see fashion distance itself from street style, which has upended luxury retail with drops and incessant hype. Kelly Wong, director of fashion at Lane Crawford, was pleased by the femininity seen on many runways. “I don’t like the streetwear oversized trend. Let’s go back to clothing that shows off the uniqueness of every woman’s figure. Streetwear and logos definitely had their fair share of fun in the sun,” Wong said. “This fashion week, we’re seeing a comeback of quietly feminine and sophisticated looks in lace, cotton voiles, chiffons and silks.

“Many of the styles came down the runway in strappy sandals or heels, which replaced sneakers,” Wong said. “A good example of this was Monse, with everything looking clean and soft. Self Portrait amped up the dial on feminine dresses with new prints and fabrications.”

“It’s been a very interesting week,” said Roopal Patel, fashion director of Saks Fifth Avenue. “It feels like we’re in a period of transition. There’s been a lot of shifts on the calendar.

“The highlight of fashion week was Ralph Lauren,” Patel said. “It was a testament to the city and what New York Fashion Week has given to Ralph Lauren and his career, and that he gave back in such a big way.”

While Lauren was a hard act to follow, Patel managed to find other highlights, including Oscar de la Renta’s Laura Kim and Fernando Garcia, whose collection she described as very fresh. She also cited Gabriela Hearst, Tibi and Marc Jacobs.

“We loved having Rodarte and Proenza Schouler back in New York and stretching the reach of American design talent,” said Linda Fargo, senior vice president of the fashion office and director of women’s fashion and store presentation at Bergdorf Goodman. “Ralph Lauren was certainly the experience of the week and maybe a lifetime.”

Fargo cited Brandon Maxwell‘s tribute to his home state of Texas as a feel-good moment, praised Kim and Garcia’s de la Renta collection and said Hearst hit her stride. She took notice of the numerous color stories, expressions of feminine romanticism, far and away themes and prints, and just plain sexy looks.

“I liked the intimacy of seeing clothes in smaller spaces,” Larroude said. “I loved Rebecca de Ravenel’s presentation, which was set at the Gramercy Park Hotel terrace. Sies Marjan at the Lever House was incredible. The models walking outside in the rain with umbrellas gave the city a little glimpse of fashion week.”

“The collections that showed in New York were relatively independent of a dominant trend and marched to the beat of their own drum,” said Elizabeth von der Goltz, global buying director at Net-a-porter, listing her favorite collections as de la Renta, Hearst, Ulla Johnson, Tibi, Nanushka and Staud and Khaite. “One unifying element was the sense of optimism with cheerful bright colors, happy prints and glamorous party dressing.”

Sarah Easley, founder of MaisonMarche, said, “I enjoyed the Nineties pencil skirt and chic silhouettes at Tom Ford, especially the lace peekaboo at the hem. My clientele look for more ease, and so do I. Although I’m really sick of fashion sneakers — not that much ease. Baja East got the balance right with cool California pieces. Batsheva is its own category with retro ruffles and lamé that give the clothes an almost costume-y effect, but Batsheva styles them in an enviable tough, urban mood.”

“The most anticipated show of New York Fashion Week was Calvin Klein and it was fantastic — the ‘Jaws’ tank is a must, along with the tie-dye T-shirt, Hawaiian-print jacket cutout back boots,” said Ida Petersson, women’s wear buying director at Browns. “That pink suit from Tibi was killer, and on the accessory front, the accordion bag from Staud. I’m beyond obsessed with tie-dye and surfer-culture references, but I’m a bit bored with seeing hoodies and T-shirts on the runway.”

Petersson said Browns’ budget is up. “We’re continuing to see very healthy growth, so our open-to-buys reflect this.” Mario Grauso, president of Holt Renfrew, cited the Row, Gabriela Hearst and Khaite as his favorite collections. He believes consumers will respond to monochromatic dressing in shades of cream, navy and muted pastel pinks from brands such as Zimmermann and 3.1 Phillip Lim; tailored shirting with voluminous sleeves from Gabriela Hearst, and sport and technical fabrications such as Calvin Klein’s tailored scuba gear. Holt Renfrew clients will need an oversize Margaux weekend bag from the Row and a Calvin Klein “Jaws” T-shirt.

Beth Buccini, owner of Kirna Zabete, found a lot to love in the collections of Carolina Herrera, Adam Lippes, Brandon Maxwell, Sies Marjan and Monse, and trends such as pink, neutral palettes, primary colors and stripes; belted trench coats, and spring boots. However, she nixed the color yellow, which “never sells because it’s harsh on everyone’s skin.” Buccini advised designers to hold presentations “unless you have the budget for a big show. It’s far preferable to see the clothing up close and not be held hostage trying to get in and out of a show and waiting for it to start.”

Min addition to collections by Proenza Schouler, the Row, Alexander Wang and Sies Marjan, she was enthusiastic about Talia von Furstenberg, “the talented granddaughter of Diane von Furstenberg, who’s created her first capsule collection of 10 pieces that modernize the wrap dress” popularized by the elder von Furstenberg.

Lauren Wolfenden, fashion director, women’s ready-to-wear at Macy’s, said new uses for eyelet, patchwork and natural materials as well as crochet knits were among the best trends on the catwalks. “Large scale tie-dye looks amazing in the new brights. For glammed up looks, we love liquid shine in vibrant colors along with metallic gold,” added Wolfenden, whose favorite collections  were Zimmerman, Tory Burch, Ulla Johnson and Coach. “Must-have items for spring/summer 2019 include track separates, which look really fresh, the volume sleeve, be it poet or puff shoulders and the utility jumpsuit, which looks strong in neutral colors.”.

Nicole Fischelis, a consultant and former group vice president and fashion director at Macy’s, praised Marc Jacobs for his collection’s workmanship, beauty of the materials and fusion of color and shine. “Anna Sui invited all the craftspeople and artisans and held a bazaar before and after her show,” Fischelis said. “Her vision also mixed together fabric, shine, print and layering.”

The unisex or genderless fashion trend was more prominent this past season, Fischelis said. “Opening Ceremony’s show with drag queen models gave recognition to a community that is marginalized,” she said. “They shouldn’t be, because they’re part of the fashion industry and they add fantasy. It was unexpected, but courageous of Opening Ceremony. We’re in a moment where we’re talking about accepting diversity.”