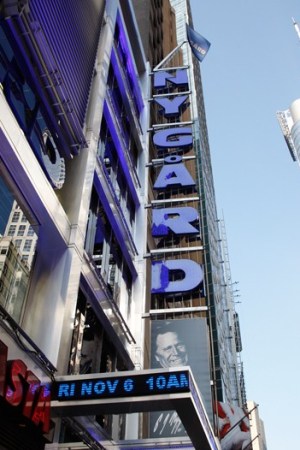 NEW YORK — Peter Nygård’s name is writ large on Broadway between 40th and 41st Streets — the Canadian chief executive officer of Nygård International wants the city to know he has arrived.

That statement features the letters of his name in blue lights rising seven stories high on the facade of 1435 Broadway, Nygård’s new world headquarters opening in March. The building will house offices, design studios, showrooms and entertainment venues.

His name is also spelled out in blue on the front of his new flagship at 1431 Broadway, a few steps from the headquarters. A blue ticker surrounding the perimeter of the 2,500-square-foot store alerts customers to the grand opening on Friday. Inside, 26 screens play fashion show loops and explain the Nygård collections. Small screens face consumers, entertaining them as they complete transactions at the cash wrap. A large video wall shows photos of Nygård with VIP customers such as Pamela Anderson. All those screens are dwarfed by a 42-by-86-inch monitor that will broadcast fashion shows to shoppers. Even larger is the 7-by-14-foot screen outside the headquarters.

Nygård’s company has an in-house video production unit that films fashion shows, interviews and other entertainment for the stores.

He expects the store to do $1,000 a square foot in sales. Undeterred by the recession, Nygård said he wouldn’t let a drop in consumer confidence stop him. Business is up 25 percent over last year. “We’re approaching the $1 billion mark,” he said.

Prices range from $58 for a blouse in the Bianca Nygård petite line to $458 for a suede and leather jacket from Nygård. The designer has no illusions of being a luxury brand. “We are really a mass merchant,” he said. “We sell volume.”

Nygård sells to Dillard’s, Macy’s, Sears and Hudson’s Bay, among other retailers.

He’s also opening Nygård Fashion Parks in Canada, 14,000-square-foot stores that sell the entire range of labels from moderate to higher-priced. “People cross over,” said Nygård, noting that a unit opened in Kenaston, Winnipeg. “We’re trading our customers up to the next label.”

The stores also offer DFX, or Designer Fashion Exchange, merchandise, discounted 50 to 75 percent. “We don’t sell to TJ Maxx,” Nygård said. “We control our product. We have off-price stores in locations that don’t hurt us.” The New York flagship will have a DFX section where merchandise will be discounted after a certain number of weeks.

Nygård said headquarters employees will work closely with store staff. “This will become a lab to fine-tune and test. We’ll do information gathering and fine-tuning on products.”

He calls the flagship concept the “Nygård Future Store” for its Space Age design achieved with new plastics and other building materials. The store has a lounge with seating and computers to occupy significant others as women shop and also has a waterfall in the center of the room. Above the waterfall are blue ceramic halide lamps and blue plastic circular forms Nygård describes as “the rings of Saturn.”

The circular cash wrap has white counters and blue bases with built-in lights. Small blue lights are also embedded in the floor. The walls and ceiling are bathed with LED light that produces a shade of what Nygård called “white blue.” He said he worked with lighting experts in the Orient to develop the color.

Nygård is introducing chrome mannequins, futuristic-looking models that rotate 360 degrees and that will inhabit a huge pedestal.

On Tuesday, “live” mannequins were practicing for a fashion show that will be presented at the opening party on Thursday night. Marching down Broadway from 1435 to 1431, one group, dressed in embroidered jackets, leggings and high-heeled boots, wore headpieces decorated with sequins and feathers that looked as if they could have belonged to a group of Las Vegas showgirls. Nygård said the headpieces with their vertical feather crowns were meant to invoke the Empire State Building. Other models with silver-painted faces were meant to emulate the chrome mannequins.

But Nygård is not just about pretty clothes and custom lighting. “We have tremendous inventory control systems,” he said.

While the flagship is just south of Times Square proper, Nygård said, “We treat Broadway as an outdoor mall. It will be the biggest outdoor mall. We’re expecting this street to become a big shopping street.

“I may open more stores in New York,” he said. “If we see this store getting to $1,000 per square foot, if it works, New York is the perfect location.” He avoids malls, however, because “the malls already have my customers in department stores.”