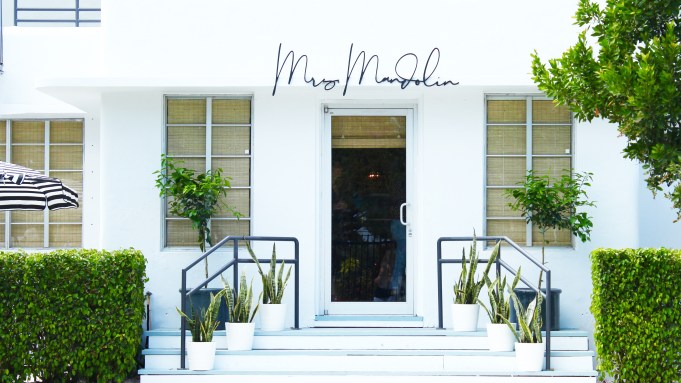 As Miami malls and street retail districts vie for the spotlight with fancy facades, first-in-Florida doors and umpteen events, an under-the-radar residential area has quietly emerged. Locals love Buena Vista, Fla., a leafy, historic neighborhood between the Miami Design District and Little Haiti, because it reminds them of South Beach’s and Coconut Grove’s bohemian heydays. Tourists crave its sense of discovery, while Millennials here, raised on fast-fashion and big-box stores, are curious about the old-fashioned, mom-and-pop model.

Mandolin Aegean Bistro, the anchor that laid much of the groundwork for Buena Vista’s gentrification, opened Mrs. Mandolin, a lifestyle store and café, a block south at 4218 Northeast Second Avenue in March. The concept began a couple of years ago as a culinary-focused bakaliko, a Greek bodega or deli, in the restaurant’s rear annex for diners to re-create the Mediterranean-inspired destination’s dishes and tabletops at home. After consistently selling out of the house’s bottled hot sauce and imported Cretan honey, husband-and-wife owners Ahmet Erkaya and Anastasia Koutsioukis leased the nearby 1,500-square-foot property with a secret courtyard and original Art Deco facade.

“Fashion stores normally add restaurants rather than the other way around, but lifestyle plays a huge part in how we connect to people,” said Koutsioukis, a Toronto native who spent a decade at fashion and beauty brands in New York and wanted to work with those categories again.

The majority of her buy for women’s clothing and accessories, homewares and pantry items comes from countries surrounding the Mediterranean. A big believer in brick-and-mortar, she had always envisioned expanding into retail as an extension of the couple’s home. (They live within walking distance of the restaurant and entertain frequently.)

“It feels like entering a clubhouse or someone’s beach house,” she said, tickled, but not surprised when men linger for hours with their laptops in the tiny front café or hold meetings on plush sofas amid the din of the mainly female clientele’s chatter. “We’ll add a small selection of men’s fashions — swim trunks, the perfect espadrille — in season.”

Koutsioukis initially sourced and noted items during her travels abroad when Mandolin operated now defunct outposts at Soho House locations in London’s Shoreditch, Istanbul and Berlin. Through the original, beloved restaurant, where she became known as Mrs. Mandolin, she also met a constant flow of international and local designers to carry and collaborate with eventually.

“I’ve made most of my ‘friends of Mandolin’ around the table. It’s our ethos,” she said, of supporting the slow food and slow fashion movements. “People want to know where their things come from.”

She’s particularly drawn to women-helmed businesses like Gee Beauty, which further shares her Toronto-Miami connection and natural philosophy. They collaborated on the exclusive Endless Summer Kit with six essentials (Cheek Color Stick, Precision Brow Pencil) from Gee Beauty’s namesake cosmetics line neatly packaged in a travel bag. A light packer, she swears by their efficiency. Other collaborations include a roasted coffee blend, striped handbag in the colors of the Greek flag and jewelry, such as Colombian designer Pili Restrepo’s Orbita enamel earrings in an exclusive Aegean blue.

“I like fine jewelry that holds meaning but is wearable,” said Koutsioukis, citing her neighbor Soledad Lowe as another line for everyday heirlooms that aren’t too precious.

Koutsioukis’ signature flowy frocks and effortless taste translate to the store’s resort-driven collections. Many brands from Innika Choo to Miné Mediterranean have little to no representation on Miami racks filled with body-con styles. Asked how relaxed silhouettes in gauzy fabrics paired with flats, such as Valia Gabriel’s sandals handmade in Greece, will fly here, Koutsioukis responded that outsiders tend to underestimate the market.

“I know from my diners that they’re well-traveled and savvy,” she said, of offering designers often available only through luxury e-tail. “They may see a Carrie Forbes’ sandal online but prefer to see it in person and try it on.”

Apparently, not everyone in Miami wants in-your-face swimsuits either. She bucks the trend with Bower Swimwear’s minimal cuts in quiet colors and hopes to find other little lines that aren’t oversaturated here like Cesta Collective’s basket bags woven in Africa. Another summer project involves activating the courtyard’s happy hour for wine, olives and cheese plates, in addition to the café’s spanakopita and mini olive oil cakes with rosewater glaze and chopped pistachios.

“More than a retail experience, Mrs. Mandolin is an extension of our hospitality brand,” said Koutsioukis, who makes reservations for shoppers to dine at the restaurant and already notices the back-and-forth traffic between the businesses. “It allows us to go to the next level of service.”

Another couple unveiled Upper Buena Vista, a “Swiss Family Robinson” rendition of a retail complex, at 184 Northeast 50th Terrace and Northeast Second Avenue in early 2018. Michal Aviv and David Lahmy moved from Israel during the recession and went on a real estate shopping spree. On one of their scouting trips, they fell in love at first sight with the 51,000-square-foot enclave’s ramshackle Mediterranean Revival buildings and old, towering trees. It took four years and three architecture firms to renovate and newly construct the six-structure compound inspired by the organic and industrial design and culture of Tel Aviv, Tulum, Tokyo and Thailand. But nature remains the core attraction.

“We don’t refer to it as a shopping center but a retail sanctuary,” said Lahmy, who inadvertently identified an advantageous niche in the retail race, just as many Miami developers use fine art.

Their concept of independent, small-scale shops, cafés and services, where people have everything including a tattoo parlor and shaved ice with tropical toppings in one place and spend the whole day, is common of Tel Aviv according to the couple. Sixteen of 20 turnkey shops are 250 square feet, ushering in micro-retail in a city that typically thinks bigger is better. The size and affordable rent, ranging from $80 to $100 per square foot, attracted neighborhood resident Angie Giles, whose brother, Steven, founded Base lifestyle boutique in Miami. She phoned her friend Sylma Cabrera to open a branch of her Pure Soul lifestyle boutiques for global, fair-trade fashions and homewares in San Juan, P.R., and Shelter Island, N.Y.

“I told her I’d found her spiritual home,” said Giles, who manages the store.

“These retailers aren’t just bringing merchandise. They’re bringing the world,” said Aviv, who already has a waiting list and is scouting for a second location in South Florida.

After a soft opening, the complex will get cranking when a night bazaar on Thursdays and Vista restaurant by a popular Italian eatery in downtown Miami launch in July. So far, Instagram and word of mouth have driven traffic.

“We’re waiting for the world to find us. But when people do find us, they come back to show their friends,” Giles said.