The retailer on Monday launched 30 items that feature images of Mickey and Minnie Mouse through the decades. 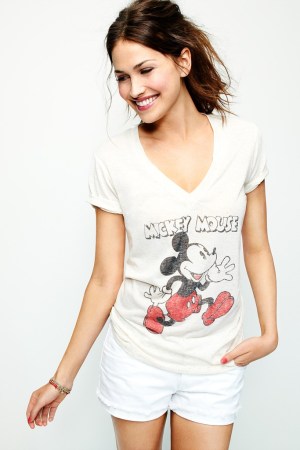 Old Navy is going back in time with Disney Consumer Products.

This story first appeared in the July 9, 2013 issue of WWD. Subscribe Today.

The retailer on Monday launched 30 items — 28 T-shirts, a canvas tote and a watch — that feature images of Mickey and Minnie Mouse through the decades, priced from $12 to $20.

Although Old Navy has had a successful relationship with Disney since the start of its licensing program about four years ago, Jodi Rosenblatt, director of sales for Disney Consumer Products, emphasized this collection lifts the partnership to another level. “The artwork looks vintage, and there is a weathered look to the fabrications. It really shows what an elevated collection can look like. It’s not your basic screen Ts,” she said.

Nick Grover, director of licensing at Old Navy, called the collection an evolution of Old Navy’s expanding licensed goods business. “When we started the business, we were trying out some properties in a few stores. We just wanted to get a taste of whether our customer was interested in buying those properties. We learned right away that it was a huge want from our consumer,” he said. “It’s been a huge growth vehicle for us, and it has become an important part of our graphics business. This year, we looked for something new that would be different for our customer.”

The Disney collection at Old Navy will be showcased in the windows of three of the retailer’s stores: two in New York and one in San Francisco. There will also be prominent in-store signage and a social media campaign to promote the collection that has already begun, with the intent to drive people hungry to collect the merchandise into stores.

Beyond Old Navy’s stores in the U.S., Disney Consumer Products and Old Navy are confident the collection will be a hit abroad. “Old Navy has done consistently well with Mickey, Minnie and Mickey and friends. It is a franchise and a property that appeals to everyone globally,” said Rosenblatt. “They have stores in Canada and [four] stores in Japan that will be carrying the merchandise. With what we know with our Japanese merchandise, the product is going to do incredible there.”