The package lands on a shopper's doorstep in a reusable Olive shipper, with nothing to throw away or recycle.

Olive, a new e-commerce platform that seeks to provide consumers with a more convenient, efficient and sustainable way to shop, launches today.

Olive was founded by Nate Faust, who previously cofounded Jet.com in 2014 before it was sold to Walmart in 2016 for $3.3 billion, the largest U.S. e-commerce acquisition at that time. Walmart closed Jet.com in May 2020.

The platform, at Shopolive.com, allows each order to be consolidated into a weekly delivery at an Olive consolidation hub, regardless of how many retailers are shopped. Consumers can create a free account, then gain access to hundreds of fashion and accessory brands, including Adidas, Anthropologie, Everlane, Ray-Ban, Goop, Free People, Hugo Boss, Sam Edelman, Stuart Weitzman, ThirdLove, Veronica Beard, Ugg Australia and Vince.

The package arrives at a shopper’s doorstep in a reusable Olive shipper, with nothing to throw away or recycle. Returns can be made with one click in the Olive app, with the shipper left on a shopper’s doorstep for pickup. The business allows carriers to deliver in bulk, which further reduce emissions, and it eliminates multiple deliveries, breaking down cardboard boxes and driving to the post office or store for returns. 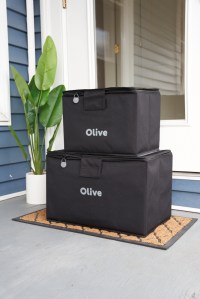 Faust said he spent the last 12 years in e-commerce, starting out at Diapers.com, cofounding Jet.com and then working as senior vice president of Walmart’s U.S. e-commerce supply chain, encompassing walmart.com, Jet.com and others.

When he left Walmart, he realized he wanted to do something with a social and more environmental impact. One night when he was taking out the trash and recycling and carrying out all these boxes, he saw that his neighbors had similar boxes and he thought to himself that that was crazy.

“After 25 years in e-commerce, there’s still so much growth yet to come, and this was the status quo delivery experience. Over 10 billion shipments a year, delivered in single-use, one-way packaging. Not only a huge environmental issue, it a major customer pain point,” Faust said.

“On a given day, UPS, FedEx, the post office deliver multiple packages. The consolidation has an even larger impact. Half the carbon emissions come from those last-mile deliveries to consumers’ homes. For the most part, it’s a single order dropped off,” he said. He added that especially in apparel, sometimes a four or five unit order can be delivered in two or three packages. With Olive, it can all come together, the customer can try it on at once, and anything they don’t like can be put back into the secure Olive two-way tote. The customer marks it in the app, leaves it on their doorstep or with the doorman, and the postman picks it up.

When questioned whether women actually buy five or six different apparel items every week from various retailers, he said, “We have a lot of transactional data that we’ve used to model out the business. There is a cohort of shoppers out there that are very heavy, multiretailer shoppers in the course of a single week. The model and delivery experience and the ease of returns still holds true and our economics still works as well even if you place a single order, if it’s from one of these premium brands with higher price point items, which is who we’re starting out with.”

He said that in New York, for example, there will be deliveries on Tuesday/Friday or Wednesday/Saturday, depending on the ZIP code. Outside of New York City, they will deliver on a day of one’s choosing. The most popular day is Saturday. Regardless of when a customer orders something, it will come delivered together on a particular day. Customers need to schedule a return of the tote, even if they keep everything.

Olive is starting out with apparel and accessories, and will add beauty over the next few months.

Over the long-term, the company plans to support additional categories. “We’re focusing on apparel, it’s the most disparate category where consumers shop across lots of different sites, and enables the biggest benefit to have universal tracking across all these orders.” Also he pointed out from an environmental and returns perspectives (apparel has the highest rates of return), it becomes a key selling point to use it.

Olive is being launched on the two coasts, covering a footprint of 100 million people, or a one-third of the U.S. population. It will launch at two facilities, one in Southern California and one in northern New Jersey. The company will expand to other parts of the country with additional facilities in the future.

There is no subscription fee, and it’s free to the customer. Olive receives an average of a 10 percent commission on every sale from the retailers it works with.

“From an integration perspective, there’s no work for the brand to come on to the platform. All the integration is done by Olive through its affiliates and desktop tools and apps. It’s very compelling to retailers,” Faust said.

Of course, there remains the issue that all the packages are still initially shipped to the consolidation hub.

Faust said once they have enough volume going to and from a retailer, he will introduce their shippers into the flow to get the sustainability benefits.

In order to launch this with 100-plus retailers, on the inbound side, the retailers ship and pick and pack their packages and they get delivered to Olive’s consolidation centers, where they remove the outer packages, and consolidate it into a tote and deliver it to a customer.  If an item comes back, Olive puts it back in consumer packages. Eventually there will be an environmental benefit.

“Once we have critical mass coming from a retailer, we provide the totes for free directly to their operations, so everything can flow through the supply chain,” he said.  When a retailer ships Olive the package, they recycle the original packages. They leave the clear poly bags on the clothing so they don’t have to touch it. They ask the consumer to send back the clear poly bag so it can be recycled appropriately. They’re working with local recycling places.

There are three different size totes and when a package arrives at the consolidation center, Olive knows who it belongs to because each customer has a unique number that’s on the package. The customer gets an email notifying them about their complete order information.

Faust, who is the founder, is working with a team of 13 people whom he has worked with previously at Diapers.com, Amazon, Jet.com and Walmart.

In an effort to acquire customers, he said he is working with his retail partners to send out telemarketing emails to introduce Olive. He is also doing traditional acquisition marketing in digital and physical channels.

Asked where he came up with the name Olive, Faust replied, “The mission of the company is all about sustainability, we want the brand to be one people love and use. We want the brand to have a subtle reference to the green mission. Olive, I felt, sounded best. Shop Olive, had a nice ring to it.”

The Walmart Formula and Its E-commerce Push