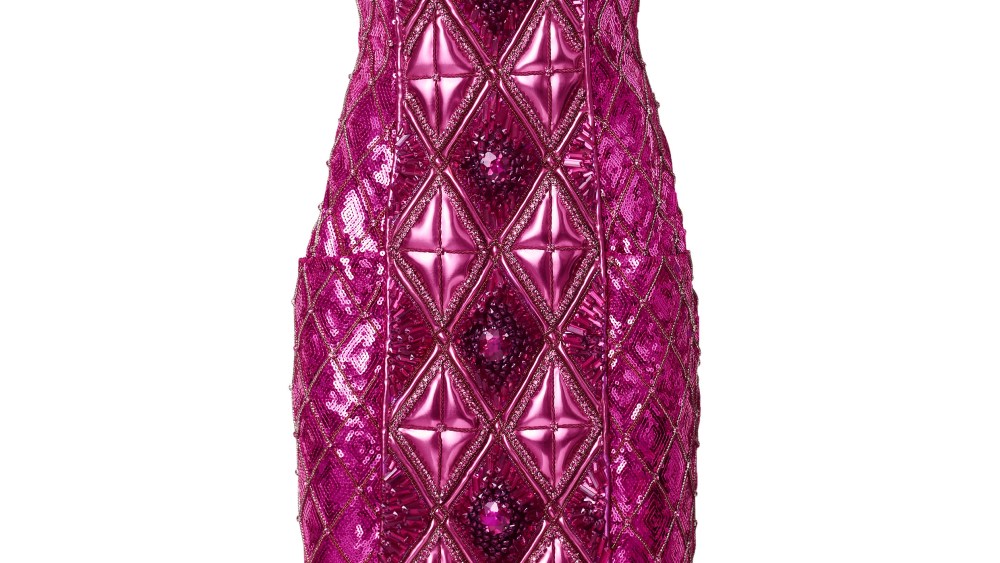 NEW YORK — “Everything happens so fast,” said Olivier Rousteing, creative director of Balmain Paris. “My Paris runway show was a week ago. I’m really excited about the next men’s wear show and pre-fall.”

But first, Rousteing has the runway show on Tuesday of Balmain x H&M, the collection that’s a collaboration between the Parisian house and the Swedish fast-fashion giant.

Rousteing could hardly contain his enthusiasm. “Pushing the couture feeling was not easy,” he said on Friday, sitting in an office at H&M’s headquarters here. “They made it happen in a really beautiful way.”

Rousteing was here to line up his soldiers for the runway show, which will take place at 23 Wall Street. It will surprise no one who keeps abreast of fashion developments that Rousteing’s besties Kendall Jenner, Gigi Hadid and Jourdan Dunn will be walking, along with other “supermodels,” a spokesman for the Paris house said.

It’s worth mentioning that Balmain will be the second Parisian house to grab the city’s attention, following Riccardo Tisci’s Givenchy tour de force during fashion week here on Sept. 11.

All around Rousteing, heavily beaded apparel from the collection hung from rolling racks, including a black-and-white dress with 250,000 hand-sewn beads, priced at 499 euros, or $570 at current exchange. “It’s the most expensive piece,” said Ann-Sofie Johansson, H&M’s creative adviser, “but it’s a real value for the money.”

The collection will be available online and in 250 stores in 61 countries starting on Nov. 5.

Johansson said that compared to previous collaborations, “this collection is a little bit more expensive. The price of a T-shirt with the Balmain logo is 29.99 euros [or $34 at current exchange]. It’s important to have that range.”

There were velvet jackets decorated with pearls, a green sequin and beaded dress and dresses with deep V-necklines, so short they looked like shirts.

“He wanted everything to be super short,” Johansson said. “We want short as well, but you have to be able to move in the dress.”

The collection features feminine fabrics such as silk and velvet — Balmain staples; sharply tailored jackets; harem pants, and bold details such as cord and metallic thread, seen in a velvet dress covered in ropelike patterns.

Men’s wear was as embellished as women’s, with a black jacket decorated with lions embroidered in gold thread, beaded jackets, white tuxedo jackets and jackets made from heavy leather with exaggerated shoulders.

“I believe in strong women,” Rousteing said, “and women with all shapes. We have to get away from the real skinny girls.”

In terms of the accessories, there is everything from headphones to beanies to high suede boots for women and black leather biker’s boots for men. Also, gladiator sandals, belts, beaded clutches, handbags in red or yellow suede with black outlines and gold handles, and backpacks.

In addition, Balmain and H&M created a limited-edition fragrance. The eau de perfume, which has top notes of tonka bean and white jasmine petal, will go on sale in select stores worldwide on Dec. 3.

Johansson said Balmain was on the retailer’s wish list of designers. When H&M approached the house about a collaboration, it immediately agreed. “We wanted to have their [Balmain’s] signature style,” she said. “Olivier presented the idea of making a collection for us with the iconic pieces he’s made for Balmain over the years. We had the same idea.

“We didn’t have any problems. It was only that he wanted to make a really big collection,” she added. We had to take it down a bit. He has so many ideas. He’s a lot of fun. He’s a team player.”

“When you do a collaboration with H&M it’s a celebration of a vision and an aesthetic,” Rousteing said. “They embrace it. It’s like an honor.”

Rousteing was pleased to be offering his fans — with whom he has a running dialogue at #BalmainArmy — the chance to buy a less expensive version of his designs. “You can give people who can’t afford it a chance to buy it,” he said. “It’s amazing to touch another range of customers and another range of ages.”

He added that he did it “without compromising.”

Johansson said H&M was pleased, too. “We hadn’t done hand-beading like that before,” she said. “We’re super happy and surprised by how good the production can be. Some of the pieces are pieces of art.”

The designer said he learned a lot from working with H&M, about fabric technology, and also “I learned from them about different kinds of shapes and silhouettes. They explained oversize and high-waisted styles, whereas my customer goes for skinny. With luxury you don’t touch so many young people.”

In terms of craftsmanship, H&M introduced Rousteing to a different way of embroidering.

“Balmain is such a strong universe,” he said. “It’s so rich and flamboyant.” He said he achieved that richness with H&M, which he called, “my couture for the high street.”

“I’m pushing to put the prices down at Balmain,” he added. “I started as creative director almost five years ago. Now that I’m pretty well-established, I can push. Before I was the Balmain baby and now Balmain is my baby.”

H&M and Balmain are capitalizing on Rousteing’s huge social media following with #HMBalmaination.

“We like the way Olivier communicates with his fans,” Johansson said. “He’s kind of the new generation of designer.”

Asked whether runway shows are becoming passé, Rousteing said, “I think they’re still important. It’s a magic moment. In the future, there’s going to be more digital fashion shows. It’s nice to open the door for a different crowd. Sometimes I feel that the people in the front row are bored and those on the outside are excited.”

Rousteing said he’ll be at an H&M store in Paris for the collection’s Nov. 5 launch. “It’s important for me to be close to my fans,” he said. “I’ll be in the middle of the store. I might have a little bit of a talk. I haven’t decided yet.

“Ten years ago, I was queuing for the Karl Lagerfeld for H&M launch,” he recalled. “Now people will line up for me.”

Rousteing, who celebrated his 30th birthday in September, is marking the occasion again next week with a party at a private home in Laurel Canyon in Los Angeles. Asked who will be there, he said, “All my friends — and you know who I’m talking about.”