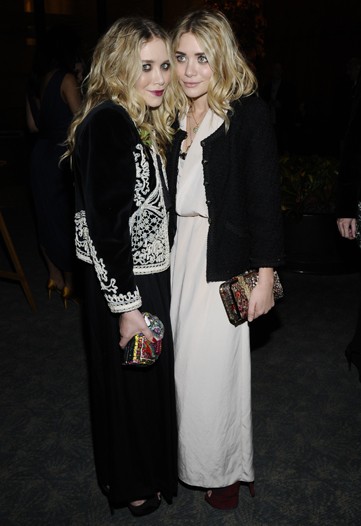 Mary-Kate and Ashley Olsen are expanding their fashion reach.

The sisters, entertainers and marketers almost since their infancy who last week became members of the Council of Fashion Designers of America, have signed a deal with J.C. Penney Co. Inc. to launch Olsenboye, a junior brand that will be exclusive to the chain.

The collection will have a major rollout, set for 600 Penney’s stores in February. But the company aims to generate curiosity among teens well before the launch with what amounts to a new marketing approach for the retailer built around previews, limited offerings and digital, guerrilla and viral marketing tactics.

The effort kicks off Monday with an Olsenboye truck cruising around New York selling merchandise and giving out cupcakes, balloons and pins, and empty racks in 50 high-profile stores will be covered in Olsenboye shrouds. Beginning Nov. 6, Olsenboye will be available on jcp.com and in those 50 stores, including the Manhattan flagship, for a limited time.

There also will be a teaser video for the preview collection on olsenboye.com featuring teen characters.

For the full launch in the spring, there will be broadcast spots, magazine print ads and direct-mail pieces. There also will be an interactive digital campaign on jcp.com, Penney’s teen Facebook page and Twitter.

For the last several seasons, Penney’s has been unleashing new labels and designer exclusives while culling out brands that have lost relevance, striving to modernize its image, catering to more of a teen and contemporary crowd and offering something different.

Among its consumer base, “the propensity for trying and adapting new brands is terrific,” said Liz Sweney, Penney’s executive vice president and general merchandise manager of women’s. “We are stepping up our style to attract a younger customer” with such recent launches as Bisou Bisou, I [Heart] Ronson, Allen B., Oxford & Regent and Twelfth of Eleven, all contemporary lines done in collaboration with designers and brands. Last month, Penney’s launched its first contemporary label, called she said, created by its own design team. Arizona and Decree are among the key junior brands at the store, but the retailer also still sells more traditional lines geared to a more mature crowd, such as Worthington, and has just signed a deal with Liz Claiborne Inc. to be the exclusive retailer for the Liz Claiborne line. “We love our older customer, as well,” Sweney noted.

When it comes to price, however, Penney’s has maintained its moderate, value-driven, promotional posture. Olsenboye, which is the Olsens’ ancestral name, will fall into Penney’s good and better price tiers. Olsenboye is a casual sportswear and accessories collection that includes denim, bottoms, tops, dresses, skirts, shorts, jackets, handbags and shoes. The line will retail from $20 to $50 and is being designed to be mixed to create different looks. The brand also will periodically flow in travel-inspired mini collections, each reflecting the looks and trends of different cities.

While it’s got the Olsens’ spirit, it’s not limited to their size, ranging from sizes 0 to 15. “It’s really important that Olsenboye serves lots of girls,” Sweney said. “It’s not just about girls size zero or one.”

The Olsens, who are 23, haven’t penetrated the middle market yet with a collection, but do sell to luxury stores with The Row for men and women, and their contemporary label, Elizabeth and James. But they have been marketing clothes, furniture, cosmetics and other products to mass retailers such as Wal-Mart for years through the company they own and for which they design, Dualstar Entertainment Group.

“Mary-Kate and I watch current trends and see our partnership with J.C. Penney as an opportunity to add something unique to the marketplace, especially in the current retail climate,” said Ashley. “Olsenboye is an extension of the Dualstar brand and we feel this collaboration complements and strengthens our business portfolio, delivering trend-based fashion at affordable prices.”

Regarding the various initiatives to market Olsenboye, Mary-Kate said: “Ashley and I felt strongly about creating a unique experience to reach the teen customer, using relevant marketing strategies that would effectively reach this key customer demographic.”

According to Sweney, the Olsens came to Penney’s with the Olsenboye concept. “They actually contacted us,” she said. “They knew we had a wider reach, that we can provide a great digital experience and that we know how to treat brands and that their brand would be pure in our store” and not be “Penney-ized.”

Penney’s remains mired in the recession as much as any of its competitors. On Friday, at an analysts’ meeting, Myron “Mike” Ullman 3rd, chairman and chief executive officer, said, “Clearly the consumer is still under enormous pressure,” though the company is starting to see “some stabilizing and modest improvement in traffic.” It’s 1 to 2 percent down these days, he said, from more than 3 to 5 percent in the summer, and higher before. “We are a bit more upbeat about the opportunity to sell.…We are confident in our ability to execute against last year’s trends. Competitively, we are doing well.”

The company has been hurt mostly by weak jewelry and home sales, but has seen improvement in the textile, bedding and window-covering businesses in the last 60 days.

Jewelry remains difficult, ahead of its profit plan but behind in the sales plan, Ullman said.

Penney’s officials said the new Manhattan store is exceeding plan and, based on its early success, the company is encouraged to pursue additional inner-city opportunities. According to Ullman, the Manhattan store is not cannibalizing the Bronx or Queens units, and they are producing comp gains. As a result, Penney’s has had its eye on Brooklyn and Dallas (inside the Beltway, where there are two million people). One source said Harlem has been eyed, as well. Said Ullman: “One hundred fifty thousand people have moved into the Dallas inner market. Where we think there is a J.C. Penney customer, we are going after those opportunities.”

However, more capital will go into renovations, the Web and information technology than store openings, considering commercial real estate development has virtually come to a halt due to the economy. About 75 Sephora shops will be installed in Penney’s stores next year, and the company will use the occasion to remodel stores and renovate fitting rooms and bathrooms.

The lack of commercial development “allows us to invest in our existing fleet.…We are looking for opportunities now for inner-city locations, but if we compromise on the box size, it hurts us,” Ullman said.