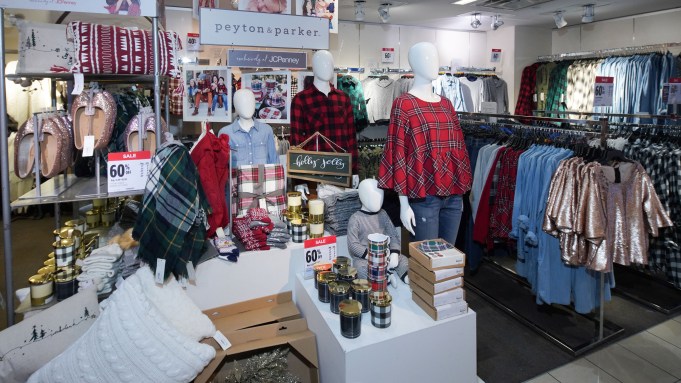 “This ugly sweater business gets bigger every year for holiday,” said Joe Cardamone, the general manager of the J.C. Penney store in the Manhattan Mall.

“We even have a Santa Claus two-piece dress, $29. It comes with a detachable hood. It’s unbelievable what people are into,” Cardamone said during a tour of the two-level, 90,000-square-foot store last Tuesday. Post-Black Friday weekend, “this whole shop will be wiped out,” of merchandise. “But we’ll keep flowing product in.”

Ugly sweaters, a growing phenomena nationwide, is one of the key looks Penney’s is banking on to get through the holiday season. Category-wise, toys, Sephora, fine jewelry, home and small appliances are expected to pace the business, and have been beefed up, as have “giftables” such as stocking stuffers and beer games.

Business has been poor for Penney’s this year, marked by declining revenues and profits, mounting concerns about its future and management changes including a new chief executive officer, making this holiday season far more critical than past years. More store closings are a possibility, and the Manhattan Mall space, on 32nd Street and Sixth Avenue, is being marketed for a potential sublease agreement. “We don’t have anything further to share at this time,” said a spokesman for the corporation.

Penney’s had a net loss of $151 million last quarter compared to losing $125 million a year ago, and comparable sales slipped 5.4 percent. “We are making progress and taking the necessary steps to right-size our inventory positions to better support the brands and categories that are demonstrating profitable sales growth,” said Jill Soltau, Penney’s new ceo.

Much of 2018 has been spent clearing out excessive inventories, focusing on fine-tuning the merchandising and ramping up items that have done better than others and eliminating stockkeeping units. Decluttering the stores has been part of the program, and not enough effort has been spent improving the apparel offering, though Soltau has a soft goods background unlike her predecessor at Penney’s, Marvin Ellison, who had a hard goods background.

Penney’s hopes to capture some of the business left behind by Sears and Kmart closings and the liquidations of Bon-Ton Stores and Toys ‘R’ Us. At most stores, consumer spending has been steady though the fall, and the November-December holiday period is expected to be up around 5 percent in total sales, close to last year’s gain.

On 32nd Street, “Inventory is much lower than a year ago and it feels great,” said Cardamone, a 44-year veteran of Penney’s. “You walk through the store and it’s not overpowering. We’re not going to be faced with the glut of a year ago. It’s more of a narrow-and-deep approach which has allowed us to hit areas that are really producing. There’s less stuff. We’re more in-depth on key items but we’re not cutting out any categories.

“Fine jewelry is one of our really bright spots for the whole year so we’ve upped ‘red bow’ deals,” which are jewelry packaged in boxes with bows already on them. “Every category of jewelry has a red bow offering,” such as diamond pendants priced $25 from $125. “We will sell a ton of those,” Cardamone said. There are also one-carat diamond rings set in gold, priced down to $499.99 from $2,100 and sterling silver bracelets at $129, marked down from $749.

Penney’s “biggest sale of all” launched the first weekend of November, kicking off the holiday season similar to the timing last year for holiday promoting. This year, there are more doorbusters. “It was watered down for the past two years. We really brought it back to the way it should be,” said Cardamone.

He also said the company this season is “a lot sharper’ with percent-offs, with a range from up to 80 percent off on fine jewelry, to 30 percent in apparel.

Some aspects of service were enhanced. “We have more cashiers, 20 percent more,” noted Cardamone. “We will have all 60 cashiers open during peak periods,” from 11 a.m. to 8 p.m. He also said associates have mobile checkout devices called “mobile warriors” and that omni-operations have advanced so Penney’s can ship online orders to stores and ship products from store to store.

Penney’s is also hoping for a strong response to its new Peyton & Parker line of family apparel and home products, as Cardamone suggested, men’s $40 flannel shirts, marked down to $16; ladies’ denim jeans, marked down to $21 from $54, and the cotton shawl-neck sweaters, priced $20 from $50, are seen as among the most popular items in the collection.

In active, Penney’s has been playing catch-up to the competition and strengthening ties with Nike Inc., which is being offered at 30 percent off for Thanksgiving Day and Black Friday, and reverts back to 25 percent off right after.

Despite the nation’s tight labor market, “Our whole holiday staff was hired in one day. I hired 100 associates. It’s never hard for us here in the city,” said Cardamone. The store operates with 360 associates.