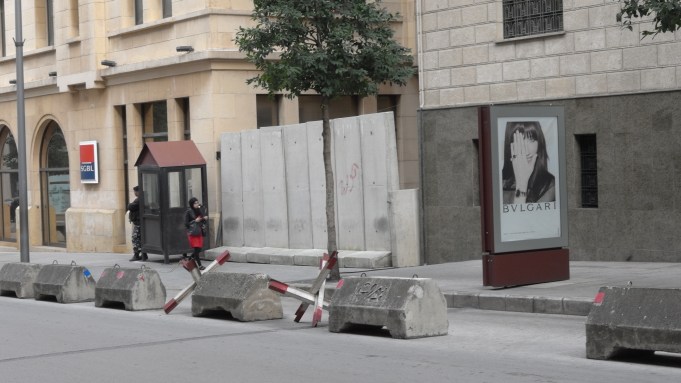 BEIRUT — There is no doubt that this city’s Central District area remains one of the most elegant and upmarket shopping zones in the world — and one of the most fascinating. Everything one expects from this extravagant city can be found here: lavish boutiques, limited editions of the latest models of European luxury cars (as well as vintage versions), smartly dressed crowds, luxury cafés and restaurants; all intertwined with breathtaking, ancient archeological sites and Parisian-style promenades.

In the past, this grand neighborhood covered the entire marble and granite center of the city, overflowing in all directions and climbing toward Nejmeh Square and Capuchins Street. Here, remains of Phoenician, Hellenic and Ottoman palaces faced boutiques for Prada, Louis Vuitton and other luxury brands.

But now the streets of downtown are eerily empty, cut in the middle by threatening-looking security checkpoints and concrete block barricades. There are tanks at major intersections. Security forces are heavily armed and ready to shoot — with reason to be fearful after two suicide bombings in June alone, one in Beirut and the other near the border with Syria. These followed a suicide bombing last November in southern Beirut in which 43 people were killed.

The luxury boutiques and trendy cafés are still standing, at least some of them. But hundreds of others have closed their doors.

“This is the end of Beirut as we know it,” lamented a seller of Cuban cigars near Nejmeh Square. “Who comes here these days? Nobody comes.”

Rima Khodr, a shop assistant at the Manga store downtown, is not at all certain about the future of her job. “Our shop has been hit hard, with the number of customers decreasing, literally on a daily basis. With this crisis I think people are worried about the security situation so they stay away from the city center. I myself am worried about my job security as I could lose this job at any time. It is bad for all of us these days, whether you run a shop, work in a shop or are a shopper.”

Lebanon is suffering from lack of a unified government, the influx of more than 2 million refugees, and from the battle against ISIS, in the northeast of the country. Last month, the United Nations Security Council warned that it was “critical” for Lebanon to elect a president and a parliament and form a unified government by May 2017 to withstand all the challenges it faces.

Amid it all the Lebanese economy continues to shrink, with some fearing it is on the brink of collapse. Tourism, a key plank of the economy, has shriveled, as has construction. Fitch last month downgraded Lebanon’s debt to B- from B, although it maintained its “stable” outlook. Fitch forecast that the Lebanese economy will grow less than 2 percent this year, with no significant uptick expected until the end of the war in Syria.

“Is this city really the Paris of the Middle East?” a local designer said, smiling sadly and referring to the nickname the capital city gained decades ago for its mix of French and Middle Eastern cultures; beautiful architecture and stylish women. She is seated at a trendy vodka bar inside of what used to be the city’s historic train station.

“But Paris is a social city, while in Beirut, there is nothing social or public left anymore,” she continued. “Imagine Paris without its metro, trains and buses; where everything is private, where nothing works. Paris with blackouts and water shortages, and garbage rotting by the side of its streets. Here, only the prices can be compared to those in Paris, although they are much higher here.”

Dr. Salim Chahine, a professor of finance at the American University of Beirut, is usually at least moderately upbeat about Lebanon. But the developments of recent years have rubbed off even his optimism.

“Although the Coincident Indicator issued by the Lebanese Central Bank, BDL, has recently suggested a slight enhancement in economic activity, several officials are sending clear warnings about further deterioration of the situation,” he told WWD. “The regional geopolitical tensions, the civil conflict in Syria, as well as their implications internally have impacted tourism, trade, and the real estate sectors. According to HSBC, deposits from Lebanon’s largest expatriate population — which usually provides the necessary liquidity for the government’s borrowing — may grow at a slower rate in the near future given the worsening conditions in the Gulf. As the country enters in its sixth year of economic slump, HSBC remains skeptical about a short-term recovery. The public deficit is currently rising by around 20 percent per year, and the GDP growth rate is close to zero.”

Tiny Lebanon — about the size of the U.S. state of Delaware — is no stranger to conflicts and calamities. Decades ago it lived through the enormous influx of Palestinian refugees, then through the battles with Israel, and with devastating civil and sectarian wars. Now the arrival of more than 2 million mainly Syrian refugees into a country with a total population of only 4.5 million is stretching its inadequate infrastructure to the extreme.

Poor refugees are living all over the Beqaa Valley, mostly in miserable makeshift camps. On the coast, entire families are crammed in tiny rooms in Beirut, Tripoli and other cities. Those who have money are renting houses and apartments. Some are begging or sending their children to sell candy at major intersections.

Last year, huge protests shook Beirut. Residents were reacting to the piles of garbage covering almost all the neighborhoods of the capital. “You Stink!” was the motto of the rebellion, referring not only to the garbage but also the country’s government and the entire political-economic situation.

“We want the end of sectarianism,” protesters were shouting. “We want one united Lebanon.”

But even as the country teeters on the brink, construction cranes continue to add expensive condominium units, luxury cars are parked everywhere and the Beirut Zaitunay Bay Marina is dotted with enormous private boats and yachts. All this is mainly serving those Lebanese expatriates who are using Beirut as their second home or a retirement place. This is where the families that are “left behind” are staying.

Fears grow over further terrorist attacks, and suspicions increase that cells of ISIS terrorists are already in Beirut, waiting for the word to carry out a bombing.

“Those who are fighting on our territory know that Lebanon has a huge vacuum now, politically and militarily,” one local financial expert said. “Imagine that we have not even been able to find solutions to our garbage problem. Lebanon is so weak now. Anyone can move in and exploit the situation.”

Wassim Bassil, an employee at an international organization in Beirut, also laments the situation. “I used to enjoy shopping and going out until very late at night but now it doesn’t feel safe anymore. I still go to malls when I need/want to buy clothes but I go there very quickly and come out without spending much time. You never know what could happen. Besides, the economy is not good in Lebanon. Shops seem empty or are not well-stocked, and things are much more expensive than before.”

Mohamed Eldaly, an engineer working at an international company in Beirut, agreed. “Nowadays you can find very expensive, modern stores in Beirut, like those in Europe or the USA. We enjoy shopping but it is not sustainable given the state of our economy and the amount of money people carry in their pockets. When I was small, my family used to go to Syria for shopping because things were very cheap and of quality. And in Lebanon we used to get so many things from Syria. Now it is difficult to travel there and also to get a hold of Syrian products, due to the civil war there.”

Whenever tragedy strikes, the city shakes and unites, at least for a few days or weeks. Zeinab Al Saffar, a prominent socio-political talk show anchor and producer with Al-Mayadeen TV, declared one day after the carnage in November 2015: “I think that after what we’ve seen and witnessed… apart from the huge losses… our people are now more deeply rooted in their national resistance… Believe me: we are strong. And we will remain steadfast and strong.”

But the question is in what form Beirut might survive. The political, economic and social turmoil is like nothing the city has ever seen. Multiple arrests of individuals who are alleged to have ties with terrorist organizations happen on a daily basis.  U.N. and diplomatic missions are warning their workers and families to stay away from public areas including major malls and shopping areas.  Analysts predict the next terrorist targets are likely to be in downtown Beirut, which had suffered significant damage during the all the previous conflicts. Fully restored with numerous designer boutiques, the area has already been hit hard by security threats and has seen Lebanese shoppers stay away almost completely to the point of contributing to the shutting down of many stores in the area.

“Lebanon is a service-industry country,” said Naela Haddad, a 30-year-old who works in the finance industry. “But due to Lebanon’s own internal turmoil as much as that of Syria-related crisis, Lebanon in general and Beirut in particular have become extremely dangerous places. I was born and raised here. I grew up being told by my parents, grandparents and relatives about bombs, evacuations, assassinations, etc. So I am, in a way, supposed to be used to danger; it is nothing new in Lebanon, so to speak.  But now, things are different. My office is in downtown Beirut.  I don’t want to walk around there unnecessarily because you don’t know what happens next. I often feel scared even of the fellow pedestrians. She or he could carry some explosives and wage some attacks against passersby or me. Who knows? The bank where I work, too, is not doing well. As the Prime Minister has said, ‘We are moving toward collapse.’”